Day of the Dead (Día de Muertos) Posted by sasha on Oct 25, 2017 in Uncategorized

While people in many western countries attend parties and go trick-or-treating to celebrate Halloween, Mexico begins its traditional celebration of Día de Muertos (Day of the Dead). Although the two holidays happen at the same time, they are actually quite different. Today we’ll take a closer look at this important holiday, starting with its origins. 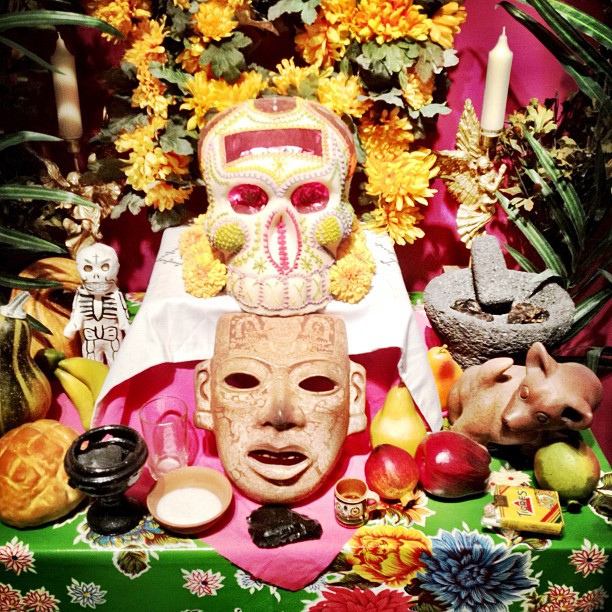 Image by Pelle Sten from flickr.com.

It’s believed that the origins of Día de Muertos go back thousands of years to an Aztec festival dedicated to Mictecacihuatl. She was the goddess of the underworld, with a name meaning “Lady of the Dead.” This festival took place in the ninth month of the Aztec calendar, which was usually in August. After Spanish colonization, the holiday began to be associated with the end of October so that it would coincide with the Christian celebration of Allhallowtide.

The multi-day holiday is meant to remember and honor the dead. This is not a mournful time, though – it’s meant to be a celebration of the people and the lives they lived. The idea is that if the dead returned to find everyone all sad and depressed, they would be quite disappointed. As you will soon find out, Day of the Dead is quite festive and colorful. This traditional holiday even made the UNESCO list of the Intangible Cultural Heritage of Humanity in 2008.

It’s believed that the gates of heaven are opened at midnight on November 1st, when the spirits of deceased children are allowed to return and visit family. That’s why this day is often referred to as Día de los Inocentes (Day of the Innocents) or Día de los Angelitos (Day of the Little Angels). The next day, the spirits of adults will join the festivities.

Learn more about the Day of the Dead in this great video.

There are many customs and traditions associated with the Day of the Dead. It’s one of the most important holidays in Mexico, and thus people often spend a lot of time and money getting ready for it. Families will visit the cemetery to clean and decorate the graves of loved ones. The most popular flowers to use are cempasúchil, which are also known as Flor de Muerto (Flower of the Dead) or Mexican marigolds in English. Some leave a path of flower petals from the grave to the home to help guide the way for the returning spirits. Many families even spend the night in the graveyard, where they share stories and jokes in remembrance of the dead. 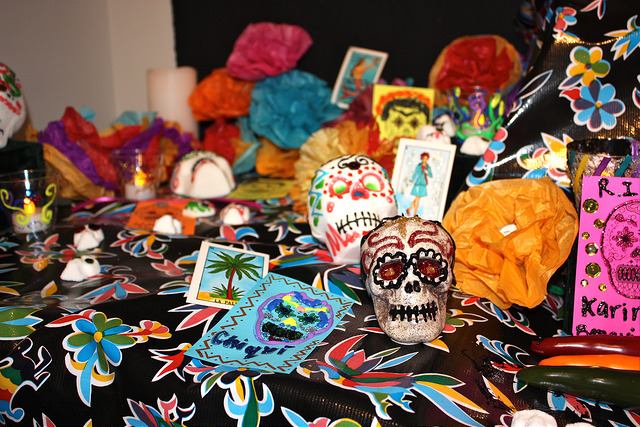 Image by Thacher Gallery at the University of San Francisco from flickr.com.

One of the biggest traditions for the Day of the Dead is building an altar at the gravesite or at home. These are called ofrendas, and they’re full of not only flowers, but also incense, candles, pictures, and more. The dead even get their own bread – pan de muerto (bread of the dead). It’s a sweet bread that is often made with bone-shaped pieces. Spirits of children receive toys, while those of adults are left some cigarettes or mezcal instead. It’s all about welcoming the spirits into the home and paying tribute to them.

People tend to go all out on the ofrendas, with some families spending up to two month’s worth of their income to prepare for the festival. As the spirits of the deceased are believed to provide protection and good luck, it’s a worthy investment. If you don’t honor the dead, it’s believed that they could bring about sickness or even death.

In a festival celebrating the dead, it should come as no surprise that you see a lot of calaveras (skulls) and calacas (skeletons). All across Mexico, people make or purchase elaborate calaveras de alfeñique (sugar skulls) for the festival. Don’t get too excited, now. These aren’t like gingerbread men and are not meant to be eaten. The name of the departed is usually etched on the forehead and the skull is placed on the ofrenda. 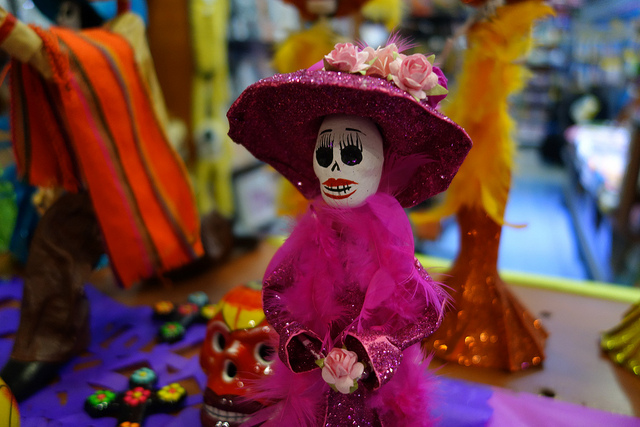 Image by Paul Simpson from flickr.com.

One of the most famous skulls associated with the holiday is La Calavera Catrina (the Elegant Skull). This was created by an illustrator named José Guadalupe Posada in order to satirize Mexicans (especially politicians and the upper-class) who were aspiring to be more European. He introduced the character, but Diego Rivera made her famous in his mural Sueño de una Tarde Dominical en la Alameda Central (Dream of a Sunday Afternoon Along Central Alameda). She is now a major symbol of the holiday and can be seen all across the country in various designs.

A more modern tradition provides a great example of how this holiday has evolved over the years and soaked up different influences. Thanks to the James Bond film “Spectre” and its depiction of a Day of the Dead parade in Mexico City, CDMX decided to go ahead and throw one.

See some highlights from the first massive Day of the Dead parade in Mexico City.

For those of us who come from countries where death represents mourning and sadness, Día de Muertos and the customs around it provide a great example of how to celebrate life rather than mourn death. While many of us dress up in silly costumes for parties this weekend or take our kids trick-or-treating, let’s also look to our next door neighbors and their colorful and festive celebration as a valuable cultural lesson in how to think about and deal with death.