Summer is here and for many of those, this means we can eat outside enjoying el clima cálido and nuestros jardines. In this post, I want to explore barbecue related vocabulary and give you some consejos on how to make your cook out más Mexicano! 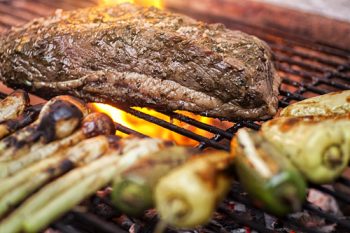 I grew up in the Texas-Mexico border and carne asada or barbecue is king there! The beef eating culture extends from Texas all the way to the Mexican states of Tamaulipas and Nuevo Leon where many people have ranches and raise cattle. This area is predominantly desierto or desert and the variety of vegetables is traditionally small. This makes beef a very important part of people’s diet in addition to tortillas de harina (flour tortillas) and frijoles (beans)!

I would like to emphasise that these tips are based on the region where I grew up. Like all countries and cultures, Mexico has so many varieties even within individual states and a carne asada in Mexico City is very different from one in Tamaulipas or one in the southern states like Chiapas. But despite these differences, you will see some strong similarities, even with those in your country!

First things first: la carne! If you’ve even been to a Tex-Mex restaurant or if your grocery store has a Tex-Mex section, you have heard of fajitas. Fajitas are basically strips of meat or chicken seasoned with spices and cooked on the grill. Traditionally, fajitas are made with the cut of mean called skirt or arrachera. This is the part below the ribs and is considered to be a cheaper cut than say sirloin. To soften the meat, you can marinated it in beer or with some lemon and olive oil together with the seasoning. In Texas, you can easily find good quality fajita seasoning with ingredients such as sal or salt, pimienta or pepper, ajo or garlic and cebolla or onion.

Now for the sides or guarniciones which is my favorite part, particularly because these tend to meat free. Guacamole is a very popular and standard staple. I like to make mine with 2 aguacates, media cebolla picada or finely chopped, un tomate pequeño picado, un poco de jugo de limón, sal y pimienta. You can also add cilantro or coriander and garlic, but if you have good avocados, you don’t need anything extra! A good salsa is also a must. I can’t eat anything spicy, so its best to follow an expert’s recipe. Check out the video below for 3 very good recipes for salsa. He uses animal fat for the salsa which is a first for me, but I am sure you can skip that for a vegan version.

Your tacos need variety and texture so make sure to grill some vegetales such as elote (corn), pimientos (bell peppers) and cebollitas (spring onions). You can put these straight on the grill with some salt and pepper and let them burn a bit. My mom likes to make onions on the grill. You season the onion with salt, pepper and olive oil, wrap it in foil paper or papel aluminio and place it around the coals or carbones to cook. You will get a creamy sweet onion.

My all time favorite guarnición has to be frijoles. These are two very common dishes:  frijoles charros  and frijoles borrachos. These two are very similar dishes, however, the borracho beans are cooked with a bit of beer in addition to the tocino (bacon), salchicha (sausage), chorizo, cilantro (coriander), cebolla (onion), ajo (garlic) and chiles. Below is a very easy recipe to follow for frijoles charros.

We fortunately live in a time with lots of non-meat options for those who do not eat meat or who eat mostly vegetarian. You can still have the carne asada experience without the meat by seasoning several vegetables with the same fajita seasoning you would have used for the meat. My go-to veggie for a carne asada vegetariana is certainly nopal or cactus. It has a very similar bite to meat with a lot of nutrients. Below is a video of how to cook nopal. Although these nopales are being cooked on a pan, you can easily do this on your grill or asador.

Is it common to have vegetarian or vegan options in barbecues where you live? What platillos would you also include when grilling?