My Favorite Spanish Words Posted by Karoly Molina on Mar 28, 2019 in Uncategorized

I am a sucker for those posts of the top 10 untranslatable words or the most beautiful words in _____ language! As a lover of words and language, these type of posts give me insight to new words as well as remind of words I had perhaps stored in the back of my mind. With this fascination in mind, I decided to write my own list of favorite words in Spanish! Please join the conversation by adding your favorite words in the comments! 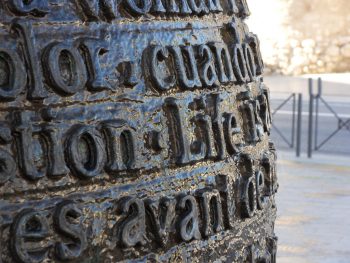 Photo taken by Yon Mora found on Flickr.com with license CC BY 2.0

I am a big fan of the ritual of eating. From the preparation of the meal to the actual savoring of the food to the best way to extend dessert: sobremesa. Sobremesa is the talk that occurs after eating while, this extension of dinner full of rich conversations, maybe an extra glass of wine or coffee and lots and lots of laughter. The RAE defines sobremesa as “tiempo que se está a la mesa después de haber comido,” but honestly, this definition falls short of the experience.

When I moved to the Netherlands, I was happy to find that the Dutch also have a word for this that is pretty much a direct translation (natafelen). In English, we do not have an equivalent. Do you know of any other languages that have a similar word for this “after table talk”?

For me, this word’s length only enhances the meaning of if. Inconmensurable means something so big that it cannot be measured. Even just saying the word on its own evokes a sense of nostalgia, a gasp for air, the sheer length of it emphasising the inability to measure it. While writing this post, I found the song below from the Argentinian indie group Alfonsina.

I come from a family of big laughers. When anyone in my family laughs, people hear it. We don’t do soft giggles or just smiles. When we find something funny we laugh a carcajadas. The RAE’s definition is risa impetuosa y ruidosa and that is exactly how I think laughter should be: shaking and loud. In Latin cultures, carcajadas are socially acceptable most of the time, but in other cultures, that isn’t the case. Eventhough in Mexico I was never considered to be such a loud laugher, in the Netherlands, I’ve made a few heads turn with my carcajadas.

Abrazos (hugs) and apapachos are two very different thing. A hug is the physical act of putting your arms around someone, while an apapacho is not only to hug but to give love and sometimes even a type of emotional healing. When a young child falls and doesn’t get hurt, he/she will sometimes still cry because they were scared. The child will run to one of his parents to be hugged and comforted. That is an apapacho. After a long day, when you get home and seek refuge in the comfort of your partner’s arms and company, that is an apapacho. The act of giving such comforting is apapachar. Every time I call my grandma, she says she can’t wait to apapachar me on my next visit to Mexico.

Ojalá is not just a word but its also an expresion. Ojalá means the wish for something to happen, similar to hopefully. There are other variations of ojalá. Si Dios quiere is a common variation for those who are religious. When someone tells you that they are working really hard to accomplish something, something that could very well go wrong, when their chances of actually achieving it might not be so high you can answer with Ojalá! This word can also be used when the chances are good, if you want to show empathy share in on the hope that things will get better.

What are your favorite words in Spanish? Please share them in the comments below!