My Top Songs in Spanish Posted by Karoly Molina on Dec 12, 2019 in Videos

It is that time of the year when Spotify creates a playlist with our favorite songs of the year. Given my very varied taste, my list is filled with all sorts of genres and languages. In this post, I will explore a few of my favorite songs in Spanish by Mexican artists. 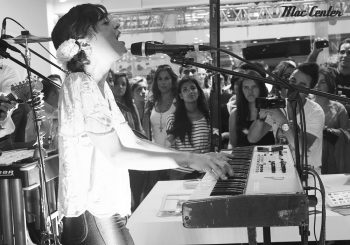 Photo taken by Anamaria Pino found on Flickr.com with license CC BY 2.0

One of my favorite cantantes is Natalia Lafourcade. There is something about her voice or voz that just captivates me, and her songs are always filled with depth without loosing its whimsical feel. Natalia’s solo career began when she was just 17, and her first album was nominated to a Latin Grammy. Her more recent work includes the song “Remember Me” for the Disney movie Coco and a remake of her song Nunca es Suficiente with Los Ángeles Azules (more about them below).

Natalia’s voice is easy to understand even when you are in the beginning stages of learning Spanish so I would highly recommend any song of hers to practice. I previously included one of her songs in a post about La Llorona.

She released the song Tú sí sabes quererme or you know how to love me in 2017. The song starts of with the following letra or lyrics:

León Larregui is the vocalist for the Mexican rock band Zoé. He has taken a few breaks from the band to release his solo songs and has done quite well. Como tú  was released in 2012 and is written and composed by him. The song has three very catchy sections. The lyrics are below:

The lyrics to this song are not very complicated and the cheerful beat make it a great sing-along! If you want lyrics with depth, I would suggest you take a look at Zoé’s songs, especially their unplugged CD. Below is the video for Como tú.

Los Ángeles Azules is a very popular Mexican group who play some of the most famous cumbias in Mexico and have been around since 1976. No party or wedding in Mexico is complete without a few of their songs, and, if you lived in Mexico for even a few years, you might know a song or two from them. In 2018, they performed at Coachella in the U.S. making them the first cumbia group at the event.

While Los Ángeles Azules have been popular for a very long time, they have recently been making canciones or songs with artists from other genres. In 2018, they collaborated with several artists to release an album of remakes, cumbia style. In 2019, they released the song below together with famous Mexican pop singer Belinda, and Colombian reggaeton singer Lalo Ebratt. Below is the video of this very successful mix of styles.