Colombia, the country that’s been in civil war for half a century, is on the verge of brokering an unprecedented peace deal with the rebel Fuerzas Armadas Revolucionarias de Colombia or FARC. Whether the deal holds up and if the pueblo colombiano benefits in the long-run will remain to be seen, but the nature of this deal is unique in many ways. It also presents a relevant opportunity to practice some Spanish vocabulary for talking about armed conflicts and their resolution.

If you’re not familiar with the conflict, here’s a YouTube video that summarizes it well (if it’s too fast for you, click the settings icon to adjust the speed a bit):

The conflicto armado interno in Colombia is the internal political and military conflict that began in 1960 and continues in Colombia today. Over its 55 years it has resulted in over 220,000 deaths and an astounding 6.5 million internally displaced persons, or desplazados internos, the proportionally largest internally displaced population of any country in the world.

The conflict began primarily as an ideological dispute between the left and right and was exacerbated by world powers during the Cold War. The roots of the modern-day conflict can be found in a period known as La Violencia, the ten-year civil war between the neoliberal Colombian Partido Conservador and leftist Partido Liberal. The conflict began with the magnecidio of the presidential candidate of the Partido Liberal in Bogotá in 1948. This assassination of the leftist political candidate led to ten years of ideologically-fueled conflict, mostly in the rural areas of Colombia.

Half a century later the conflict bears little resemblance to its origins. The FARC, the leftist militia that ostensibly aims to promote economic equality and diminish Western influence in Colombia, is listed as an organización terrorista by many governments, including the United States and many Western powers. Left-leaning Latin American governments like those of Ecuador, Brazil, and Venezuela deem the FARC instead a grupo irregular or grupo beligerante, acknowledging the violence caused by the separatist group but stopping short of naming them outright terrorists. The FARC has been known to fund itself through kidnapping and el narcotráfico, among other illegal means, and to target Colombian civilians. 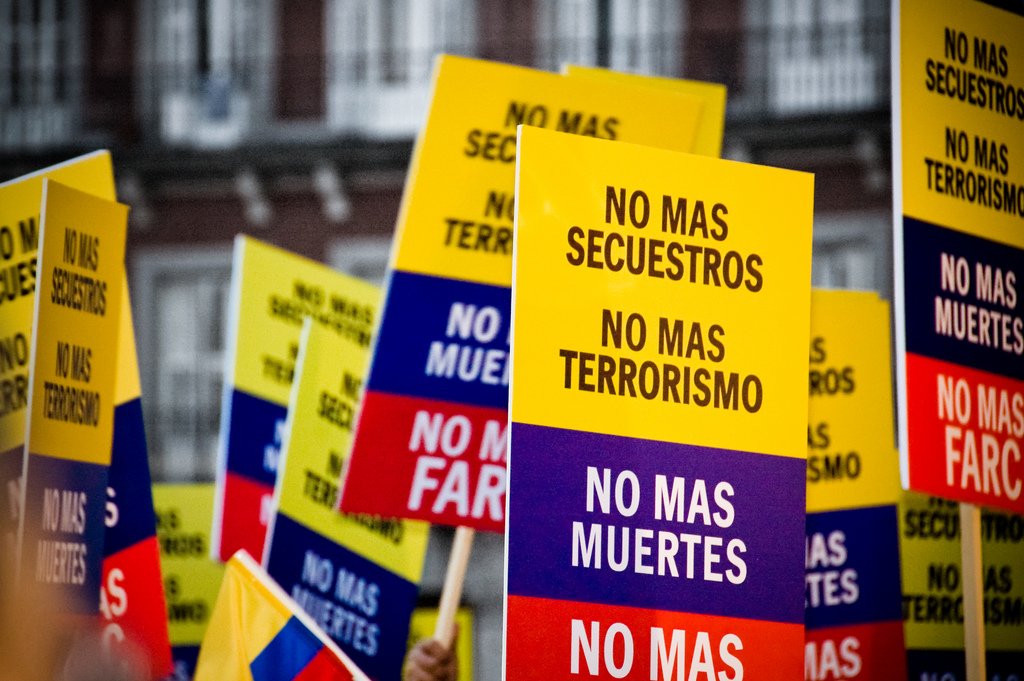 Protestors against the FARC in faraway Spain. “No more kidnappings, no more terrorism, no more death”.
Photo by Camilo Rueda López via Flickr under Creative Commons BY-ND 2.0.

The peace process has been facilitated under the administration of current president Juan Manuel Santos of the center-right Partido Social de la Union Nacional. Since 2012, FARC attacks and kidnappings have rapidly decreased, largely due to negotiations between the Colombian government, FARC, and regional powers. Earlier this year President Santos and FARC leaders met with Pope Francis in Havana, Cuba. There, a preliminary peace deal was made, and both parties committed to a permanent peace agreement within six months.

Several months later, the peace process is nearly complete, and members of both the FARC and the government have generally expressed satisfaction with the agreements. Some have praised it as a new model for conflict resolution because of a few key aspects of the agreement. Those aspects include a complex tribunal court that will try participants on both sides of the conflict, and the allowance for former FARC members to participate in government.

Iván Márquez, one of the top leaders of the FARC, released a lengthy statement, commending the groundbreaking peace deal while asking the people of Colombia not to forget the origins of the conflicts and what is still at stake:

The rhetoric from the far-left is heavy, at least equal to that from the far-right. Former president and current senator Álvaro Uribe of the right-wing Centro Democrático is leading the fight to stop the peace deal. He worries that it affords too many rights to the FARC, and that it signals the impending invasion of a leftist regime like that in neighboring Venezuela. He’s been actively attacking the agreement on Twitter:

The agreement is generally expected to be signed by both sides very soon, and if adhered to, would lead to disarmament of the FARC within 60 days of its signing. It is clear that many interests have a stake in the peace talks, and that the agreement is an unprecedented one in Latin America. What remains unclear is what it means for the future of el pueblo colombiano.

Vocabulario
la guerra: war
la guerrilla: soldier in a militia, guerrilla soldier
la víctima: victim
la izquierda/izquierdista: Left or leftist, in the political sense. Leftist values include economic and social equality and strong government regulation of corporations. Far-left groups like the FARC often adhere to communist values like state business ownership and supression of some civil liberties in the name of social justice.
el narcotráfico: narcotics trafficking
el pueblo: the people
las fuerzas armadas: the armed forces
el ejército: the army
secuestrar: to kidnap
asesinar: to assassinate
desplazar(se): to (be) displaced
derrotar: to defeat
terrorista: terrorist
grupo irregular: ‘irregular group’; a non-state actor
grupo beligerante: ‘belligerant group’; violent non-state actor
La Violencia: the ten-year civil war between the left- and right-wing parties in Colombia from 1948-1958 that resulted in many civilian casualties and political corruption.
la paz: peace
conflicto armado interno: armed internal conflict; in Colombia, one way of referring to the 55-year conflict between the government and separatist militias
conservador: conservative
liberal: liberal, as complicated a term in Spanish as in English — it can refer to political liberalismo (the affordance of civil liberties, participative democracy, and separation of state powers) or liberalismo económico or neoliberalismo (limiting the role of government in regulating trade and commerce)
magnecidio: assassination