Recipe of Venezuelan cachitos de jamón Posted by Anais on Apr 23, 2020 in Uncategorized 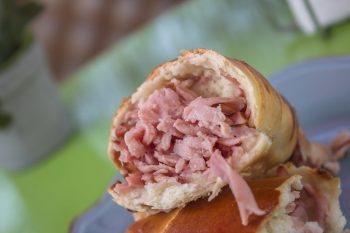 At these times of uncertainty and self-isolation, many people have discovered new passions to keep them busy, and making your own bread has become a new trend—if social media is to be believed.

Now, if you want to go the extra mile on the art of bread making, you can try this recipe that I am sharing today: cachitos de jamón (literally, little ham horns).

A beloved staple in Venezuelan homes, it consists of a croissant-shaped brioche bread filled with ham. They are mostly eaten for breakfast, and no decent panadería (bakery) can go without them.

The recipe is very simple and you may already have all the ingredients at home.

Just like any other bread recipe, we need to start by activating the yeast. Put the yeast, half the sugar, one tablespoon of flour and the warm (not hot!) milk into a bowl, whisk until dissolved and let it rest for 15 minutes. After that time you will notice a thick foam and some bubbles, which are good indicators that the yeast is fresh and good to go.

After 15 minutes, grab a big bowl and combine the flour, the melted butter (cooled down), one beaten egg, the yeast mix, the remaining sugar, and a pinch of salt. Knead until you get an homogeneous dough. If you notice that your dough is too dry, just add a tbsp of water. Place the dough on a flat surface with a bit of flour and continue kneading for about 10 minutes until the dough no longer sticks to your fingers and is soft, bouncy, and elastic. Put it back in the bowl, cover it, and let it rest for two hours in a warm environment or inside the oven (turned off).

After the two hours have passed, knead the dough again to release air and extend it flat with a rolling pin to form a circle of about 10 inches in diameter. Then, cut the dough into 8 triangles using a sharp knife, as if it were a pizza.

Stretch all the tips of each triangle, put the ham on the widest part of each one, and roll it up from the bottom (the widest part) to the top of the triangle, as you would do with a croissant.

Place the cachitos on a greased baking tray with the points facing down so they don’t come unrolled. Allow some space between each cachito as they will continue to grow during the baking process.

Cover the cachitos with a towel and let them rise for one hour in a warm place.

Pre-heat oven to 180 ºC (350 ºF). Brush each cachito with a mix of egg and a pinch of sugar, pinch them with a fork to let steam escape while baking, place them in the oven, and bake them for 15 minutes or until golden brown.

Make yourself a cup of café con leche (coffee with milk), sit back, and enjoy your creation.

You can fill your cachitos with a mixture of ham and cheese of your choice. Bacon is also a great match. Just be creative! 🙂

I’m leaving you this video for visual reference and listening practice.

Don’t forget to let us know how it went in the comments below!