Roma and Mexico’s Very Own Alfonso Cuarón Posted by Karoly Molina on Jan 17, 2019 in Uncategorized

Who has not heard about Netflix’s latest movie Roma? There has been so much talk of the movie and of its director Alfonso Cuarón, of the awards received and of the great movie it is. I recently saw the movie and was taken back by the story as much as by the amazing photography involved. Every shot was a masterpiece! Una verdadera obra de arte! 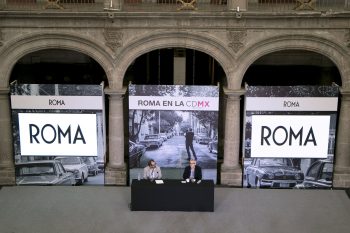 In this post, I will give you some “fun facts” of the movie and the people involved.

La Roma is actually one of Mexico City’s first suburbs. During the late 19th and 20th century, families with money who wanted to escape the hustle and bustle of the city center moved to La Roma. Because of this, there are several very big houses and mansions, some of which are still around. Unfortunately, after the terremoto or earthquake of 1985, many buildings collapsed or suffered great damage.

For many years, La Roma lost its popularity until “hipster boom” brought it back to life. Right now, it is one of THE places to eat and shop at thanks to the many small cafes, unique restaurants, and cute boutiques. Between La Roma and its neighboring and also very popular neighborhood La Condesa, you get some of the best of Mexico City.

In an interview Cuarón recently gave, he explained that the entire crew did not know the plot. The filming was done in sequence and the crew received the script for the day. At that moment, they would find out what would happen in the plot. I don’t know if this makes it any easier or better to film and act, but I find it mágico that we all learned more about the characters and the plot as the movie progressed.

The movie is mostly in Spanish with some indigenous languages spoken at times. Cleo and Adela speak to each other in a mix between Spanish and Mixteco. However, mixteco isn’t a language. It is actually a grouping of languages with a similar derivative of the people from the area in Oaxaca, Guerrero, and Puebla known as La Mixteca. The actress that plays Cleo, Yalitza Aparicio, speaks one of the mixteca languages, probably because she learned it from her father who is a Mixteca.

Netflix acquired the distribution rights or los derechos de distribución of the movie and premiered it in its streaming service. In Spain, the movie appeared with subtitles or subtítulos that translated it from Spanish from Mexico to Spanish from Spain. There was a huge outcry in Mexico about the subtitles. Because of the diversity in Spanish among the different countries that speak it, there tends to sometimes be a bit of animosity towards anything that insinuates we cannot understand each other. Alfonso Cuarón se quejó con (complained to) Netflix and the subtitles were removed.

From personal experience, I can’t say I’ve ever had any communication issue with anyone from another Spanish speaking country. There are, of course, some words that are not familiar, but this has never been an issue. Because of this, I can understand how subtitles in Spain would be upsetting, however, it is common practice. In the Netherlands, for example, movies from Belgium spoken in Flemish (Belgian Dutch) are always subtitled and vice versa. The differences between Dutch and Flemish are about the same as the differences between speakers from Argentina and Peru. Subtitles are also used between France and the French-speaking part of Belgium, Wallonia.

The following video shows some the ways the dialogue was translated from one Spanish to the other.

Did you like this movie? Should the movie be subtitled and translated to another Spanish?