Learning vocabulary can be very easy (I´m sure you remember the “Similar words in English and Spanish” post) because Spanish and English have lots of cognates, words with the same etymology and similar meaning. However, it can also be confusing because in both languages there are words with similar spelling or pronunciation, but quite different meaning: the so called in English “false friends”. Let´s begin.

Actual vs. Actual
Actual in Spanish means current, contemporary, nothing to do with the real or truly meaning in English.
– Mi situación laboral actual es terrible.
– My current work situation is terrible.

Carpet vs. Carpeta
A carpeta for us is a file folder, either physically or in a computer, something very different from your carpet or alfombra, which is the piece of cloth people put on their floor as decoration.
– Guardo todos mis documentos personales en una carpeta.
– I keep all my personal documents in a folder.

Deception vs. Decepción
Talking about decepción is our way to express our disappointment because things are not the way we wanted or expected them, whereas deception for Spanish people is engaño.
– Sufrimos una gran decepción cuando se canceló la fiesta.
– We were very disappointed when the party was cancelled.

Exit vs. Éxito
The exit is the salida, nothing to with the success that our éxito implies.
– ¡Esta canción es un éxito!
– This song is a hit!

Molest vs. Molestar
In this case, the Spanish cognate maintains the original meaning of bother or annoy, without the negative sexual implications.
– No molestes a tu hermano mientras está estudiando.
– Don´t bother your brother while he´s studying.

Nude vs. Nudo
To be desnudo is to be nude, naked. Just in case you are wearing a tie, you will have a nudo (knot) on it.
– ¿Sabes hacer el nudo a la corbata?
– Do you know how to make a knot?

Once vs. Once
The Spanish translation of once is “una vez”, so our fairy tales don´t begin “Once upon a time there were eleven dwarves… ” but “Había una vez once enanitos…”. And as you have probably noticed, once is our eleventh number.

Pie vs. Pie
You cannot eat a pie in Spain because you´ll be considered a cannibal: you´ll be eating a foot, not a delicious pastel lol.
– Me duele el pie con estas botas.
– My foot hurts with these boots.

Rope vs. ropa
Although they look very similar, a rope is something very uncomfortable to wear, nothing to do with the ropa or clothes. We´d better use a cuerda or soga () to tie things together.
– ¡Necesito comparme ropa nueva!
– I need to buy new clothes! 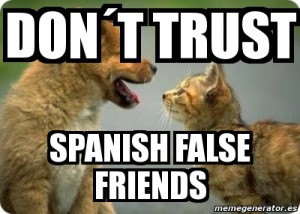