Studying Spanish in Medellín Posted by sasha on Nov 1, 2017 in Uncategorized

Spanish is the official language of 20 countries around the world. Of course, there are many differences in pronunciation and vocabulary between these countries. With so many different versions of Spanish, it can be overwhelming trying to decide on a place to study this wonderful language. One place that’s becoming more and more popular is Medellín, Colombia. Having spent the last month and a half here, I can confirm that studying Spanish in Medellín is a great experience. Read on for more about my time here and some of the benefits of studying Spanish in Medellín. 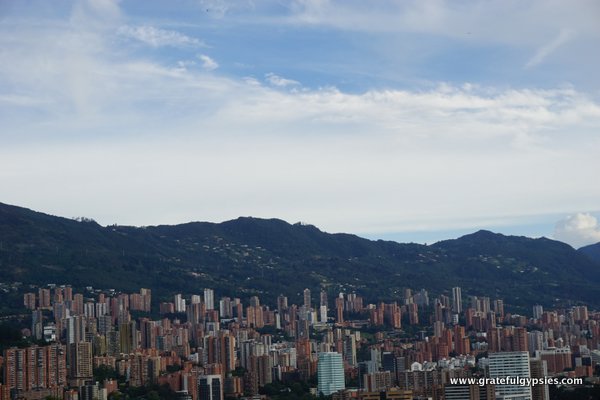 A view of the city from one of the many hills that surround it.

Of all the places one can study Spanish out there, what’s so great about Medellín? If you only know about this Colombian city from watching Narcos, it’s time to focus on the present and the future rather than the past. Go ahead and punch Medellín into Google, and you’ll find a whole lot more than old news about you-know-who. Here are just a few reasons why studying Spanish in Medellín rocks:

In just 25 years, Medellín went from being the world’s most dangerous city to the most innovative. Based on that stat alone, it’s very accurate to say: 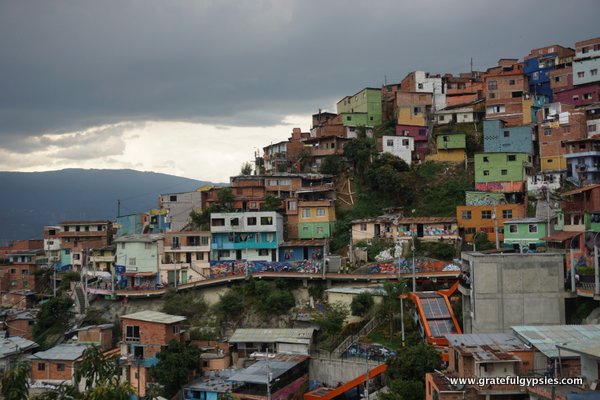 In places such as Communa 13, you can see this transformation up close. Not too long ago, this part of the city was incredibly dangerous. As our guide told us, “When people left the house, we never knew if they were going to come back.” This neighborhood is now one of the most popular areas of the city, known for its escalators and vibrant street art. Around every corner and with every story you hear, you’ll learn just how far this city has come in such a short time.

There’s no place with perfect weather, but Medellín sure comes close. With an average temperature of 22°C (72°F), the city definitely earns its nickname.

It rains quite a bit here between April-May and again from September-November, but it really isn’t that bad. In my six weeks here, most of the time it would rain for an hour or so and then clear right up. We’ve enjoyed plenty of sunny days and managed to spend a lot of time outdoors. Compared to Colombia’s other popular cities – Cartagena and Bogota – Medellín’s weather is fantastic. 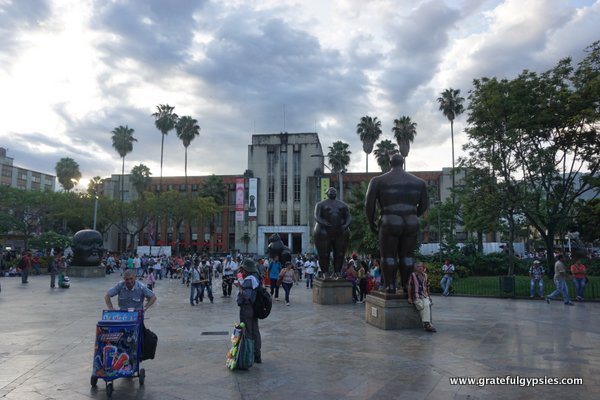 Super nice people all around.

Hands down one of the best parts about studying Spanish in Medellín are the people. Paisas (as people from this part of Colombia are known) are incredibly friendly and helpful people. Having locals who are easily approachable and eager to chat is a major benefit of learning Spanish here. And you’ll have plenty of chances to practice, because:

No muchas personas hablan inglés.
Not many people speak English.

Of course, many tour guides and other people working in the tourism industry can speak English quite well, but when you’re out exploring on your own you’ll need to use your Spanish all the time. Having previously studied in Puerto Vallarta – a super touristy town where it seems like everyone speaks English – I’ve found that I’ve used my Spanish far more often here in Medellín.

When it comes to the cost of living and of studying Spanish, you really get a great bang for your peso in Medellín. Compared to other popular South American destinations like Santiago, Lima, and Buenos Aires, Medellín is a bargain. Of course, staying here for a while and studying will cost you far less than it would over in Spain. You can easily find a nice place to live, sign up for classes, join a gym, and still have some money left over to go out for dinners and hit the bars once in a while. Now that you’ve seen some of the many benefits of studying Spanish in Medellín, I’ll share a bit more about my experience here. 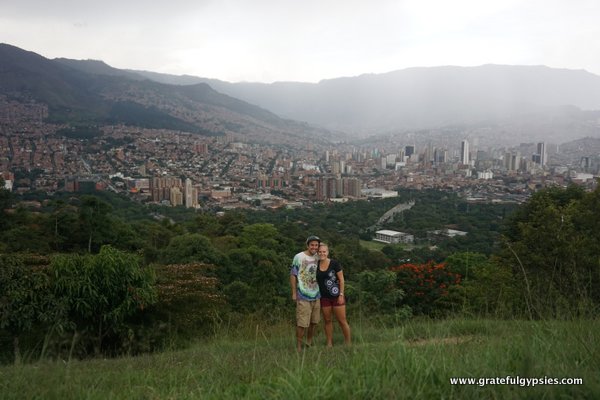 We’ve had a great time in the Spring City.

My wife and I have spent the past two months in Colombia. The first two weeks were spent traveling in Cartagena and Bogotá, and we then set up shop in Medellín for a while. After all we had read about Colombia’s Spring City in recent years, we knew we were going to love it here before we even arrived. That turned out to be true, and we’re already a bit bummed to be leaving as we continue on our travels around South America. With only a month and a half in the city, we decided to stay in two different neighborhoods so I could study at two different Spanish schools. 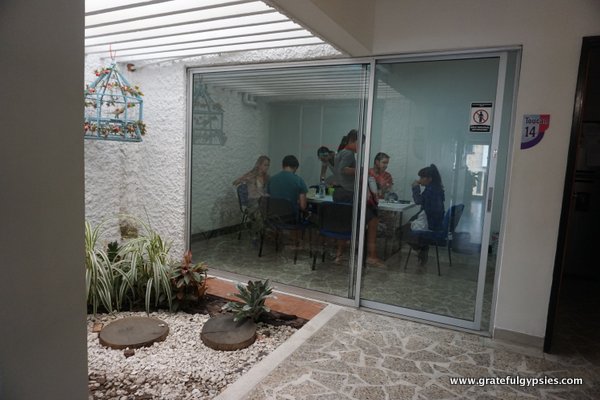 A classroom at Toucan.

For tourists and expats in Medellín, the most popular area is definitely Poblado. In fact, some refer to this neighborhood as “Gringolandia” for that very reason. We decided to spend our first week there to be tourists and to enjoy the dining and nightlife scene. Since it was just a short walk away, I signed up for a week of lessons at Toucan Spanish. On most days, there was only other student in the class with me. Unfortunately, two of our classmates got sick at the beginning of the week and missed several days. Bad for them, but great for us! Our teacher was excellent and very patient, and she forced us to use Spanish almost 100% of the time. 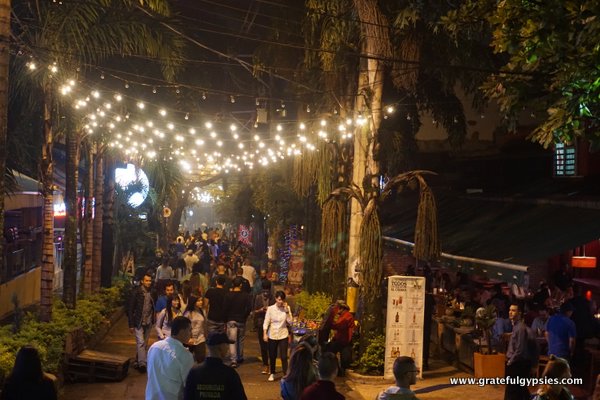 In addition to the classes, the center has a lot of activities going on. There’s a welcome lunch for new students, a free salsa class, a football game, a movie screening, and more. They also host two language exchanges a week (Tuesdays and Thursdays), where you can practice what you’ve learned in class and meet locals. Overall, I really enjoyed my week at Toucan. That being said, I knew that Poblado was not the place for us, as we were seeking a slightly more local atmosphere. 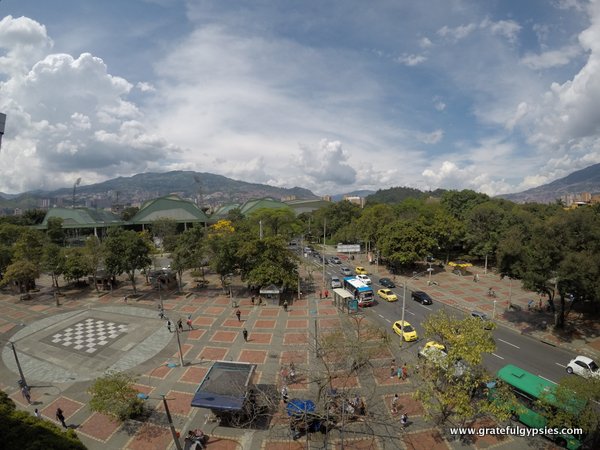 View from the Estadio Metro Station.

As such, we found an apartment in the Laureles neighborhood. Just a few minutes away from the football stadium and the massive sports complex that surrounds it, this part of town was the perfect home base. You can still find co-working spaces and a wide variety of cafes, restaurants, and bars, but you’re far more likely to run into locals than tourists. For my time in Laureles, I signed up for classes with Colombia Immersion. They also have a center in Envigado, so you have two options for where to base yourself in the city if you choose to study with them. 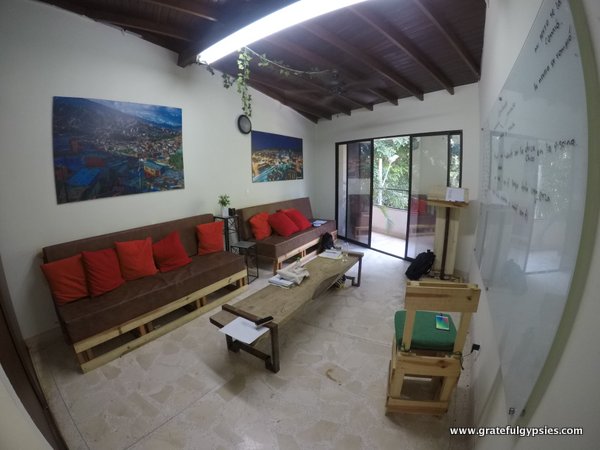 One of Colombia Immersion’s great classrooms.

One awesome thing about this school is that the classrooms look more like a living room than a traditional classroom. This creates a more relaxed atmosphere, which is good when you’re trying to learn a new language. Due to my work schedule, I had to opt for private lessons instead of group. My teacher did an excellent job in assessing my level from day one and finding out exactly what I needed to practice. He constantly challenged me and even gave me some homework assignments that required me to interview locals. In addition to picking up tons of new vocabulary and working on my grammar, I gained a lot of insights into Colombian culture and the turbulent past of Medellín through our sessions together. 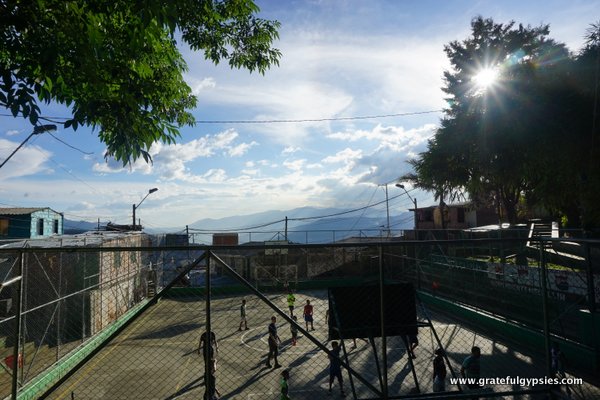 Playing football with local kids on a field trip.

There’s a lot going on outside of the classroom at Colombia Immersion as well. There are different events in each center every week, such as cooking classes or coffee tastings. The Envigado center hosts a huge language exchange on Friday nights that draws quite the crowd. They also take a field trip every week on Thursdays, where a teacher guides the group to visit one of the many interesting places in the city for an afternoon. The tour is done mostly in Spanish, and students are encouraged to practice with each other and locals throughout the tour. 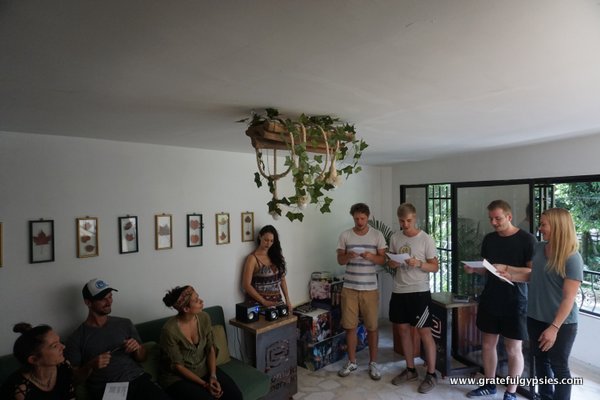 Another thing I loved about Colombia Immersion was the fact that students in the group classes had to do a karaoke-style performance in Spanish one week and then act out a play the next. These kinds of activities make learning a language far more fun and engaging.

At the end of the day, I thoroughly enjoyed my time studying Spanish at both centers. Personally, I would rather live in a place like Laureles or Envigado. Not only are these neighborhoods far more local, but they’re also much quieter. If you’re in the city for a short time and want to party with other travelers, Poblado is the place to be. If you’re like me and you actually have to get up and go to work in the morning and want a more local feel, you’re better off in Laureles or Envigado. Another point goes to Colombia Immersion for their month-long immersion program and their internship opportunities. Those looking to stay semi-long term in the city and take Spanish really seriously will find these to be great options.

In addition to the aforementioned private language schools (and several others), you can also study Spanish in two different universities here – UPB and EAFIT. I can’t speak from experience, but I have heard good things about both schools. If you want to stay here long-term, studying at a university is the only option that might be able to help you get the proper visa, so that’s something to consider. 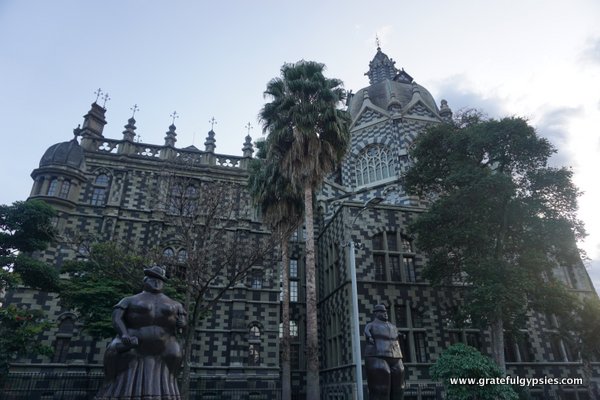 You stole our hearts, Medellín.

They say time flies when you’re having fun, and it sure has flown by these past two months in Colombia. While I enjoyed our time in both Cartagena and Bogotá, there’s just something special about Medellín. The most dangerous thing about the city these days is that you won’t want to leave. We had been warned before arriving, and now we know precisely why. This is an incredible city – one that I could easily see myself moving to on a more long-term basis sooner than later.

My Spanish still isn’t great, but it has improved a lot in a short time. Muchas gracias to all the amazing Paisa people for welcoming us into your city, to my teachers, and to the amazing staff at Colombia Immersion for being so patient with me. If you’re considering studying Spanish here, I’ll leave you with a popular Colombian phrase of encouragement – ¡Hagale pues! (Go ahead!; Do it!).