Después de una semana en Cusco y el Valle Sagrado, viajamos a Arequipa (After one week in Cusco and the Sacred Valley, we traveled to Arequipa). If you missed the last post about our time in Cusco and trip to Machu Picchu, you can go back and check out Parte Dos. In the third and final post, I’ll talk about our bus trip all the way back to Lima with a few interesting stops.

When you spend several months traveling around South America, you’re likely to encounter some ups and downs. After the incredible experience of visiting Machu Picchu, we had one of those travel days full of mala suerte (bad luck). The bus that was on its way to pick us up had broken down, so our departure was delayed by several hours. 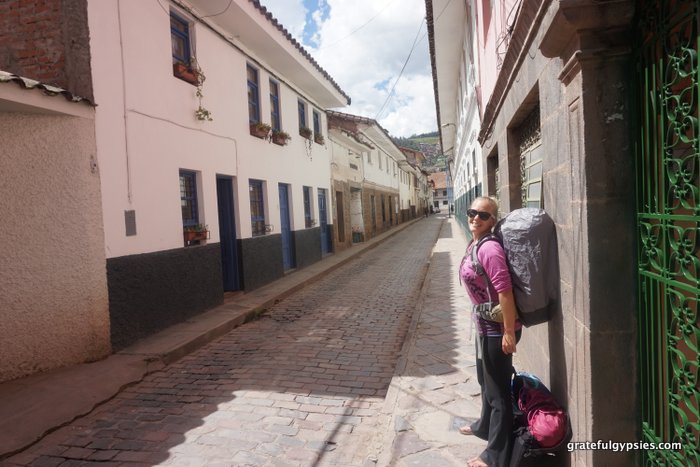 All ready to go before the bus had to break down…

It wasn’t so bad, as we got the news before leaving the hostel and were able to sleep for a few more hours. Our bad luck continued, though. A few hours into the trip, the replacement bus suffered un pinchazo (a flat tire). Of course, we were in el medio de la nada (the middle of nowhere).

While that expression works fine as a literal translation of the English version, a more appropriate Spanish saying is el quinto pino, which basically means we were out in the sticks, boonies, or whatever you call it! You know what they say – “Cuando llueve diluvia” (When it rains, it pours).

At least the bus company handled the issues very well. They offered to buy everyone’s lunch and also offer us all a free boat tour later in the trip. Unfortunately, the breakdowns meant we would miss out on the Nazca Lines.

Las líneas de Nazca son antiguos geoglifos​ que se encuentran en el desierto de Nazca (The Nazca lines are ancient geoglyphs found in the Nazca desert). It’s estimated that they date back to between 500 BC and 500 AD. They depict mostly plants and animals as well as some interesting shapes. No one knows quite how or why they were carved here, making it a very intriguing place to visit. Maybe next time…

After a long day of travel, we finally arrived in Arequipa. Also known as La Ciudad Blanca (the White City), Arequipa es la segunda ciudad más grande del Perú (Arequipa is the second largest city in Peru). If you’re wondering where the nickname comes from, it’s because of all the white buildings in the city that were built from volcanic stone. 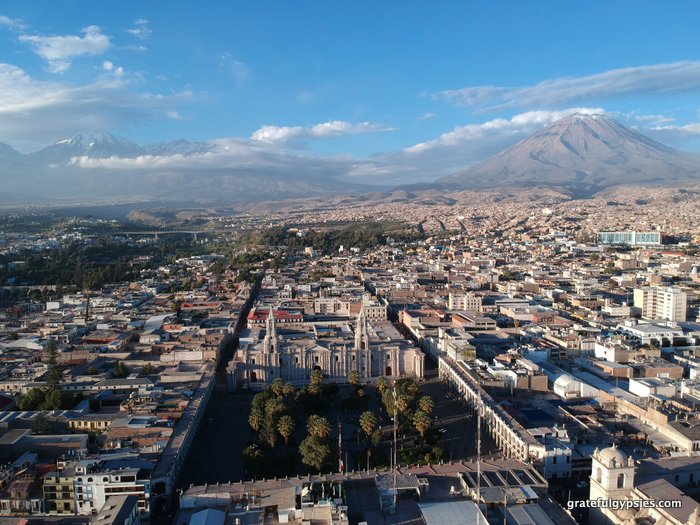 While many travelers come to Arequipa just to head out on a one or two-day trip to Colca Canyon, we decided to just take it easy. After all, it had been a long 7 months traveling across Latin America. Hicimos un recorrido a pie gratuito por la ciudad (We took a free walking tour of the city). 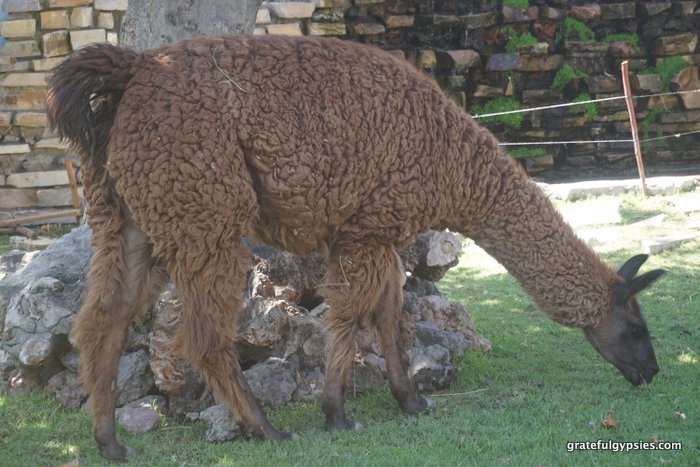 We had an excellent guide and we learned a lot about Arequipa while visiting its most famous landmarks. Oh yeah, and we got to see some alpacas as well! I can’t tell you how many times I made the cheesy dad joke “Alpaca my bags!” over this trip. It just never gets old.

It was still Semana Santa (Holy Week), so there was a lot going on. We had just seen the famous procession in Cusco, but we weren’t aware that we’d also see a complete reenactment of la pasión de Cristo (the Passion of Christ) in Arequipa. 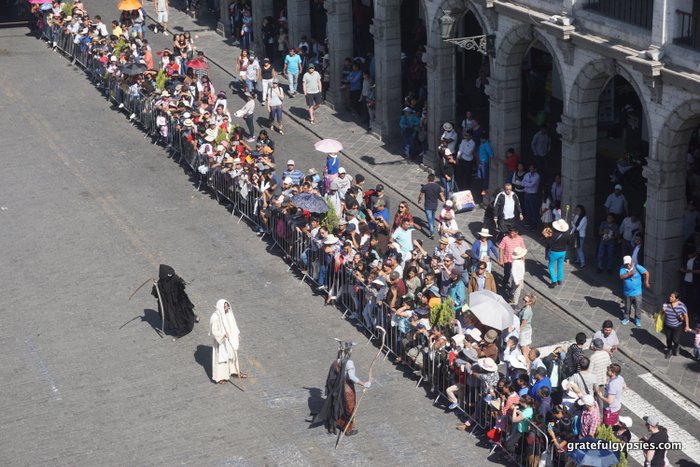 This wasn’t a PG-rated reenactment, either. It was quite graphic, actually. Yet there were still families with small children taking it all in. Needless to say, it was an interesting cultural experience. Our guide even took us up to the rooftop so we could take in the scene from above. If you happen to be in Arequipa on el Viernes Santo (Good Friday), you can expect to see it as well. 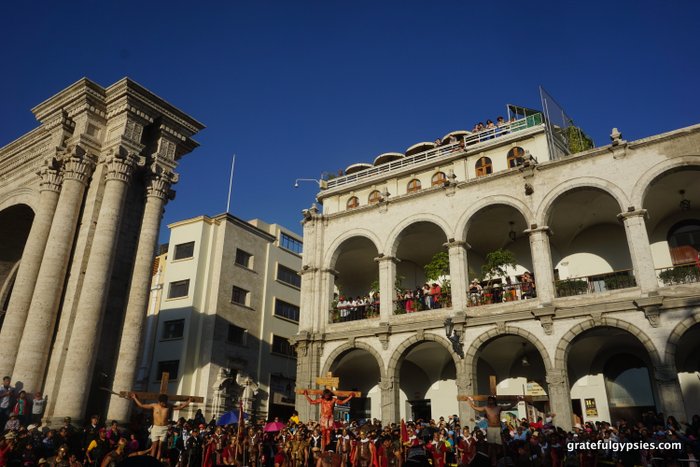 It was pretty graphic…

The next day we returned to la Plaza de Armas (the Main Square) to take in the beautiful architecture the city is famous for. There’s the gorgeous Basílica Catedral as well as la Iglesia de la Compañía. Arequipa realmente es una ciudad hermosa (Arequipa really is a beautiful city). 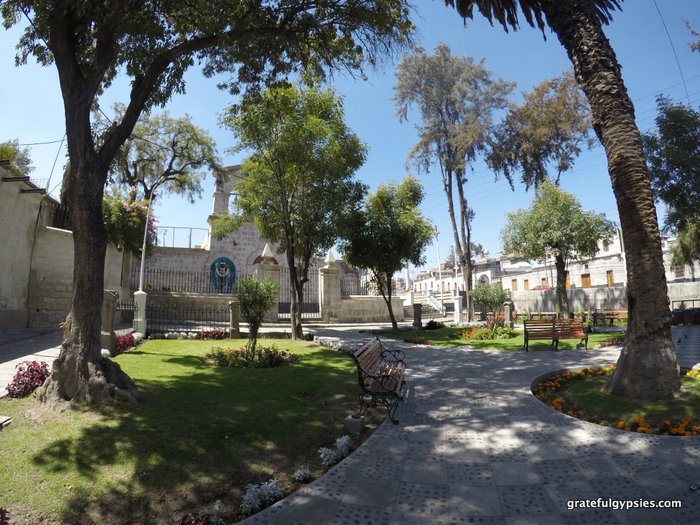 A local park in Arequipa.

Other than that, we didn’t do much in Arequipa. We decided to skip out on the Colca Canyon for a few reasons. Estábamos muy cansados después de un largo viaje (We were very tired after a long trip). Perhaps we’ll check it out next time we visit Peru, but we were just fine with relaxing in Arequipa for a few days.

Después de Arequipa, visitamos Huacachina, un oasis en el desierto (After Arequipa, we visited Huacachina – an oasis in the desert). As with many things in Peru, there is an interesting legend behind how this lagoon came to be in the middle of the desert… 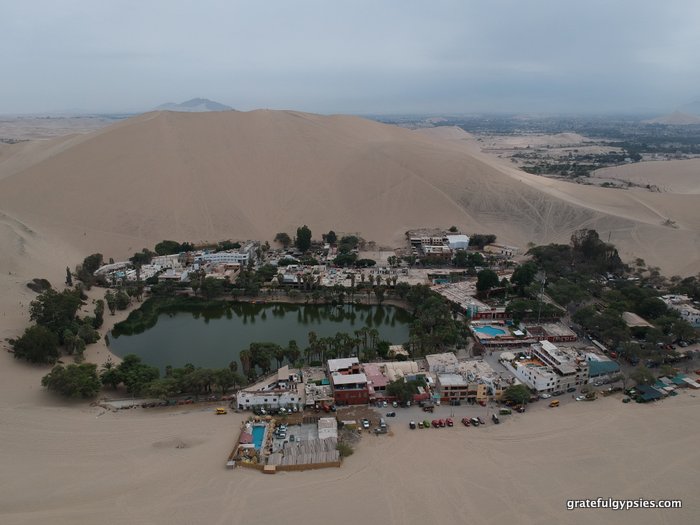 Once upon a time, there was a beautiful princess here. When her handsome prince tragically passed away, she cried so many tears that a lagoon formed. One day she was startled by a hunter and she ran away. The folds of her mantle that she left behind became the sand dunes. According to legend, she eventually became una sirena (a mermaid) and she remains in the waters to this day. 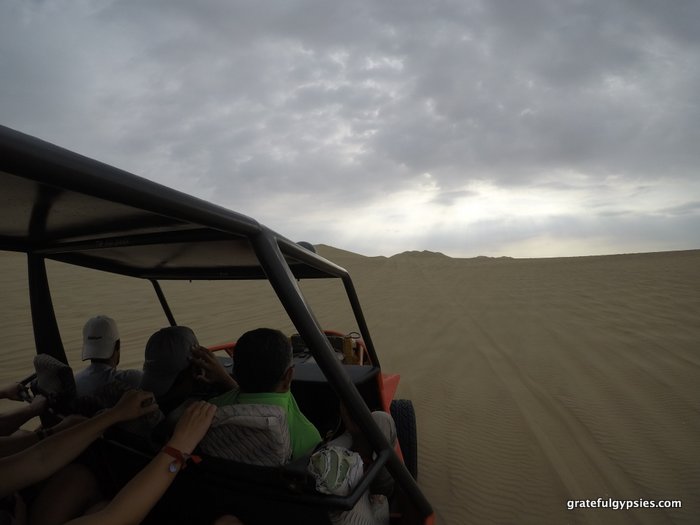 Cruising in the buggy.

Whether you believe the story or not, it’s a fun place to visit! The main activities here are riding in dune buggies known locally as areneros, and going sand boarding down the dunes. ¡Es muy emocionante! (It’s very exciting!). 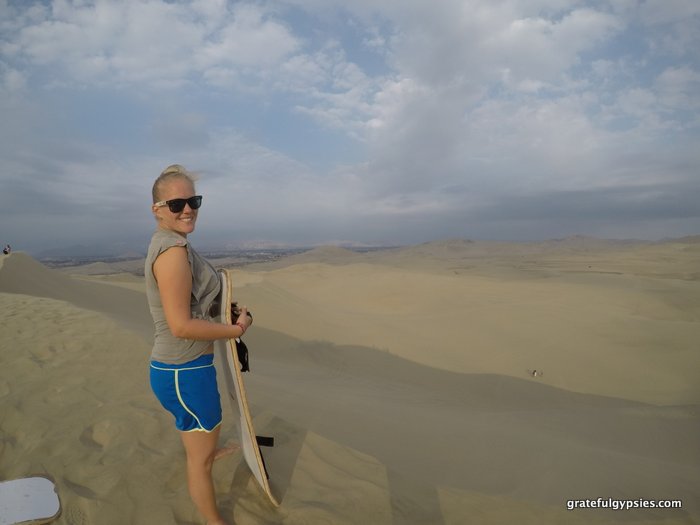 Aunque es un pueblo pequeño, hay muchos hoteles, restaurantes y bares aquí (Although it’s a small village, there are many hotels, restaurants, and bars here). It’s not too far away from Lima, so it’s a popular weekend and holiday destination for Limeños. 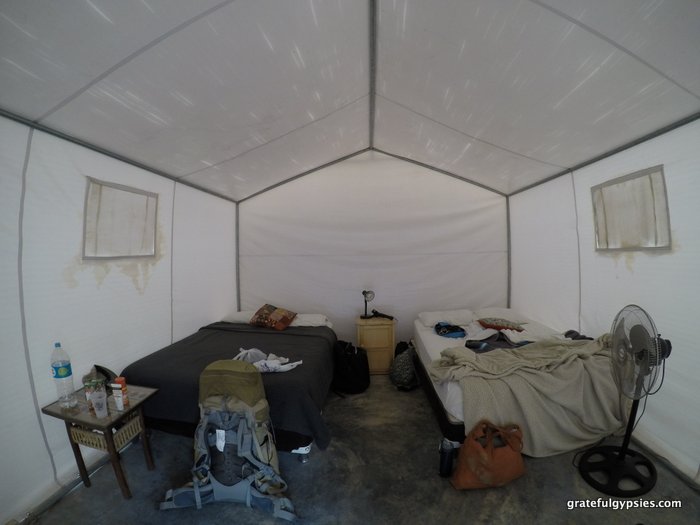 While we mostly stayed in hostels on this trip, we decided to splurge in Huacahina to finally give glamping a try. We just couldn’t resist sleeping in a nice big tent with beds and having a pool with a swim-up bar, in the middle of the desert! 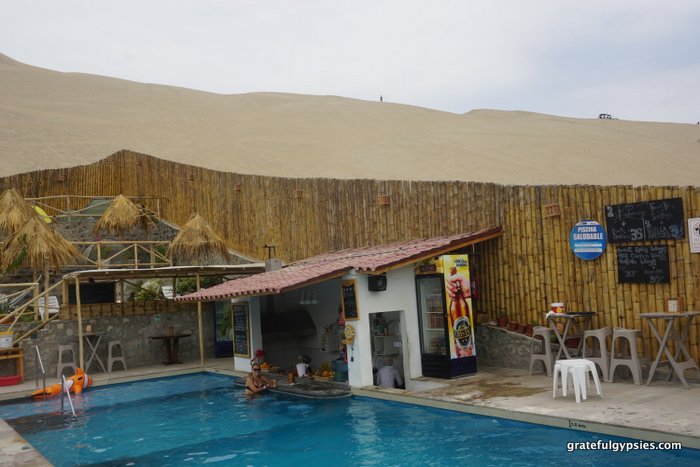 Nuestra última parada fue en Paracas para visitar las Islas Ballestas (Our final stop was Paracas to visit the Ballestas Islands). It’s a small town on the coast where you can easily catch a boat tour out to the islands. 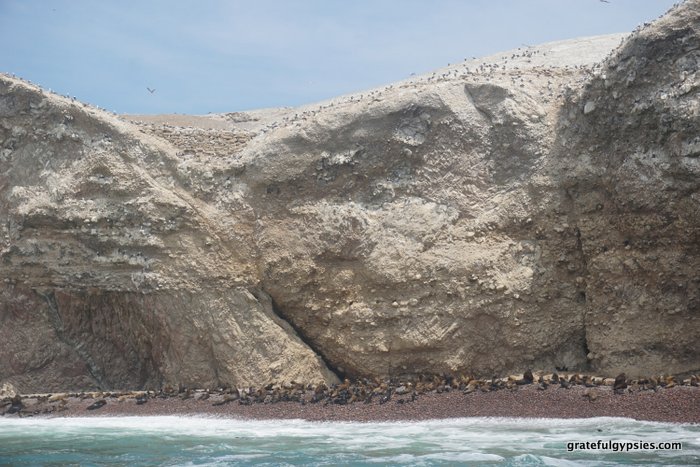 Lots of sea lions hanging out.

Since the Ballestas Islands are home to thousands of species of birds and mammals. Aquí puedes ver leones marinos, pingüinos y piqueros de patas azules (Here you can see sea lions, penguins, and blue-footed boobies). As they’re quite easy and cheap to visit, they are known as the “Poor Man’s Galapagos.” 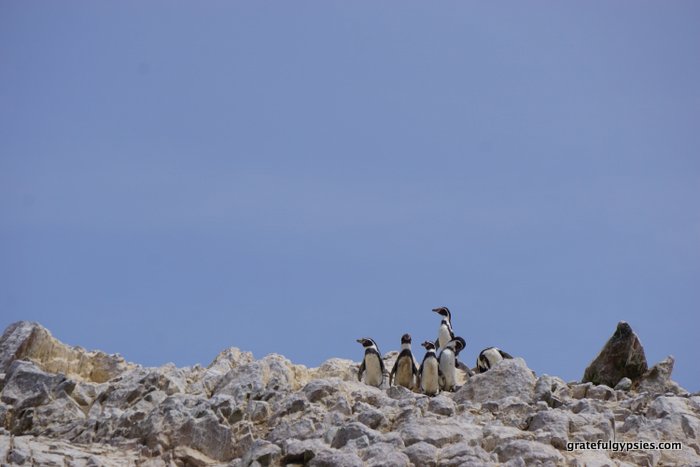 After taking our short boat tour around the islands, we also got to visit the nature reserve. There are some incredible landscapes here and it’s a popular place to try parapente (paragliding). It was a nice place to bring an end to our trip around Peru. 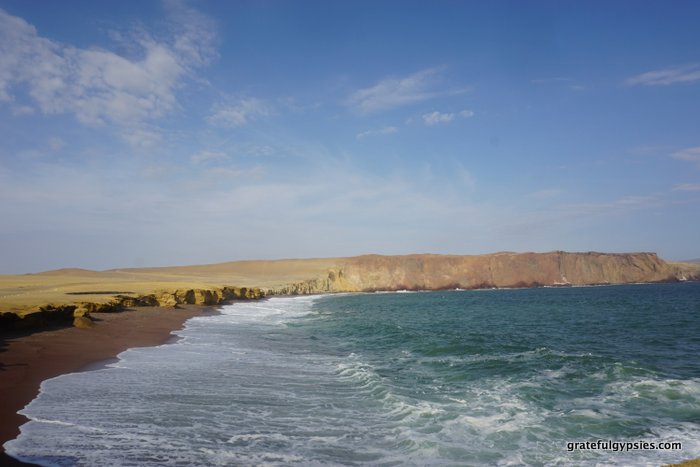 Other than that, there isn’t really much to do in Paracas but sit by the water, eat ceviche, and have a cerveza or two. And that was just fine with us after a very busy trip in Peru! 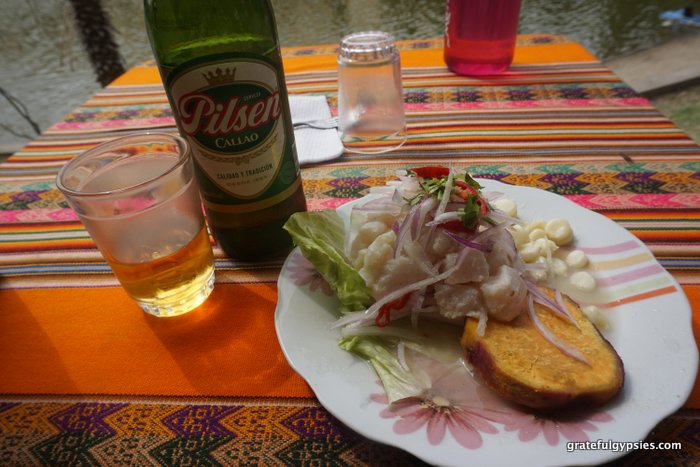 From Paracas, we headed back to la capital for a quick overnight stay before catching a flight out. Although we spent about two months in total exploring Peru, it wasn’t nearly enough time. There’s still so much to see and do there, plus all that delicious Peruvian cuisine and those amazing Pisco Sours. Guess we’ll just have to go back!