A tiny three letter word is causing debates and mixed emotions in Sweden at the moment. The word is “hen” and it’s the new suggested gender neutral pronoun – born from what many people feel is a need for a pronoun free of preconceived notions about gender.
(I should point out that the word itself is not new, but it has mainly been used in bi/homo/transgender circles up until now)

Indefinite pronoun:
Man = one
But “Man” is homonym with the word for man (male person) and can therefore be seen as non-gender neutral.

In today’s Swedish, “han” is used when the gender of a character is unknown and old Swedish writing rules dictate that “he” should be used when the sex is not known or is deemed irrelevant, like in information texts and legal documents for example. Lots of children’s books with animal characters are often assumed to be male and the hen-spokesmen and women are simply questioning this norm of using “han”. This is what Karin Milles, lecturer in Swedish, Södertörn University College, Karin Salmson and Marie Tomicic from OLIKA Publishing Ltd said about the subject in an article in the paper Svenska Dagbladet, translation by The Local:

“‘He’ becomes the norm and anyone who is supposed to be a “she” has to stand out by expressing her feminine attributes. A child who erroneously calls someone “he” is quickly corrected and learns that it is important to make a distinction between “he” and “she”. We argue that this should be of secondary importance and that the active separation of the sexes has negative consequences for both individuals and society.A more relaxed attitude with a less prominent gender indoctrination would lead to a better future. To bring the Swedish word “hen” into common usage is part of that work.”

One part of bringing hen into the Swedish language is by publishing a gender neutral book for children. It’s called “Kivi och monsterhund” (Kivi and monster dog) and is written by Jesper Lundqvist. It’s filled with hens, mappor (Mother = mamma, Father = pappa) morbroster (Uncle = morbror, Aunt = moster)  and bröstrar (Brothers = bröder, Sisters = systrar). The book isn’t even published yet but has received a great deal of attention and press – not only from Sweden – and hen has become a burning issue. Some people greet it with open arms, some think it’s ludicrous and some simply just welcome the debate.

What is your take on hen? Do we need a gender neutral pronoun? Do you have one in your language? 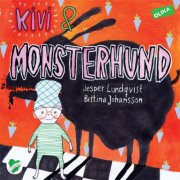 Read more about the book here!