Is There Halloween in Sweden? Posted by Transparent Language on Oct 31, 2008 in Culture

It snowed a little bit today, and it was fun to watch drivers and bike riders genuinely surprised that their cars and bikes were sliding sideways out of control. You’d think that people in a Nordic country would be more used to the fact that white stuff on the roads means slippery surfaces. But no… And what’s up with this macho stuff of not wearing bike helmets? My friend, who’s an ER nurse had a busy day today. Add to that alcohol-laden Halloween parties, and the night shift at the ER will be busy, too. 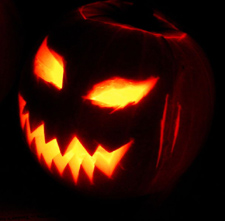 A few clubs downtown and by the university have Halloween costume contests, and I was going to visit one and take pictures for you, but unfortunately, they charge 100 kr cover and wouldn’t listen to my explanations that I could make them famous by posting the photos on this blog. Oh well…

Two kids that showed up at my door demanding candy, but since they were not dressed up in Halloween costumes, I chased them away with my broomstick. If you’re going to ask me for candy, at least have the decency to put on a witch’s hat, or something. Know what I’m saying? Candy is expensive these days, we’re in the midst of a credit crunch, you gotta trick for your treats and not just show up and extend your hand.

Now, some people will tell you that in Sweden, Halloween is celebrated on November 1st, which was supposedly due to a misunderstanding when the retail business organizations introduced the holiday in the mid-90s. Maybe it was so in the beginning. These days most people, and certainly the people who run clubs in our town, know that Halloween är en högtid som firas den 31 oktober.

Last year Svensk Handel decided to stop promoting the holiday, but really, you wouldn’t know it by looking at the stores – maybe they weren’t as full of Halloween items as shops in the US, but if you wanted to decorate your house for a creepy party, you could purchase everything you needed.

I didn’t decorate, and since I’m sitting here typing this, you can tell I didn’t go to any parties, either. I did want to buy a pumpkin to carve, but my dearly beloved said he preferred squash soup. OK, so I bought a squash and we’ll eat the soup tonight. And that’s my Halloween. ☺

OK, I will watch both of “The Grudge” movies – you got me!