Swedish Pokémon Hunters Posted by Tibor on Sep 26, 2016 in Uncategorized 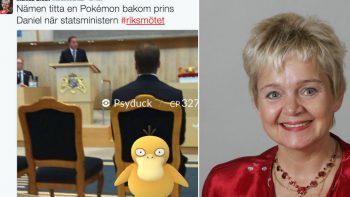 Are you into the new sensation Pokémon-Go? Well in Sweden just as in other countries the number of Pokémon-hunters are huge. The representant of the Social Democrats Monica Green tweeted a picture of a a pokemon she spotted behind Prince Daniel during the PM’s (statsminister) Stefan Löfven’s speech at the opening ceremony of the House of Parliament in Sweden. In a TV-interview late she didn’t quite answered to the question whether she thinks if it was embarrassing (pinsamt) to be caught in the act (tagen på bar gärning), but she kept on talking about something else how good the speech was and how many new reforms they are considering to implement.

In August a minister in nearby Norway found out the hard way that politics and Pokémon are uneasy bedfellows (sängkamrat). Liberal leader Trine Skei Grande came under fire () for playing the game during a hearing on the strategy of the Norwegian military, writes The local.

The story went viral in Sweden and the Nordic Countries on the same day. What is your take on? Was this just a thing of unimportance or did she deserve the media storm that she got? Should lawmakers play Pokemon-Go? She didn’t understand why people got upset about it she explained that multitasking has never been a problem for her.