Having spent a solid week hopping around the islands on both coasts of Thailand, it was time to head back to the capital. Coming from the Andaman Coast, there are plenty of travel options for getting back to Bangkok – flying from Phuket or catching a bus to Surat Thani to get on an overnight sleeper train are both popular – but we opted for the cheap, direct route and boarded a 14-hour bus in Krabi. It wasn’t especially comfortable, but with a few stops scattered throughout the night and a few big bottles of tasty Chang beer, it wasn’t bad at all.

Arriving in Bangkok around 5 a.m., we were dropped off on the legendary Khao Son road, which was a whole lot quieter early in the morning than it was when we last saw it. Of course, there were plenty of shady taxi drivers ready to pounce on unsuspecting tourists getting off the bus, but we managed to elude them and find a guy who willingly turned on his meter. Getting around via taxi and tuk-tuk would prove to be a challenge throughout our stay in Bangkok, as most drivers either refuse to turn on their meter or will only do so if you help them out by stopping off at a tailor or jewelry store, so that they can get free gas from the store owner. While there is a subway system and there are plenty of busses, public transportation in Thailand’s capital is definitely below all other major Asian cities that I’ve been to, including: Beijing, Shanghai, Tokyo, Hong Kong, and Seoul. Thankfully, there are an abundance of motor-bike taxis, and they are reliable and cheap. Unfortunately, they’re not everywhere, and whenever you find them near a major tourist attraction, their rate skyrockets. Basically, unless you don’t mind getting ripped off, plan to do a lot of walking in Bangkok. 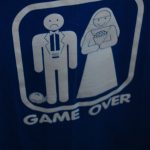 Exhausted from our long trip, the first order of business was a nap in a proper bed. In the afternoon, our friend accompanied us on a trip to the Chatuchak Weekend Market (จตุจักร), the largest market in all of Thailand. It is estimated that over 200,000 visitors frequent this market every day, and based on the crowds we saw I would say that is a fair guess. Strolling up the many different sois (alleyways), we saw just about everything one could ever want from a market – clothing, handicrafts, antiques, furniture, artwork, and even pets. 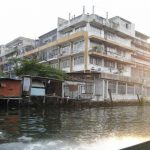 Passing by local residences on the river.

Later on that evening, we headed out on a river boat cruise to take in the sights. A far contrast from the skyscrapers and luxury hotels, we saw how regular, everyday Thai people live, as we passed by row after row of tiny riverfront shacks. While you may think that the locals would look on tour boats passing by with angry scowls, almost everyone smiled and waved at us. The friendly and pleasant demeanour of Thai people we encountered during our month long stay was definitely one of the highlights of our trip, and oftentimes I felt like we were being treated more like new friends than tourists. 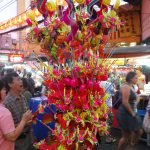 Getting ready for Chinese New Year.

Once we got off the boat, we headed for Chinatown to see how Thailand’s capital city was gearing up for Chinese New Year. 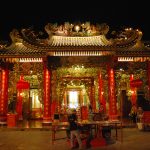 Illuminated in neon lights, this strip of Bangkok looks as if it were indeed transplanted from Beijing. With crowded streets full of vendors selling a variety of New Year decorations and fireworks, it was clear that there was going to be a big celebration for the big holiday. As my friend told us, living in Thailand is great for many reasons, one of which is that you can celebrate New Years three times: on December 31, again for Chinese New Year, and finally for the Thai festival of Songkran (สงกรานต์). Get your champagne fix in for the Western version, blow some stuff up and watch dragon dances for China’s, and then throw water at each other to cool off before you head to a Buddhist temple to ring in the new year the Thai way. 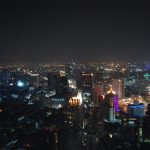 View from the Moon Bar at Vertigo. 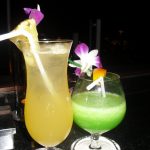 Delicious drinks on the roof.

To cap off a great day in Bangkok, we paid a visit to the Banyan Tree Hotel, whose 61st floor Vertigo restaurant and Moon Bar provides a stunning panoramic view of the city. Take note from our mistake and make sure you dress properly – showing up in cargo shorts, I had to borrow a pair of slacks from the restaurant to be allowed in. Although the food looked and smelled amazing, we were on too tight of a budget to indulge in a full dinner (there’s always next time), so we settled for a couple of fruity, yet potent cocktails. With a big day ahead of us, we called it an early night and caught the subway back to our friend’s apartment.