Chiang Mai – The City Posted by sasha on Jun 27, 2011 in Travel, Uncategorized 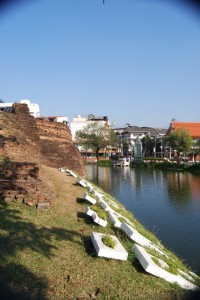 After an amazing day trip to Ayutthaya, we headed back to the capital to catch an overnight train bound for Chiang Mai (เชียงใหม่), the capital city of the province after which it is named. Rich with history and culture, this city is located on the Ping River (แม่ น้ำปิง), a major tributary of the Chao Phraya River. Founded by King Mangrai in 1296, Chiang Mai means “New City”, and it was once the capital of the Kindgom of Lanna (อาณาจักรล้านนา). When it was established, the city was fortified by a moat and a defensive wall, as the Burmese were a constant threat. These days, Chiang Mai is known as the Northern capital of Thailand, and is second in importance only to Bangkok. 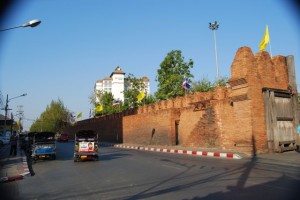 Accustomed to the very punctual Chinese trains, we sprinted through the station in Bangkok, afraid of missing the train. Upon our arrival, the workers on the train simply chuckled at us, as sweat dripped from our brows and we gasped for breath. Apparently even in Bangkok, everybody operates on island time, as the train departed a good 30 minutes after its scheduled time. After our first Thai train ride from Bangkok to Chumphon – where we had seats for the overnight journey – our lower bunk sleepers were a very welcome comfort after a few weeks of traveling. Exhausted from a crazy weekend in Bangkok and a big day of sightseeing in the ancient capital, we had no trouble sleeping through the night.

The next afternoon, our train finally arrived in Chiang Mai – a good three hours late. Despite our tardiness, somebody from our guesthouse was still waiting for us. We checked into our room, dropped off our bags, and set off to explore the city on foot. With over 300 Buddhist temples scattered throughout the city, we decided to go and check out a few in the city center.

For our first temple, we dropped by Wat Phan Tao (วัดพันเตา), which was just a short walk from our guesthouse. The name, meaning “Monastery of a Thousand Kilns”, is thought to refer to the casting of the many Buddha images for this temple’s bigger neighbor, which we’ll get to in a minute. It is said that the temple was constructed as a royal palace for the former ruler of Chiang Mai, Chao Mahawong, who used the structure from 1846 to 1854. 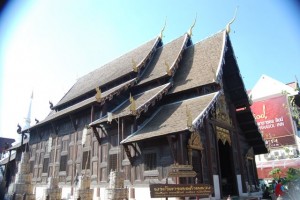 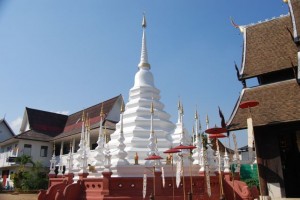 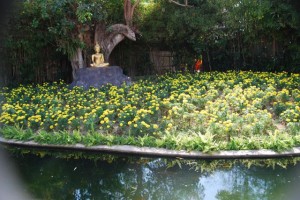 We then headed to Wat Chedi Luang (วัดเจดีย์หลวง), or the “Temple of the Big Stupa” was first constructed in 1391 by King Saen Muang Ma to hold the ashes of his father. Other kings worked on the temple until it reached its final form in 1475. The famous and holy Emerald Buddha (currently held in Wat Phra Kaew in Bangkok) was once here. Although the main chedi was destroyed hundreds of years ago and never properly repaired, this wat is still an active place of worship amongst local monks. 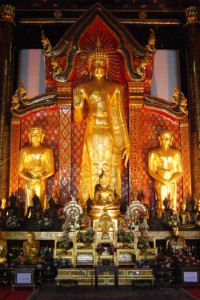 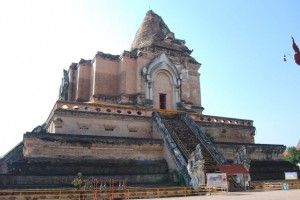 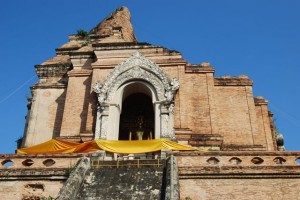 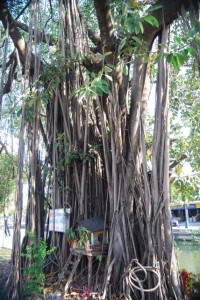 After relaxing for a little while and enjoying a delicious dinner, we ventured out to the Night Bazaar (ไนท์บาซาร์), where hundreds of local vendors set up shop to sell a variety of goods. Beginning around 6 PM and lasting until around 11, this night market has just about anything you could want, including: clothing, handicrafts, paintings, jewelry, antiques, and of course a bunch of knick-knacks and silly stuff. If you pay a visit to the Night Bazaar, just make sure to be patient and bargain hard – you can always cut a deal. 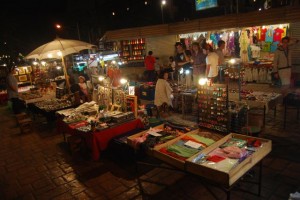 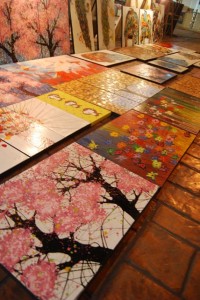 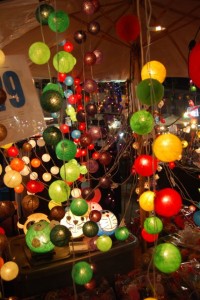 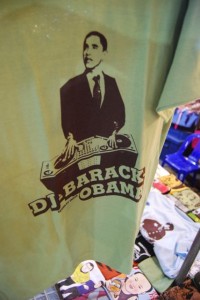 While exploring Chiang Mai city was a great deal of fun, there were too many exciting outdoor activities to choose from for us to stay within the city walls. As such, we headed back to our guesthouse to rest up for our 3-day, 2-night jungle trek tour.