Yesterday (October 23rd) was a national holiday in Thailand. This day commemorates Chulalongkorn, the fifth monarch of Siam from the House of Chakri. Also known as Rama V and considered one of the country’s greatest kings, he passed away on this day in 1910. 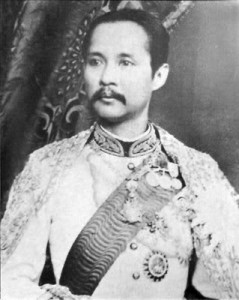 Although he was just 57 at the time of his death, he had already ruled over Siam for 42 years, as he took the throne when he was a mere 15 years old. Chulalongkorn is the grandfather of the current king of Thailand, Bhumibol Adulyadej. During his time as king, he was known amongst Siamese people as Phra Phuttha Chao Luang (พระพุทธเจ้าหลวง – prá-pút-tá-jâo lŭang), which can be translated as the “Royal Buddha.” Many Westerners may already be familiar with the king as well, who is the inspiration for the boy prince in the famous musical “The King and I.”

An introductory video into the holiday, the king, and modern day celebrations.

At the time of his reign, European colonization was dominating Southeast Asia – French Indochina, the Dutch East Indies, the British in Burma and India, and Portugal in Timor and Malacca. Although some parts of Siam were ceded to France and Great Britain, Rama V managed to stave off European colonization. As such, Thailand is the only SE Asian nation that was never a European colony. He managed to do this by traveling frequently to Western nations, where he learned of new innovations that he brought back to modernize his country. The first railway was built, communications were improved thanks to a postal service and use of the telegraph, and the government was modernized with power being stripped from local rulers and instead centralized in Bangkok. He helped to create the Thai nation as well, bringing the Thai language to corners of the country that previously spoke different languages. In addition, slavery was finally banned – a huge change considering that 1/3 of the population were slaves before his reign. Chulalongkorn was also a man of the people – he would often disguise himself in plain clothes and immerse himself in the crowd to get to know his subjects, their thoughts, and their hopes for the country. Thanks to the vast improvements that were made under his time, his ability to prevent European colonization, and his great reputation as a man of the people, he’s also known in Thailand as Phra Piya Maharat (พระปิยมหาราช prá bpì-yá-má-hăa-râat) – the “Great Beloved King.” 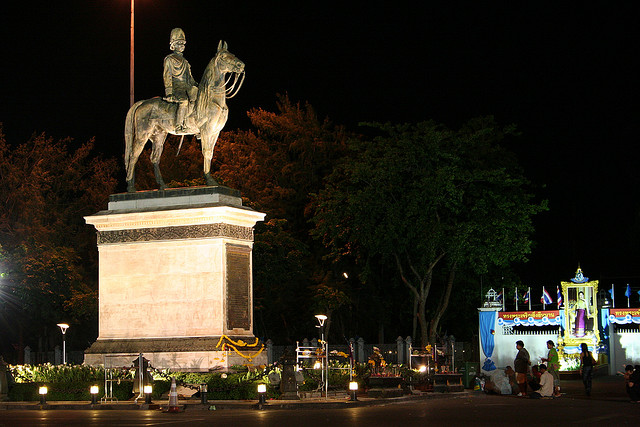 Image from Keng Susumpow on www.flickr.com

The holiday is also known in Thai as Wan Piyamaharaj (วันปิยมหาราช – wan bpì-yá-má-hăa-râat), and it’s a short one-day affair. Government buildings, banks, offices, and schools will have a day off, but many people go about business as usual. Thai people all around the country pay their respect to Rama V by visiting a memorial to him and taking part in a ceremony. Many people gather in the Royal Plaza of Bangkok, a public square located in front of Dusit Palace where the beloved king once lived. Even though he’s been gone for over 100 years now, Rama V obviously still holds an important place in the hearts and minds of Thai people. You can view some photos from the celebrations in Bangkok yesterday here.