Trekking Through the Thai Jungle – Part Two Posted by sasha on Jul 27, 2011 in Travel, Uncategorized

After our night in a tiny village, we headed back out on our hike through the beautiful Thai jungle in Chiang Mai. Throughout the morning, our incredible tour guide Book continued to regale us with tales of his life, mixed in with plenty of jokes and useful tidbits of information about the jungle and everything in it. After a few hours of walking, we stopped at yet another scenic waterfall to enjoy our picnic lunch. Further on down the trail, we stopped in another village, inhabited by people of the Karen hill tribe. The women of the village were at work stitching and weaving colorful scarves (which were, of course, available for purchsae), and cattle, hogs, and chickens were wandering around the village, or laying down and relaxing. Book told us the story of the Karen tribe, and how they came to Thailand and eventually became Thai citizens. However, the language that they speak is quite different from standard Thai, and Book told us he could not understand their dialect, but that they could speak good enough Thai to communicate with him. 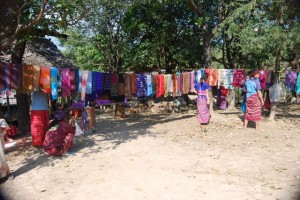 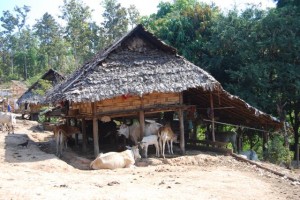 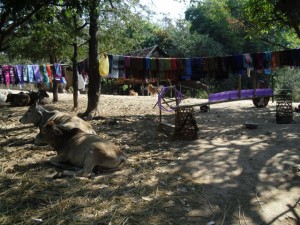 Village life in the Thai countryside. 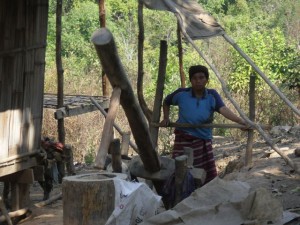 A normal day of work in the Karen village.

After a short stay in the Karen village, we got back on the trail and kept the hike going. We walked for a few hours until we came to a little waterfall and swimming hole. As it was a pretty hot day and we had been hiking for a good five hours, we were thrilled to have a chance to jump in the water and cool off. The water was icy cold, and it was just what we needed to break up the long day of hiking in the heat. 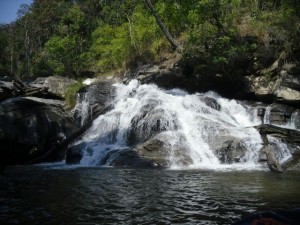 Relaxing by a waterfall. 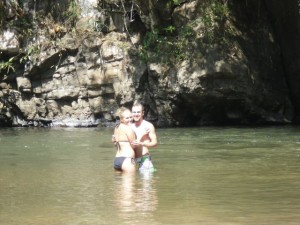 Cooling off in the swimming hole.

Nice and refreshed after our swim, we hit the trail again, bound for another village where we’d be staying the night. We arrived late in the afternoon, with plenty of time to enjoy the peace and quiet of the countryside before the sunset. We sat outside and swapped travel stories while the locals picked papayas off of tall trees. 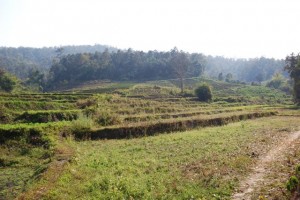 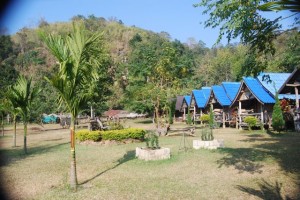 When the sun went down, Book again went to work cooking up a feast for us. Just as the night before, everything he made was delicious. After dinner, we lit another campfire and sat around with a bottle of Thai whiskey. With a few shots in him, Book opened up to us quite a bit, and he told us stories of his past. Once upon a time, he told us, he worked with opium farmers by selling it to tourists that he took on treks. He told us how he also had a bad opium habbit, and how he finally came around and got clean. These days, he sticks to the whiskey and hand-rolled cigarettes, and his top priority is being a good husband and tour guide. Having just shared his life story, Book was ready to take the guys in the group out on an adventure. As such, me and the other guys joined him and two of his friends on a quest to hunt flying squirrels. Equipped with old school muskets, the guys actually shot down quite a few of the elusive squirrels, which they would take home to feed their families. It was another amazing night out in the Thai jungle, and we again packed into a hut, huddled underneath mosquito nets, and drifted off to sleep.

For our last day in the jungle, we started out with a short hike to catch a ride… on elephants. With three people per elephant, I was volunteered to sit up front on Dumbo’s neck. This made for an interesting ride, especially when it tried to venture off into the trees in search of food. Thankfully, there was a guy guiding the elephant from behind to ensure that we did not wander off into the trees. 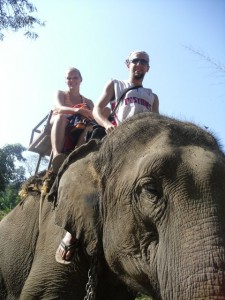 When we arrived at our destination, we hopped off the elephants and walked onward to another waterfall. This time, cliff jumping was an option, with two different jumps – a little high and really high. Book wasted no time in leaping off of the smaller one, and I had no trouble following. The higher jump, however, was a different story. Having taken the plunge several times before, Book casually leaped off of the rock and into the water. Looking down at the jagged rocks directly below, I had a little bit of trouble taking the leap. I eventually came around, and while the jump was exhilarating and tons of fun, an awkward landing ensured that my ears would be full of water for the next two weeks (thankfully over the counter antibiotics and pain killers were available back in the city). We finished up our three-day adventure with a trip down a little river on bamboo rafts. It had been an amazing experience, to say the very least, and it was easily the highlight of our month long stay in Thailand. Back in Chiang Mai city, we bid farewell to our new friends and headed out to roam the streets. 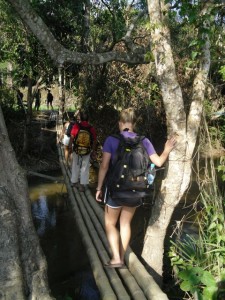 Making our way out of the jungle on Day #3. 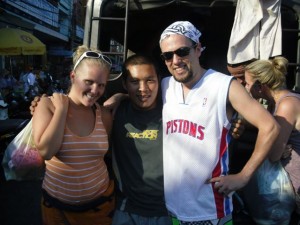 Us with Book - the best tour guide there is.