Trekking Through the Thai Jungle – Part One Posted by sasha on Jul 23, 2011 in Travel

After a day of bouncing around the city of Chiang Mai, we signed up for a 3-day, 2-night jungle trek with a small group. Our leader for the trek introduced himself to us with his English name – “Book… like the Jungle Book.” He was all smiles and full of jokes, and from the very beginning, we knew we were in for an exciting adventure. Running down the itinerary for the trek, Book schooled us on what to bring and what to leave behind, and he introduced the various activities we would be doing on the trip. That night, we made sure to get some good rest, as there was an early wake up call the next day.

First up for our three day trek, we visited a hilltop temple, which featured beautiful Buddha carvings in the rocks, a variety of interesting statues, and a massive sitting Buddha on the top of the hill. Not only that, but we were treated to stunning views of the Thai countryside. 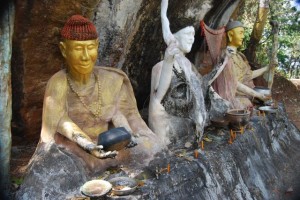 Buddha statues on the hill. 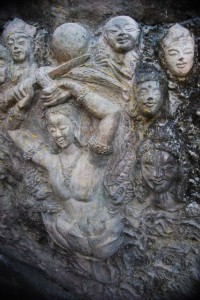 Intricate carvings in the side of the rock. 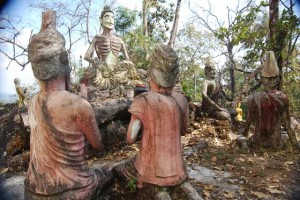 A starving Buddha statue, and some of his followers. 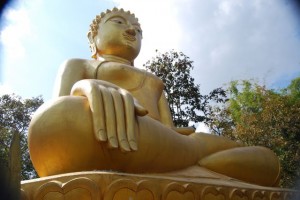 The huge Buddha atop the hill. 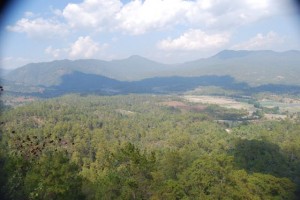 A lovely view of the countryside. 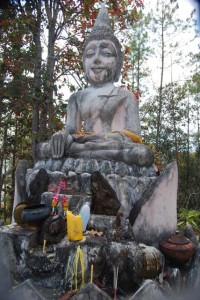 Another statue guarding the entrance to the hill.

Back in the van, we drove for a few minutes before we were dropped off at the start of the trail. We bid farewell to our driver, and head out on foot to begin our epic hike. An hour or so into it, we stopped to enjoy a peaceful and tranquil waterfall. While relaxing by the waterfall was nice, we went out in search of some more excitement, which we found by scaling the jagged rocks on the side of the falls. 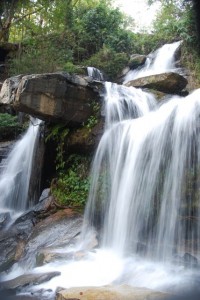 Relaxing by a rushing waterfall. 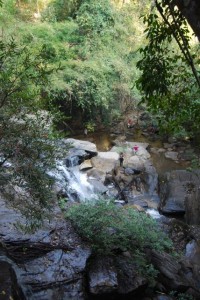 The view from the top.

We kept on walking, stopping now and then to get a lesson from Book on jungle survival. For example, he told us about a particular root that grew out in the jungle. No matter how hard you try to keep it down, this root springs back up. Due to the root’s strength and refusal to go down, Book told us that Thai men would often eat it as a sort of “male enhancement” for strength and virility. Throughout the trek, Book was full of interesting factoids, as well as plenty of hilarious jokes and shenanigans. His great sense of humor made the trip that much better, and he will go down as the greatest tour guide I’ve ever had without a doubt.

As the sun went down, we approached a tiny jungle village where we would be spending the night. Book and a few of the locals went to work cooking up a big vegetable stew with rice, while us visitors relaxed our tired feet and enjoyed some cold Chang beer. We enjoyed a big group dinner, sharing stories and jokes, and then we lit up a campfire to warm things up a bit. A bottle of Thai whiskey and an acoustic guitar got passed around, and we spent the night singing and drinking under the stars. As for our accommodations, we all slept together on a straw mat in one of the huts, under the protection of a massive mosquito net. 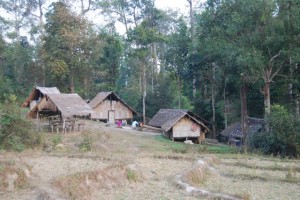 The entire village fit into the frame. 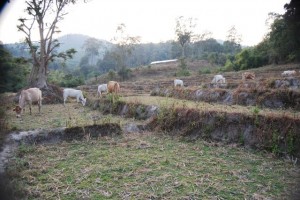 Cows grazing out in the field. 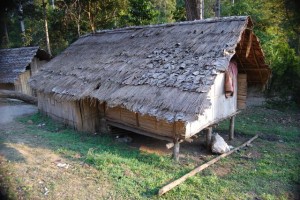 Our accommodations for the night. 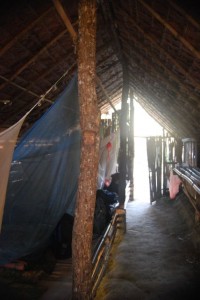 We fit 10 people on this straw bed.

The best to-go lunch ever!

The next morning, Book handed bananas and coffee for breakfast, as well as some nifty to-go lunches, which consisted of noodles wrapped in leaves – portable and delicious! Our hosts had been gracious and hospitable, a pleasant trend that woudl repeat itself everywhere we went on our Thailand trip. We headed out on foot again, ready to explore the jungle and enjoy a few more days with nature.