The Royal Ploughing Ceremony Posted by sasha on May 9, 2016 in Culture, History, Travel

Today is a national holiday in Thailand – the Royal Ploughing Ceremony. The official name for the ceremony is quite long:

It literally means “the royal ploughing ceremony marking the auspicious beginning of the rice growing season.” Since that’s such a mouth-full, most people just refer to it by its shortened name:

Let’s learn more about this traditional and important Thai ceremony, starting with a bit of history. 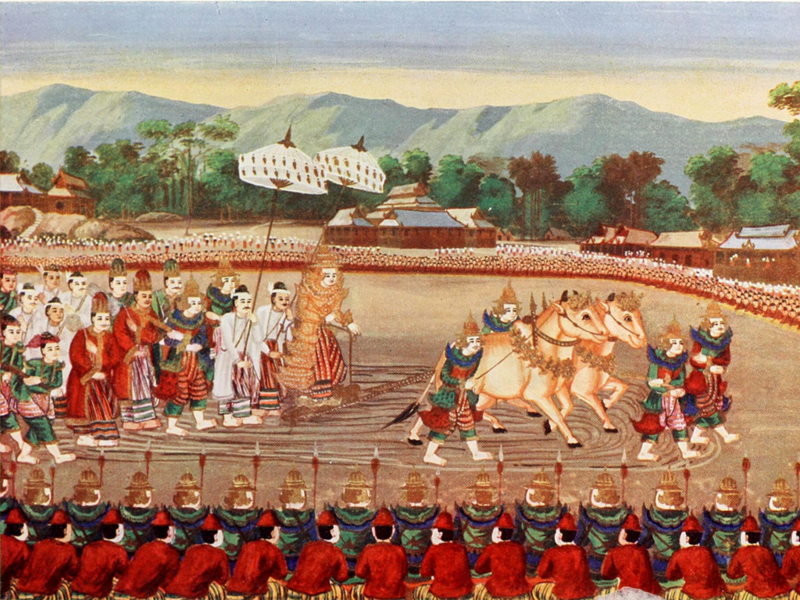 A painting depicts the ceremony in Myanmar.
By Saya Chone (Mandalay and Other Cities of the Past in Burma) [Public domain], via Wikimedia Commons

This ancient ceremony goes back hundreds of years to the Sukhothai Kingdom. King Rama VII discontinued the practice in the 1920s, but the current monarch (King Bhumibol Adulyadej or Rama IX) revived it in 1960. This ceremony marks the beginning of the rice-growing season, an important time in Thailand as half of the population depends on faming for a living. Due to his old age and deteriorating health, the King has not been presiding over the ceremony in recent years. His son – Crown Prince Maha Vajiralongkorn – has been overseeing the traditional ceremony that is meant to bring an auspicious beginning to the new planting season.

Time and Location of the Ceremony 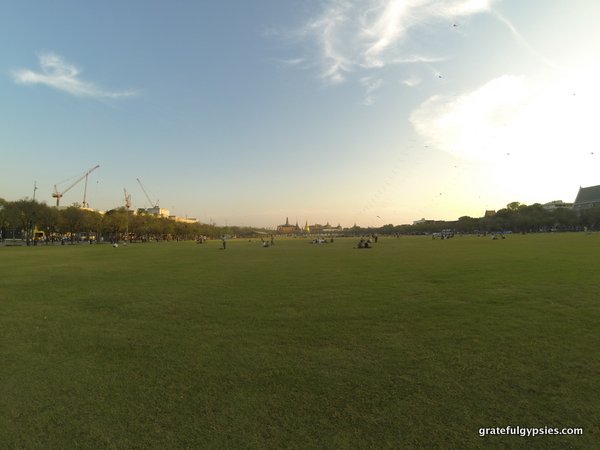 Sanam Luang – site of the ceremony.

The exact date and time of the ceremony is determined by Brahman priests and astrologers. It usually falls somewhere in mid-May, and it falls on the 9th this year. The ceremony takes place at Sanam Luang (สนามหลวง sà-năam lŭang), an open field and public square across from Wat Phra Kaew and the Royal Palace.

The Details of the Ceremony

The King appoints a Ploughing Lord (พระยาแรกนา prá yaa râek naa) to lead the ceremony. For the past few years, it has been the Secretary for Agriculture and Cooperatives. At the beginning of the ceremony, he chooses one of three cloths from a covered tray. If he chooses the longest cloth, there will be little rain in the coming year. The shortest cloth signifies abundant rain, while the medium-length one calls for average rainfall. After this, he will plough three furrows with the assistance of sacred white oxen (พระโคผู้สีขาว prá koh pôo sĕe kăao). Four consecrated ladies (เทพี tay pee) follow with gold and silver baskets filled with rice seeds that were grown at the Royal Palace. These seeds are thrown into the furrows, while Brahmans alongside them chant and blow conch shells (สังข์ săng). Next, the oxen are offered seven bowls containing grass, paddy, maize, sesame seeds, soy bean, water and liquor. What they choose to eat or drink is used to make predictions for the following year. After the ceremony, people rush in to try and collect the seeds, as they are regarded as auspicious and will bring good luck. Farmers will mix these in with their own seeds to ensure a good harvest in the coming year.

If you’re interested in seeing what this ceremony looks like, you don’t even have to travel to Thailand! Check out this full video of the ceremony from 2014, complete with English commentary: