Temple Etiquette in Thailand Posted by sasha on Aug 12, 2011 in Culture, History, Travel

Nearly 95% of Thailand’s population are Buddhist, and the country is full of sacred Buddhist temples, or wats (วัด). When visiting these temples as a tourist, it is important to observe proper etiquette so as not to offend Thai people. Basically, you don’t want to be that ignorant, disrespectful foreign tourist that everybody hates. While Thai people are quite forgiving, and will probably not show it if you offend them, it’s best if you go into your temple visits with some background knowledge about what is and is not proper behavior.

When visiting a holy site in Thailand, such as Wat Phra Kaew in Bangkok, or Doi Sutthep in Chiang Mai, Rule #1 is dress properly. For women, this means wearing skirts or pants that cover the knees, and a top that covers the shoulders and is not transparent. Alternatively, ladies can also don a scarf for a temple visit. For men, long pants and a shirt that covers the shoulders are necessary. I was unaware of this dress code when I visited Wat Phra Kaew, and as a result I had to buy a snazzy pair of elephant pajama pants in order to enter the temple. Leave your Full Moon Party glow-in-the-dark tank top, board shorts, and flip flops at home if you’re planning a visit to a major Buddhist temple. 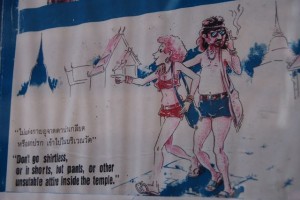 Speaking of footwear, don’t forget to take your shoes off before entering a temple. Of course, it is just fine to wear your shoes when walking around outside, but once you enter a temple that contains a sacred Buddha image, it is a serious sign of disrespect to enter with your shoes on. Thais believe the feet are the dirtiest part of the body, and it actually makes sense, but to them the feet are also spiritually unclean. Another thing about feet that is important to know is that you are not supposed to point your feet at a holy statue or relic. Watch Thai people in a temple and sit like they do – with your feet tucked under you and pointed backwards. Also do NOT, under any circumstance, touch somebody’s head. While a pat on the head may seem like something silly and innocent to most Westerners, this is another sign of disrespect. As Thai’s regard the head as the closest part of the body to Heaven, it is not appropriate to touch someone on the head, no matter what. 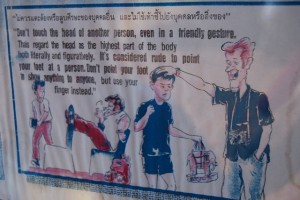 No kicking your feet up and patting heads in a Thai temple.

With so many temples, there are tons of sacred Buddha statues around. Don’t be an oblivious farang (ฝรั่ง – Thai general term for Westerner) and climb on any statues or show any signs of disrespect to a statue. This means no posing for silly pictures with a Buddha statue, and no taking any picutres of the most sacred images, such as the Emerald Buddha. 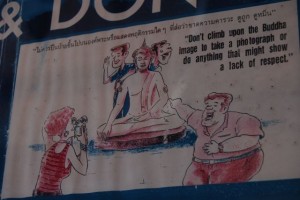 "Hey! Take a picture of me with this Budda!" Stupid farang...

While visiting a Thai temple, there is a good chance you will see plenty of monks. Women are not allowed to touch a monk, and they are also not allowed to hand something to a monk directly. If a monk even so much as brushes up against a woman, he will have to spend an entire day or more physically and spiritually cleansing themselves as well as fasting. Also, it is looked down upon to take pictures of monks. They are not zoo animals, so don’t treat them as such.

Finally in the “do-not” list is PDA. That’s right, Public Displays of Affection. Even though you may have hit it off with that girl you met on Koh Phi-Phi, save the making out and groping for Khao San Road, and leave it out of the temples. Such behavior is looked down upon in Thai society, and will assure you plenty of condescending stares should you act as such. 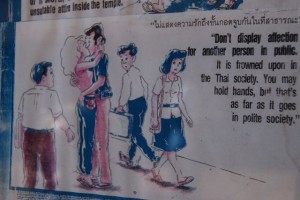 Get a room, not a temple. 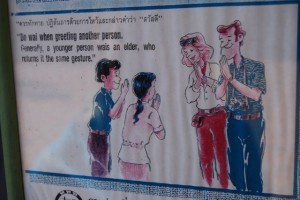 Show respect, and Thai people will love you for it. 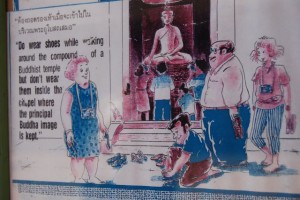 Leave those stinky shoes outside, please. 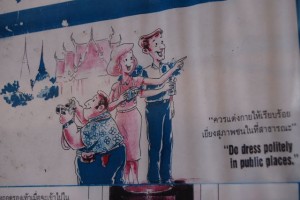 Save your tank tops for the islands, folks. 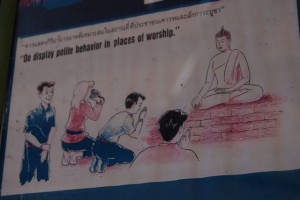 Respect the sacred statues and relics.

Aside from the obvious things we’ve talked about that are seen in the pictures above, you should also donate money. Many temples in Thailand are free to visit, but they are only able to be maintained through visitors’ donations. Chances are you’ll be spending plenty of money on hotels, food, and fun, so why not toss in a few extra Baht to help preserve these magnificent cultural relics? Also, it’s a good idea to bring some food. Most monks stay fed by generous donations from normal people like you and me, so bring a nice plate of food with you when visiting a temple. Just remember that you may only give them food that has been prepared specifically for them; don’t go in there with half of a bowl of pad Thai that you couldn’t finish.

Well, there you have it folks. Now you’re ready to get out there and experience the amazing Buddhist temples of Thailand, without looking like a stupid foreigner while doing so!