Dressing Up in Style Posted by Rachael on May 13, 2018 in Uncategorized

This week, we’ll talk a bit about traditional Pakistani and Indian dress. Although many people nowadays, especially men, wear Western business and casual attire, such as t-shirts, jeans, button-down shirts and slacks, people still wear traditional clothing from time to time (especially on special occasions like weddings). Traditional clothing is especially common amongst rural people, although you will still find t-shirts and jeans in some remote areas as well. It’s important to appreciate traditional dress because it reflects centuries of culture and history and is thus particularly well-suited to the climate of different regions of South Asia. You will quickly find this out when you compare the uncomfortable and hot feeling you get from wearing jeans in the Lucknavi summer to the airy and buoyant sensation that comes from wearing a loose-fitting, cotton shalwar.

The first garment for men that I’ll talk about is the Pakistani waistcoat or vest (ویسٹ کوٹ), which men usually don on formal occasions and in professional settings. This Western piece of attire that was adopted by Indians and Pakistanis alike is no doubt descended from the British colonial era. Another outer garment is the اچکن/achkan, which is a jacket that typically falls to the knees and is also worn on special occasions. A similar garment to the اچکن/achkan is the شیروانی/sherwani, which is a lengthy, outer garment that is usually worn over a کرتا/kurta (or long tunic) and a lower garment such as چوڑیدار/churidar, دھوتی/dhoti, پاجامہ/pajama or شلوار/shalwar (we’ll get into these later). It is different from the اچکن/achkan in that it is usually shorter in length, made from heavier fabrics and has a lining. 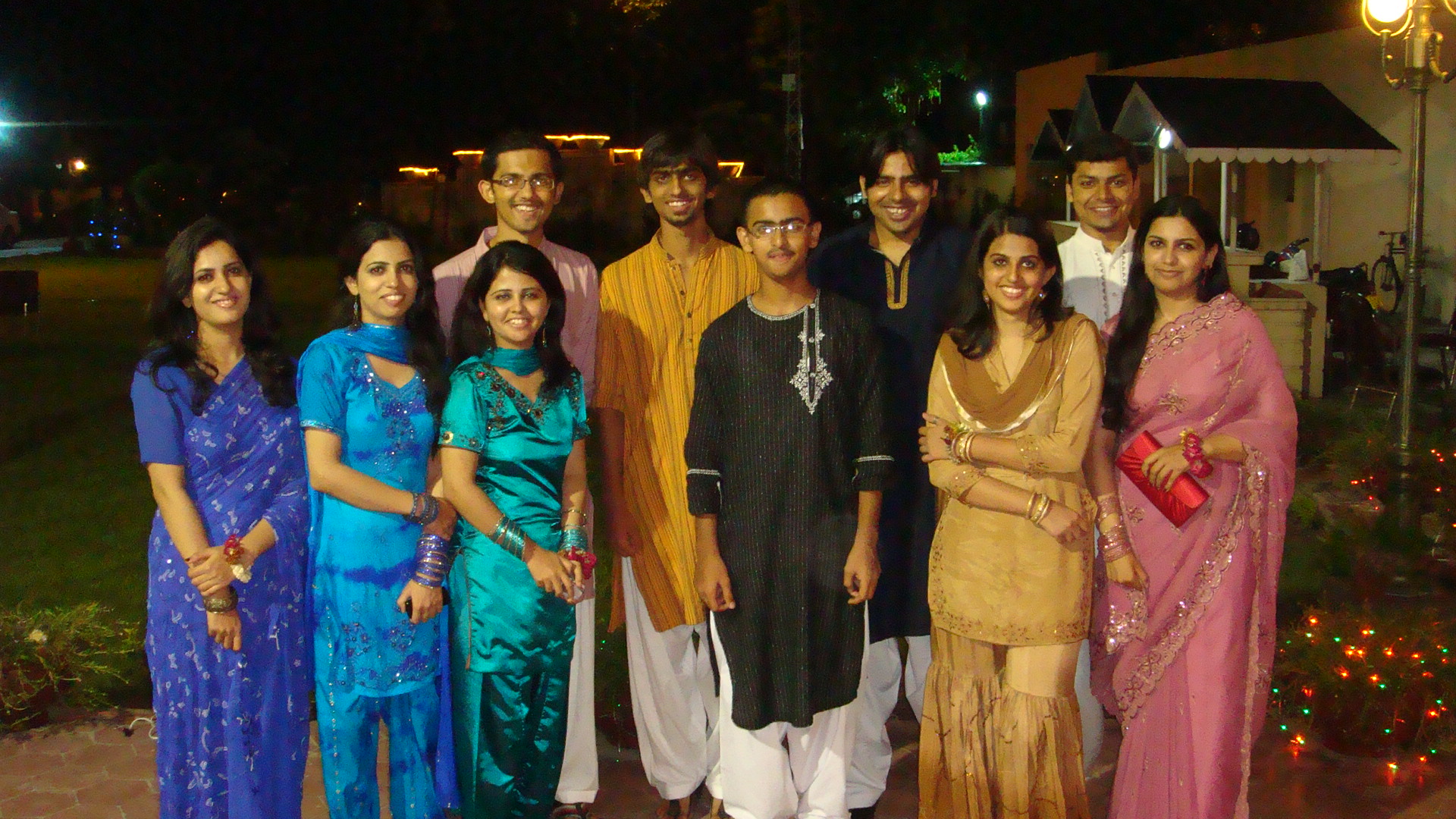 Now, let’s discuss one of the words I just mentioned above: pajama! Sound familiar? The word pajama was borrowed into English from Hindustani (پاجامہ) in around 1800; yet the Hindustani word itself was originally borrowed from the Persian “paay-jaameh” (پايجامه‎)  or “leg garment; this term merely indicates loose-fitting, lightweight pants with a drawstring (izaarband/ازاربند) around the waist, not the clothes you sleep in 😉 This lower garment is worn by both men and women today. As for another lower garment mentioned above, the دھوتی/dhoti is worn by men throughout South Asia and usually consists of around 15 feet of (generally cotton but can be silk for a special occasion) rectangular, unstitched cloth that is draped around the legs and waist and tied at the waist to create a comfortable, airy garment that is perfect for lounging, doing work or, in some cases, getting married! 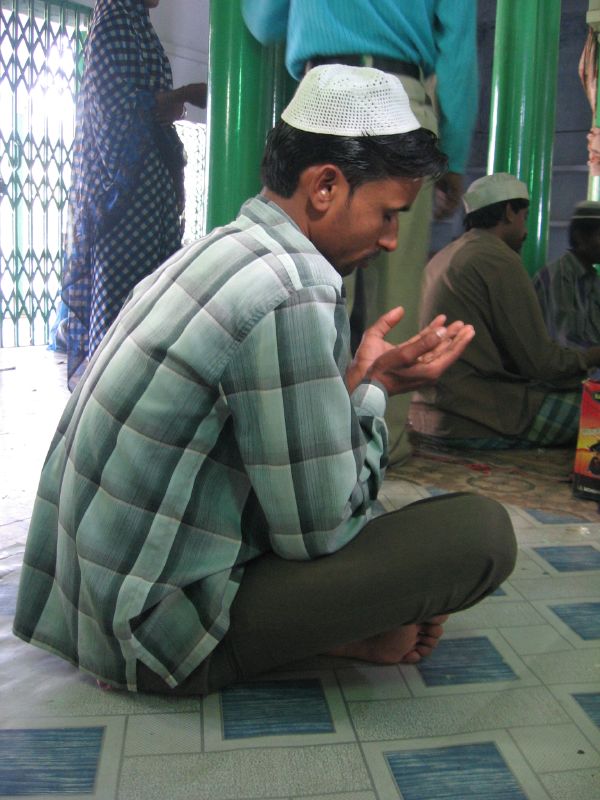 Image by Matteo on Wikimedia Commons, licensed under CC BY 2.0.

As for all-important headgear, Muslim men, especially, wear a taqiyah (Arabic: طاقية), or, as it more colloquially known, a ٹوپی/topi (cap), which is a squat, round skullcap worn oftentimes for religious purposes. It is considered proper to cover your head while entering a mosque to partake in prayer as the Prophet Muhammed was said to have kept his head covered while engaging in religious activities. This kind of head covering is particularly prevalent while Muslims engage in نماز/namaaz, or the five daily prayers that form one of the five pillars or commendable practices of Islam.

A dupatta (دوپٹا or چنّی/chunni) is a common accessory or feature of a woman’s outfit, although many women living in large cities may not wear them, or may wear them as a fashion accessory rather than a “symbol of modesty,” which they were originally intended to be. A dupatta or chunni is just a long scarf that, when worn for modesty’s sake, is draped across the chest or across the chest and over the hair, especially when entering a mosque for prayer. 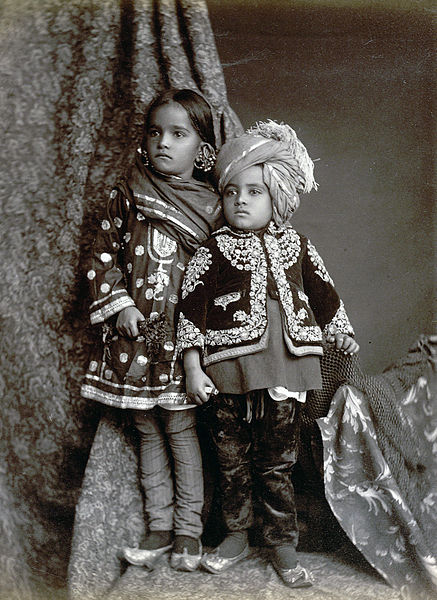 An image of two children taken in the modern-day state of Jammu & Kashmir in 1890; both of the children are wearing churidaar. Image by Fowler&Fowler on Wikimedia Commons, public domain.

گھاگھرا چولی/Ghaghra choli is an outfit women may wear to a special occasion, such as a party or wedding. It consists of a long, flowing skirt, usually heavily embroidered or otherwise decorated, and a form-fitting, midriff-bearing blouse (the choli). A variant of this is the لہنگا/lehenga, which is also comprised of a long, flowing skirt and short upper garment. The variations in style with these two outfits are almost endless. And then, of course, is the ساڑی/sari, a popular garment in both Indian and Pakistan that is perfect for daily wear or a festive occasion. It consists of yards of fabric that are wrapped around the body and over the shoulder. Underneath is a long petticoat and a choli blouse.

Another, less common outfit seen today is a “gharara,” (غرارہ), which originally hails from Lucknow. It consists of a کرتی/kurti (or short, waist to mid-thigh length tunic), a dupatta or scarf and a pair of wide-legged pants that are ruched at the knee so that they may flare out conspicuously. The knee area of the garment (called “گوتا/gota”) is usually intricately decorated with zari/زری (thread work of fine gold or silver) or zardozi/زردوزی (another type of embroidery using gold and silver thread as well as sometimes metal, pearls and precious stones) embroidery.

As for garments that demonstrate a person’s religious devotion, women may wear a burqa (برقع), which is usually a long, black garment that reaches to the feet and covers the head and sometimes face, excluding the eyes. In other words, it is a full-body garment. Another option is the hijab/حجاب, which is usually a piece of cloth that covers the hair and chest, leaving the face exposed. The hijab is typically paired with a loose, long-sleeve or 3/4-inch-sleeve shirt. The purpose of these garments is to suggest modesty, demonstrate religious devotion and emulate the Prophet Muhammed, who was said to cover his head during religious activity. Religious men usually wear long tunics (کرتا/kurtaa) and a head covering, such as a topi (ٹوپی/topi), to similarly suggest modesty and devotion.

The national dress of Pakistan, as you may already know, is the shalwar-kameez/شلوار کمیز, which consists of shalwar or loose-fitting trousers that typically have a drawstring at the waist and kameez, which refers to the upper garment, usually a kurta (a long tunic that varies in its precise length) or a kurti for women (a short tunic that can be waist to mid-thigh length). Every region in Pakistan has its own particular style of shalwar-kameez, from the Sindhi people, to the Punjabis, Balochis and Pathans. Shalwar-kameez can be made out of many different fabrics, but the most common are silk, chiffon and cotton. 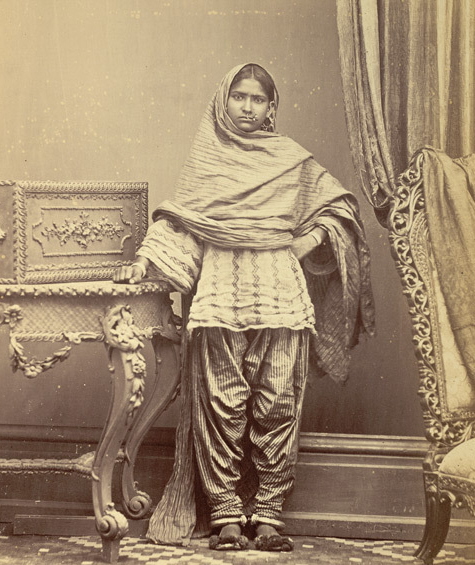 A woman from Karachi, Sind, photographed in 1870 wearing dupatta, kurti and shalwar. Image by Fowler&Fowler on Wikimedia Commons, public domain.

One variation of the shalwar that is particularly popular is the patiala/پٹیالہ shalwar, which gets its name from the city of Patiala in the Indian state of Punjab; centuries ago, the King of the region used to wear patiala shalwar as his royal dress. Now, however, the style has been developed exclusively for women and is noteworthy for the amount of fabric it comprises as it features numerous pleats that drape downwards, creating an elegant effect, flowing together at the bottom.

Another option for a lower garment are churidar/چوڑیدار, named for the extra fabric at the bottom that bunches up at the ankles and gives the appearance of bangles on an arm (churi/چوڑی=bangle). These are more form-fitting trousers worn by both men and women.