Kaifi Azmi’s “The Circle” Posted by Rachael on Feb 20, 2018 in Uncategorized

Kaifi Azmi (کیفی اعظمی, or Sayyid Akhtar Hussein Rizvi, as he was born) is one of Urdu’s greatest poets (شاعر/shaayar) and remains legendary to this day as a poet capable of expressing the subtlest of sentiments with uncanny astuteness and daring. You may recognize his name from that of Shabana Azmi, a famous Indian actress who is also his daughter. Born in 1919 in a village in Azamgarh district, Uttar Pradesh (in what was then British India), Azmi began writing at an early age and achieved fame for his writings not long afterward. In addition to his more literary (ادبیات/adabyaat, “literature” is ادب/adab, masc. noun) work, he is well-known as a lyricist for popular Hindi-Urdu films. Due to his penchant for blending his literary background with the work he did for films, he is remembered today for bringing a refinement and subtlety to Indian films through his literary touch. Along with other famous poets of his day, he took part in numerous renowned “mushairas” (مشاعرا, masc. noun) or poetry gatherings, during his life. He passed away in 2002, leaving behind his poetic legacy for future readers to admire. 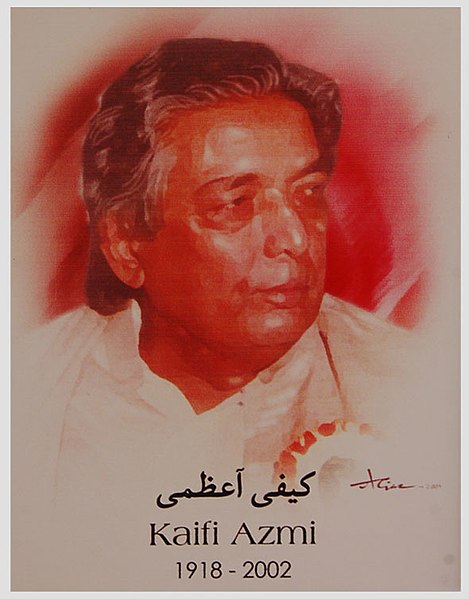 Image by Gufranazmi on Wikimedia Commons, licensed under CC BY-SA 4.0.

Below, I’ve translated one of his classic poems with notes at the bottom where necessary:

A central aim while translating this poem was to depict the “circularity” and drudging mundanity of the poem that strikes one ever more viciously as one continues to read. Although I attempted to be as faithful as possible to the original wording and sense of the poem, occasionally I had to add English words and phrases to the original, as in “day after day I moved forward” instead of the simpler sense of “roz” as “daily, every day.” I wanted the poem to have an arduous, plodding sense about it, weighed down by life’s dullness and cyclical nature, which I tried to achieve with such turns of phrase (others include “many a time,” “time and again,” “corner after corner,” “habitually” and the repetition of “too” to mirror the writer’s repeated use of the word “bhi” in the original). 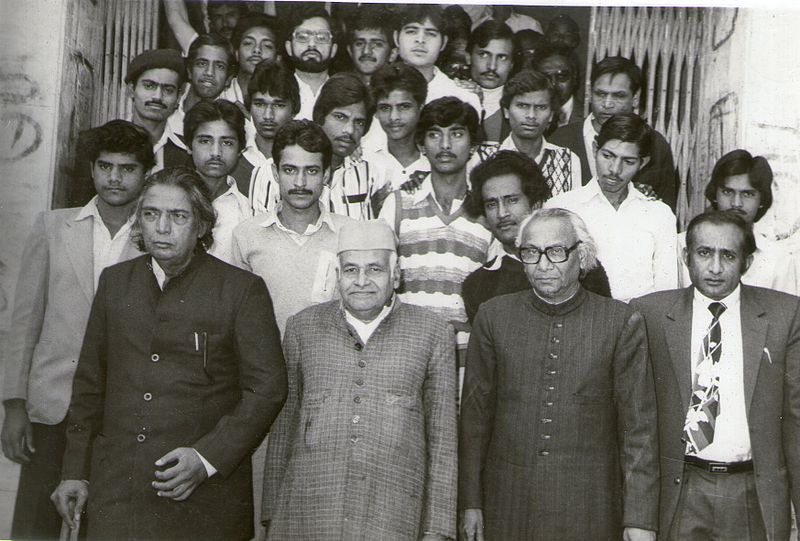 Kaifi Azmi is pictured here in the front, leftmost position; image by Bpldxb on Wikimedia Commons, licensed under CC BY-SA 3.0.

*جہاں/jahaan can mean both “place” and “world,” and it is good to consider both senses of this term while reading the poem

*سراب/saraab technically means “mirage,” but I substituted it for “self-deception” to preserve the alliteration and rhythm of the line

*قرآن/Quraan, of course, refers to the Islamic holy book and گیتا/Gita refers to the “Bhagavad Gita,” a religious and philosophical text found in the Hindu epic poem Mahabharata that contains a dialogue between the god Krishna (an avatar of Lord Vishnu) and the prince and warrior Arjuna

*سیتا/Sita is the heroine of the Hindu epic poem Ramayana who is the wife of the tale’s hero, Rama. She is sought after due to her beauty by the evil King Ravana, who uses deception to abduct and imprison her on his isle of Lanka. The rest of the poem is devoted to Rama’s journey and struggles to find and free her. The “lines and borders” Azmi refers to can also be an allusion to the “Lakshman Rekha” or the magical line that Lakshman, Rama’s brother, draws around Sita at the beginning of the tale to protect her from abduction, a strategy which ultimately fails.