A Fun Arabic Game! Posted by yasmine on May 29, 2019 in Arabic Language, Vocabulary

😀 In this post we’ll be learning how to play an Arabic game that can make improving your vocabulary and spelling skills fun!

Growing up in Jordan, at school, in between lessons, we played a game لُعْبة called “حَرْف – إسم – حَيوان” meaning “letter- name – animal”. Each player has a piece of paper divided into seven columns and at the top of each column you have the following:

Each player has a turn to pick a letter and once that letter is chosen everyone begins filling in the first row with words that begin with that letter as fast as they can: Here is an example below: 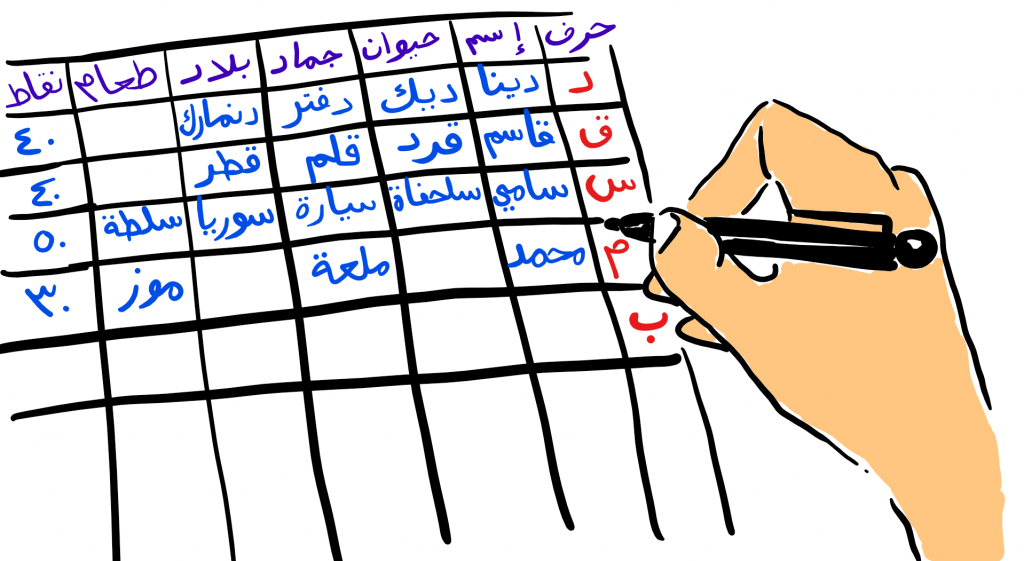 Everyone must stop writing once one of the players says he/she is finished.

When it comes to counting points, if you wrote down a word that no one else wrote, you get 10 points, if someone else had the same word, you get 5 points. If you couldn’t think of a word, you get 0 points. Of course, by finishing first, you get an extra 10 as long as all your words make sense.

The game would last around 5 to 10 rows. Once everyone decides to end the game, each player counts their points and the one with the most points is the winner الفائِز.

I don’t know if you recall me mentioning in my first introductory blog post that I moved to Jordan as a 10-year-old which is when I began learning Arabic. This game was a very fun way for me to learn more words and practice my spelling. As Arabic learners, you could definitely play this with other Arabic learners/speakers or play by yourself if you don’t mind the competing aspect taken out of the fun. 😏 You can always add or remove categories and make it your own.

I hope you try playing this game! It’s a fun way to test your Arabic vocabulary and spelling skills! 😀