Arabic is full of words that are spelled the same but have different meanings and words that are spelled the same but pronounced differently. One example is the Arabic particle ان – alif and nun, with no ء hamzah or diacritics. Their addition and position make the word versatile. When the ن has fahHah with shaddah  َّ (إِنَّ and أَنَّ), it resembles the past tense verb; when it has sukuun (إِنْ and أَنْ), it resembles other particles. This post is about the ان, namely how the position of the hamzah and the type of diacritical mark on the ن affect its meaning and usage. 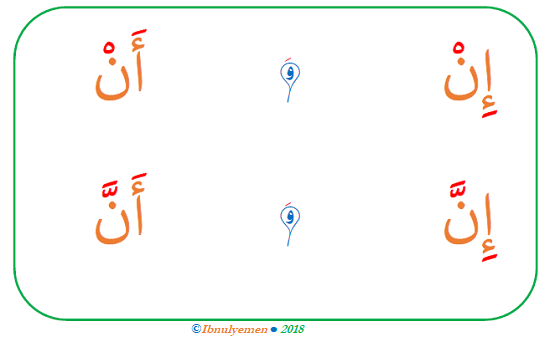 إِنَّ and أَنَّ are similar to verbs for two reasons. First, they are composed of three letters, أَ + نْ + نَ = أَنَّ and إِ + نْ + نَ = إِنَّ. When two letters occur in a single, they become one with shaddah, if the first has sukuun and the second carries another diacritical mark, hence نْ + نَ become نَّ. Secondly, they final diacritical mark is fatHah like the past tense verb. Besides, meaning-wise they carry a verbal sense which means ascertained.

إِنْ and أَنْ resemble prepositions and other particles because they are composed of two letters only, like most particles. In addition, they don’t carry any meaning unless they are put with another meaning-bearing word – a feature of most Arabic particles and prepositions. Also, the ن has a sukuun like most preposition since preposition are never assigned parsing marks.

إِنَّ and أَنَّ are used with the nominal sentence الجُمْلَة الإِسْمِيَّة. Both change the parsing mark of the topic المُبْتَدَأ from nominative to accusative, while the predicate الخَبَر remains nominative. إِنَّ is used at the start of independent nominal sentences, after the verb of saying ‘to say’ قَالَ, يَقُوْلُ, قُلْ, and after the oath وَاللهِ ‘I swear’, as in the these examples:

أَنَّ is used in the middle of sentences, after certain verbs. It along with the topic المُبْتَدَأ and the predicate الخَبَر functions as the subject فَاعِل or the object مَفْعُوْل of the preceding verb. It is also used after prepositions and adverbs that are followed by (genitive nouns مُضَاف إِلَيْه), as in the following examples:

(3) Meaning of إِنَّ and أَنَّ:

At the start of the independent nominal sentence, إِنَّ means indeed, certainly, or truly. It is used to underscore that a feature of something or a characteristic of someone is absolutely right. Hence, when you say إِنَّ اللهَ غَفُوْرٌ رَحِيْمٌ, it means Allah is undoubtedly forgiving and merciful.

أَنَّ has the meaning of a linking word. It means that, like to the English that in phrases like ‘think that …, believe that …, said that … and so forth’, as in the second set of examples above.

(4) Usage and Meaning of إِنْ and أَنْ:

The most common usage of إِنْ is as a subordinating conjunction in a conditional sentence. It begins the subordinate clause, which come at the start of the complex sentence, as in the examples below. As you can see from the examples, إِنْ means if.

إِنْ is also used to negative nominal and verbal sentence, just like مَا, لا, and لَيْسَ. In this case, it does not affect the topic المُبْتَدَأ or the verb الفِعْل. This usage is very formal and literary.

أَنْ, which means ‘to’, is used with present tense verbs and less frequently with past tense verbs. With the present tense, it can be used at the start of the sentence, and in this case, it and the verb that follows constitute the topic المُبْتَدَأ and the remainder of sentence is the predicate الخَبَر. For example, when you say أَنْ تَقْرَأَ خَيْرٌ لَكَ ‘to read is better for you’. أَنْ تَقْرَأَ is the topic مُبْتَدَأ and خَيْرٌ لَكَ is the predicate خَبَر. Here are more examples:

Using it in the middle of the sentence is more common. In this case, it is usually preceded by a present tense and followed by a verb in the same tense, as in the examples below.

أَنْ is also used with other words to form two-word subordinating conjunctions, such as قَبْلَ أَنْ ‘before’ and بَعْدَ أَنْ ‘after,’ among others. The verbs after أَنْ in these connecting phrases is usually in the present (but may also be in the past), as in these examples:

Although the verb in the first two examples is in the present tense, it has a past meaning due to the قَبْلَ in the connecting phrase. It refers to the past.