Active and Passive in Arabic: Practice and Examples Posted by Ibnulyemen اِبْنُ اليَمَن on Jul 31, 2018 in Grammar, Vocabulary

In the previous post, you learned about the passive voice المَبْنِي لِلْمَجْهُول in Arabic, and how an active مَعْلُوم sentence is changed into passive مَجْهُول. Besides leaving some words out from the active sentence, verbal internal (i.e. non-final) diacritical marks or short vowels must change. This is essentially the most obvious change in verb forms. Also, with irregular Arabic verbs, weak letters (i.e. ا, و, and ي) often change. In this post, you will have further practice and see more examples of how to change active sentences to passive. 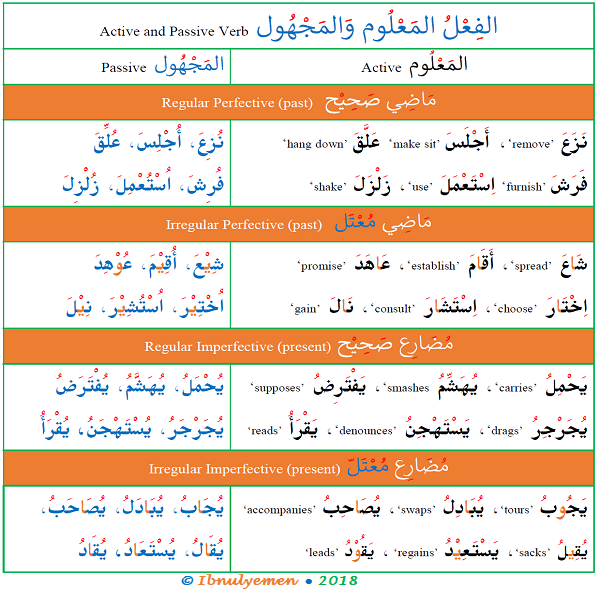 Following is a list of sentences in the active and their equivalents in the passive:

While changing the perfective active form of the verb that is a four-letter verb into an imperfective form, the first letter which indicates the present (i.e. أ, ن, ي, ت) must be accompanied by Dhammah مَضْمُوم, as in شَاهَدَ يُشَاهِدُ, صَاحَبَ نُصَاحِبُ, هَشَّمَ  أُهَشِّمُ and so forth.

With irregular imperfective forms, the firs letter is always accompanied by Dhammah مَضْمُوم, and the weak letter is always changed into an alif in the passive event if it is pre-final. For example, with يَجُوب, يُقِيْل, يَسْتَعِيْد, and يَقُود, the pre-final و waaw and ي yaa’ are changed into an alif, hence يُجَابُ, يُقَالُ, يُسْتَعَادُ, and يُقَادُ.

Following is a list of imperfective active sentences and their passive equivalents: