Ahlan, Arabic lovers! Today I am going to tell you about the Report of the Committee for the Modernization of the Arabic Language Teaching. The Title that the committee chose to name their report is “Arabic for Life الــعــربــيــة لــغــة حــيــاة“. It symbolizes the importance of teaching and learning Arabic both to native Arabic speakers and non-natives. 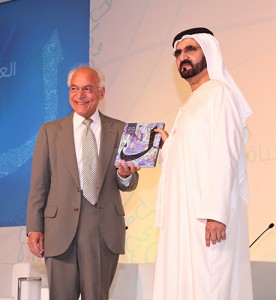 On Monday 13th. May, 2013 Sheikh Mohammad Bin Rashid Al-Maktoum  الــشــيــخ مــحــمــد بــن راشــد آل مــكــتــوم ; vice President and Prime Minister of the United Arab Emirates and Mayor of Dubai, received the Report on the Modernization of the Arabic Language Teaching. A year earlier, Sheikh Mohammad had directed to form a committee that included some elite figures from academia, education, media and politics. The main goal of the committee was to set a vision to reinforcing the status of the Arabic language in order to make the country a center of excellence for Arabic as a tool to enhance the national identity of upcoming generations. The report was based on a realistic study of the status quo of the teaching of Arabic, the methodologies used and the challenges that face its teaching and learning. The report ends with some suggestions and recommendations on the best practices for teaching and learning Arabic.

Members of the Committee:

In tomorrow’s post – En Sha’a Allah – I will summarize the report. Stay tuned!

You can download the full report in Arabic here.