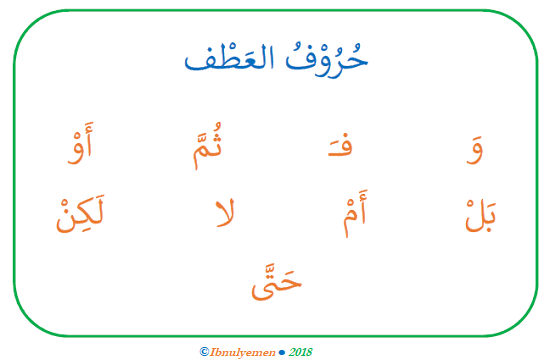 It is the most common coordinating conjunction in Arabic. It means that the things, persons, or actions that are coordinated by و accompany each other or happen alongside each other, as in these examples:

فَـ is used for ordering and sequencing, that is the order in which two things, persons, or actions occur/happen. It is also use for expressing a consequence, as in these examples:

Besides being a negative particle (used to negating present verbal sentence), لا coordinates two nouns in an affirmative sentence, affirming that the action was done by the first person/thing and not the second, as in these examples:

If لا is used after و in a negative sentence, it for negation rather than coordination, and و becomes for coordination. In such sentences, لا is added to emphasizes negation, as in these example:

ثُمَّ is used for sequencing but with a kind of delay in the subsequent action, as in these examples:

Besides being a preposition and a particle used with present tense to indicate a future action, حَتَّى is a coordinating conjunction used for glorification or abasement, as in these examples:

لَكِنْ is used for correcting what is being said, that is one says one thing and you correct it by providing a different noun/action verb in a negative statement, as in these examples:

أَمْ is used with the yes-no interrogative statement to mean ‘or’, that is with yes-no question that begins with هَل (less formal) or أ (formal), which both mean (do/does, did, is/are) in a yes-no question, as in these examples: