Countries of the Arab World Posted by Transparent Language on May 16, 2010 in Culture, Uncategorized

The following is a list of Arabic-speaking countries that form what is considered the Arab world (العالم العربي). With the exception of Western Sahara, whom is administered by Morocco, the following countries are also the states that form the League of Arab States جامعة الدول العربية, a body of states that loosely resembles the EU. The Arabic speaking population of the following countries is circa 360 million people. There are countries not included in this list where Arabic is considered an official language or is spoken by a sizable portion of the population. Chad and Eritrea are two such examples.

I’ve included a map of the Arab World where country names are written in Arabic. See if you can match the names found on the map with those I included in the list. 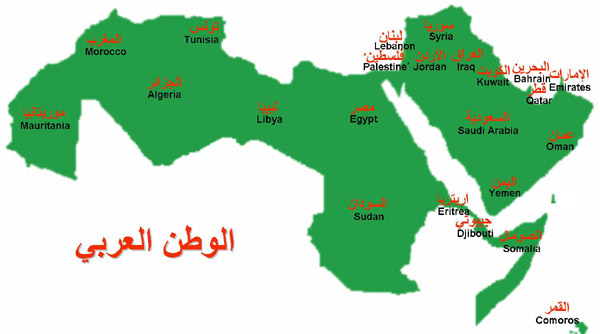