How to Order and Give Instructions in Arabic Posted by Ibnulyemen اِبْنُ اليَمَن on Feb 8, 2018 in Arabic Language, Grammar

To give orders or instructions in Arabic, full verbs in the imperative form are used.  In Arabic, ‘order’ is أَمْر and its plural is أَوَامِر and ‘instruction’ is تَوْجِيْه and its plural is تَوْجِيْهَات. A full verb is the verb that indicates an action, as لَعِبَ ‘to play’, كَتَبَ ‘to write’, وَعَدَ ‘to promise’ and alike. In this post, I will illustrate how to derive an imperative form from different types of verbs. 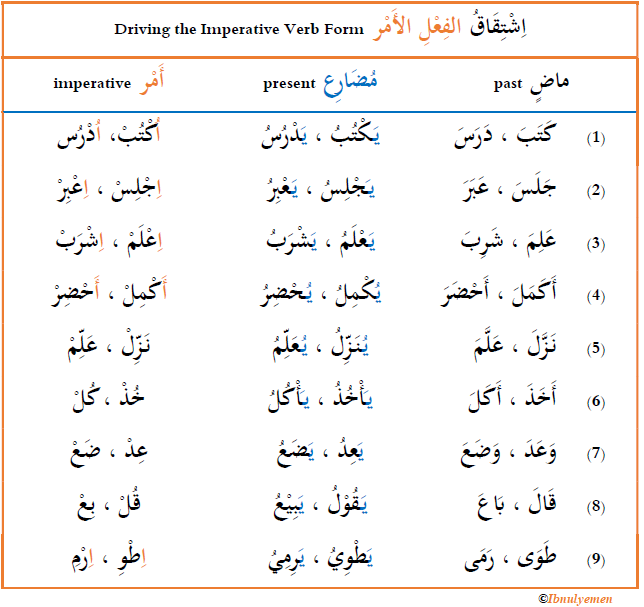 a) if the first letter of the remainder verb has a sukuun, then alif wasl should be used, as in examples 1, 2, 3, and 4 in the table above. The justification for adding alif wasl is that in Arabic starting a word with a sukuun is not allowed. Besides, the diacritical mark of alif wasl must be Dammah if the third letter of the present form diacriticized with it, hence يَكْتُبُ become اُكْتُبْ.

c) If the first letter of the remainder verb is hamzah, then it must be dropped and what remains will constitute the imperative form, as in example 6. The reason why hamzah is dropped is that it has a sukuun, and if the rule in (a) is applied, then we will have a sequence of alif wasl and hamzah which, according to the spelling rules, must convert into alif madd (i.e. آ). This, as a consequence, generates a different word form, that is a noun or the 1st person singular present verb form.

d) If the past form of the verb begins with و, which is a weak letter, as in example 7, it is usually dropped in the present prior to adding the يـَ of the present. Then the remainder verb after dropping the يـَ will constitute the imperative form as 7.

e) The final diacritical mark of all imperative verbs that does not end with a weak letter (i.e. ا, و, or ي) must always be a sukuun, as seen in the table of examples. However, if the remainder verb after dropping the يـَ of the present has two final sukuuns in a sequence, that is the last letter and the one before last, then the one before last must be dropped altogether, as in 8. As a side note, most imperative forms should end in a sukuun because it indicates that the action will take place in the future (i.e. after the time of speaking in this case). And on the subject of final diacritical marks on verbs, Dammah mean that the action takes place in the present, and fatHah means that the action takes place in the future. As for dropping the letter before last, in Arabic a sequence of two sukuuns is disallowed; therefore, the first letter in order is always dropped.

The above derivations show how to make a positive imperative form. To command or instruct someone not to do something, we use the 3rd person masculine singular present form following these steps:

The justification behind retaining the same internal and final changes of positive imperative form is that grammatically imperative forms are assigned the jussive case (i.e. sukuun) because they are to take place after the time of speaking. Other irregularities mentioned above also apply here.