The Noun الاسم alism in Arabic, any noun that is derived from the verb, can be either Indefinite نَكِرَة nakirah or Definite مَعْرِفَة ma‘rifah. The Indefinite النَّكِرَة an-nakirah is almost always changeable to Definite following to two morphological rules. Not every Definite, however, is changeable to Indefinite. That is, there are certain nouns that exist only in the Definite form, i.e. not back-formed to Indefinite. 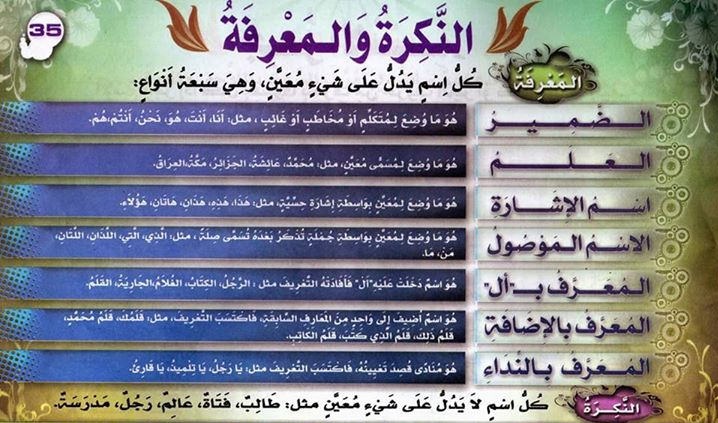 Image by Mohamed Khatab on flickr.com

The Indefinite Noun in Arabic is the noun that refers to non-specific entity. It is the default form of nouns that its definite counter form is derived from. In MSA, Indefiniteness is marked, i.e. clearly specified, by using nunnation تَنْوِيْن tanween. tanween in Arabic essentially means that the noun is indefinite. One of three forms of tanween is added to the end of the noun, that is tanween al-fatH ً , tanween al-kasr ٍ , or tanween aDHamm ٌ. The type of tanween that is added to the noun depends on the grammatical position of the noun, i.e. subject, object of a verb, or object of a preposition. In colloquial Arabic, Arabic speakers opt for تَسْكِيْن taskeen, i.e. avoiding final diacritical marks altogether, as in this list:

Making an indefinite noun in Arabic definite using this rule is straightforward. You simply add the الـ to the beginning of the indefinite noun. In MSA, the tanween is to disappear and is to be replaced by the corresponding single diacritical mark, i.e. fatHah َ , kasrah ِ, or DHammah ُ. In Dialects, the only apparent change is the addition of الـ. Here is how the above list would look like after adding الـ.

Another thing you should mind while changing the indefinite into definite in this way is the pronunciation of الـ. If the letter following الـ belongs to the Sun Letters category, it must be assimilated. If it belongs to the Moon Letters category, it mustn’t be assimilated. Hence, the definite article الـ is what distinguishes the Definite المَعْرِفَة from the Indefinite النَّكِرَة.

In this case, you must note that the separate pronoun changes to its corresponding object (attached) pronoun as it is attached to the indefinite noun, hence for أَنْتَ , use كَ; for أَنْتِ , use كِ; for أَنْتَم , use كُم; for أَنْتُمَا , use كُمَا; and so forth.