مرحباً!  If you’re studying Arabic, then you probably have Jordan as one of the Arab countries on your list to visit. Of course, if you are interested in Arab culture, Jordanians for the most part are Arabs, yet Jordan is also home to a few non-Arab ethnic minorities (أقليات عرقية) who have adapted to Arab culture yet have kept their own unique cultural identities (هويات ثقافية). These ethnic groups are the Circassians, Chechens, Armenians, and Kurds.

These four ethnic groups make up 2 % of Jordanian’s population. That may not be much, but they add much diversity (تنوع) and richness to Jordanian culture. They each have their own language, traditions, cuisine, music, and dance. With time, they have adapted to Arab culture, speak fluent Arabic, and have representatives in the Jordanian parliament.

Circassians make up the biggest percentage of these ethnic groups numbering to about 190,000. They come from the Caucasus region who were displaced (شُردوا) in the 19th century due to the Russian conquest of the Caucasus resulting in the Circassian genocide (ابادة). They began settling in Jordan in the 1870’s. Below is a photo showing Bedouin and Circassian chiefs in Amman in 1921. 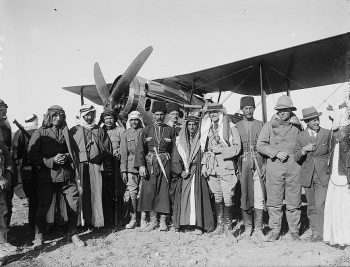 When visiting Jordan, be sure to be on the lookout for Circassian folklore performances! Here is a video showing clips of a Jordanian Circassian dance group performing for the King and Queen of Jordan: الرقص الشركسي في الأردن

The Chechens, like the Circassians, also come from the Caucasus. They settled (إستقروا) in Jordan in the early 1900’s after leaving Chechnya during the Caucasian War. Despite Chechnya now being an independent state (دولة مستقلة), Jordanian Chechens still choose to remain in Jordan and proudly identify themselves as Jordanians of Chechnyan origin.

Kurds make up around 30,000 of Jordan’s population. They are considered an Iranian ethnic group who settled in Jordan in both the 19th and 20th centuries. Unlike Kurds in other Arab countries such as Iraq and Syria where they have been facing persecution (اضطهاد) and discrimination (تمييز), Jordanian Kurds live a safe life and have equal rights to those of their Arab neighbors.

Armenians originally from Armenia, settled in Jordan in the early 20th century as a result of the Armenian genocide that took place during WWI. Their numbers estimate to be around 4,000. Not only is Jordan a safe home for Armenians, but they can openly and freely express (يعربون عن) their culture and language.

So, there you have it, Jordan’s little melting pot (بوتقة)! If you ever visit Jordan, keep in mind the people you meet and talk to in Arabic may be of different cultural backgrounds. Jordanians are always happy to discuss culture and history, so It doesn’t hurt to ask where they originally come from!

If you’d like to read about Jordan’s population in Arabic, here is an article: سكان الأردن

Also, here are a few short documentaries and interviews in Arabic about each ethnic group living in Jordan: