Welcome to the second part of this post. Last week, I started sharing with you some of the popular hashtags and phrases that people circulated on Twitter across the Arab, with regards to the Coronavirus. The diversity of Arabic تنوع العربية and its dialects ولهجاتها was clearly reflected in انعكس بوضوح في how Arabs responded الطريقة التي استجاب بها العرب to the self-isolation strategy استراتيجية العزل الذاتي that people around the world started practicing about three weeks ago. We will continue today looking at some of the hashtags used in the Gulf countries and North Africa. 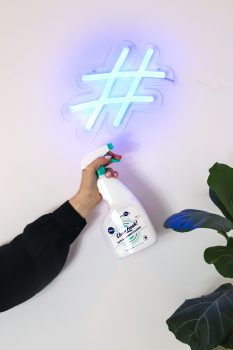 Last week, we started with Levantine Arabic and focused on the hashtags and slogans created by people in Lebanon. Before moving on to the rest of the dialects, I would like to finish off covering the hashtags used in Jordan as the Arabic used there is still considered part of the Levantine Arabic.

Similar to Lebanon, Jordanians were also creative! In addition to the more general خليك بالبيت hashtag, they had one that’s unique to their dialect, and that is:

Instead of using “il–be:t” or “il-bait” which is what Arabs in the Levant and Gulf region as well as Egypt use for “house”, Jordanians also used “id-daar” which is another word for “house”. Interestingly, “daar” is a room in Standard Arabic! 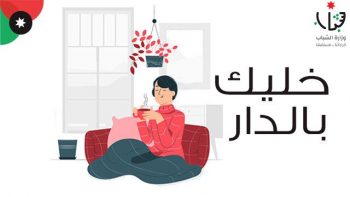 Image by on Ministry of Youth on https://twitter.com/MoY_JO

There were also some funny phrases that got popular, such as:

While “xalee-k” خلّيك is a neutral verb that just tells people to stay home, the two verbs above “2inDabb” and “2intišib” are a bit vulgar and are sarcastically used as a way to show people’s frustration at others who keep complaining and can’t seem to stay at home. Both phrases are followed by the phrase “mishaan Allah” مشان الله to mean “for God’s sake”.

The most popular and generic hashtag used in addition to> #خليك_في_البيت (stay at home), was:

“2igʕid” from the Standard Arabic “Qaʕad” is used in many Arab countries, but is pronounced differently.

(Stay in safety for the sake of Oman)

Moving on now to the last group of dialects we’re focusing on in this post and that’s that used in north Africa.

Starting with Tunisia and Algeria, the following hashtag was very popular:

It’s the same verb used in the Gulf region, only different in terms of pronunciation. The letter ق  qaaf is pronounced as it’s in Standard Arabic, as opposed to “g” in Gulf Arabic.

(Stay at your home: if you’re not worried about yourself, worry about your family)

*Xaaf: “to be scared” rather than “worry” is what is used above but “worry” here does a better job at conveying the intended meaning. 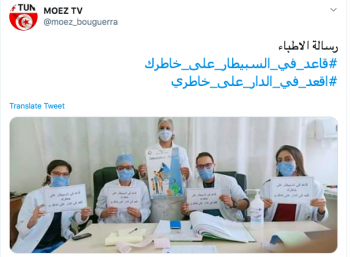 Image by Yesmin news on https://twitter.com/MoezBouguerra

I’m staying in the hospital for you

stay home for me

The other interesting word here is that for hospital “iS-SbeTa:r”, which is uniquely used in North Africa instead of “mašfa” in Levantine Arabic, e.g.

Our last destination is Libya! Libyans made sure to come up with hashtags that highlight unique words that are only used in the Libyan dialect, and that is the Libyan word for “house” and that is “Ho:š” حوش.

(Stay at your home/house)

Libyans are the only Arabic speaking group that use this word to mean “house” while the rest of Arabs use it to mean “backyard”!