Ahlan, Arabic lovers! Today, we will talk about Amr Diab; the famous Egyptian singer. Amr celebrated 55th birthday on October 11th and guess where he celebrated it? At the gym! Amr is a pop singer and songwriter. He won many music awards جوائز. He set a world record as Best-Selling Middle-Eastern artist. 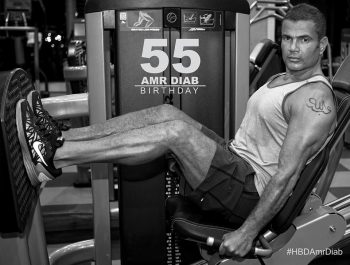 Amr Abdul-Basset Diab عمرو عبد الباسط دياب was born in Port Said بورسعيد Egypt to an artistic family. His father was an employee at the Suez Canal Corporation.  He encouraged his son from early age. Amr’s passion and talent appeared when at the age of six, he sang the Egyptian national anthem “Bilady, Bilady بلادي بلادى” in front of the governor who gave him a guitar present. Since then, Amr began to be recognized nationally and internationally. Amr holds a bachelor degree in Arabic Music from Cairo Academy of Arts in 1986.

Diab started his musical career with the album “Ya Tareeq يا طريق”, which was released in 1983. He worked so hard that he used to release an album every year till 1995. In 1996, he cooperated with “Alam El-Phan عالم الفن”; a leading music company and released his album “Nour El-Ain نور العين”. This album was Diab’s gate to international success. In 1999, he collaborated with two universal singers; Cheb Khaled الشاب خالد and Angela Dimitriou أنجيلا ديمتريو in two dueto songs. He gained a great recognition beyond the Arabic speaking world. He was very inelegant that he worked hard to create his own style. His style is often termed “Mediterranean Music موسيقى البحر المتوسط”, a blend مزيج of western and Egyptian rhythms. He introduced a new concept of music, especially in his international song “Nour El-Ain” that he was nicknamed as the “Father of Mediterranean Music أبو موسيقى البحر المتوسط”.

In his 55th. birthday, Diab posted a short video from the gym, talking to his fans that sports is the secret beyond his young look. He is active fitness enthusiast. In March, 2016, he released his own sports collection that was entitled with his name. This collection depends on only two colors; black and white. It has his own sign. It isn’t the first time for Amr to release an online shop. He did that in 2014 for selling his products.

Diab was married to Shereen Reda شيرين رضا, from 1989–1992, ending in a divorce. They have one daughter, Nour نور, who became known through the song, “Habibi Ya Nour El Ain”. Diab is currently married to Zeina Ashour زينة عاشور, and they have three children; Abdallah عبد الله, Kenzy كنزي, and Jana جنا.

Check us back Soon