We are going to continue our study of the Verbal Sentence الـجـمـلــة الـفـعـلـيـــة . We have already discussed the Verb in more detail and the Subject or doer of the verb. We have also started discussing the subject-verb agreement; how the verb looks like with different subjects. All that was in the active voice in active sentences with active verbs. Today, I will introduce the Passive Voice in Arabic sentences and we will start with the subject of the passive verb which is termed The Deputy Agent. Now what is a deputy agent? 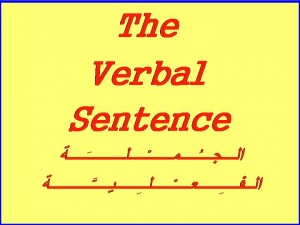 Definition: A Deputy Agent is the noun that follows a passive verb in the Arabic verbal sentence.

This noun is always in the nominative case (usually has a Dhamma on its ending letter). Let’s look at these two example sentences.

Now, if we look at the first example sentence, we will notice that it is a verbal sentence. The verb of this sentence is كــَــتــَــبَ (wrote) which is in the past form. Who wrote? الــطــَّــالــِــبُ (the student). So, الــطــَّــالــِــبُ is the subject of the verb; (the doer of the action) and it is in the nominative case having a Dhamma on its ending. Hence, we know that the sentence is in the active voice. The verb كــَــتــَــبَ (wrote) is a transitive verb and it needs an object to complete its meaning. So, wrote What? الــدَّرْسَ (the lesson). The word الــدَّرْسَ is the object of the verb كــَــتــَــبَ ; (the receiver of the action). The object is in the accusative case and has a Fat’ha on its ending.

Now, how is the second example sentence different? The second sentence is in the passive voice. It starts with the same past verb. However, the past verb كــُــتــِــبَ (was written) has different voweling (diacritics). The verb is still in the past tense but its form is changed to that of a past passive. We will discuss how to derive different passive verb forms later on. Looking at the word that follows that passive verb, we will notice that it is the same as the object of the verb in the first example with a slight change of the voweling on its ending. In the second example, the word الــدَّرْسُ (the lesson) comes after the past passive verb كــُــتــِــبَ (was written) is not – by logic – the doer of the action of writing. Rather it is the receiver of the action. That is why it changes case from accusative (Fat’ha) to nominative (Dhamma) and it is no longer the object of the verb but the passive subject of the passive verb. We call this passive subject of the passive verb the Deputy Agent نــَــائــِـــبْ الــفــَــاعــِــلْ/Na’ib Al-Fa’il/ and it is always in the nominative case.