This post focuses on two very popular proverbs مثلين مشهورين جدًا  in spoken Arabic. Both are related to the topic of food  موضوع الطعام. The intended meaning of both of them is positive إيجابي. While one is a prayer دعوة/أمنية  to the “eater”, the other is considered an advice نصيحة. Below, a detailed explanation of each of the proverbs: their literal meaning المعنى الحرفي, the intended meaning  المعنى المُراد/المقصود and finally their applicability  التطبيق or use الاستخدام . 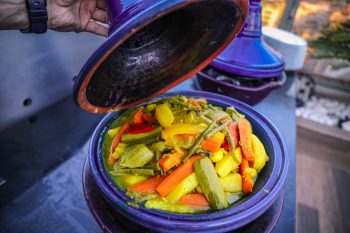 Image by Naim Benjelloun on Pexels.com

The first proverb we’re looking at is:

Where it goes may it pass/ be swollen easily.

“it” above refers to: food.

This proverb is mainly used in Egypt but is also used generally in the Arab world, using the Egyptian Arabic pronunciation. The proverb is another way of saying SaHHa  w  aafya صحّة وعافية , which is said while someone is eating (or after they had eaten) as a way to wish well being and good health. I talked about this phrase in detail in a previous post here.

As is the case with many other proverbs in the spoken Arabic, this proverb also exists in other dialects other than Egyptian, such as its equivalent in Levantine Arabic. It goes like:

The only different is in terms of vocabulary, so rather than “MaTraH”, i.e. place, it’s “MaHal”.

The 1st verb used here is: “yesri” or “yasri” (in standard Arabic), which means> to flow or go through. The verb is also associated with ease, as it’s related to the noun “yusr” يُسْرْ, i.e. ease.

The 2nd verb used here is: “yemri”, which means> to pass by smotthly. The verb doesn’t exist in Standard Arabic, however, it’s derived from the noun “maree2” مريء  which is the English word for oesophagus. So, the verb “yemri” seems to be creatively used to convey the idea of smooth flow and digestion of food.

The second proverb we’re looking at is:

Have lunch and lie down and have dinner and walk

Rest after lunch and move after dinner.

The proverb (in this particular pronunciation) is used in Libya. It’s usually said as a general advice in relation to food. It seems to refer to a difference between lunch and dinner, which can be due to the amount & type of food eaten in each meal: lunch is usually quite fatty دسم  while dinner is relatively light خفيف .

Ironically, recent studies الدراسات الحديث now show تشير إلى  that it’s not a good idea to sleep after a big meal as it causes problems with digestion الهضم, unlike walking.

The 1st verb used that I would like to elaborate on here is: “t-madda” or “tamaddad” (in standard Arabic), which means> to lie down. The verb is closely related to the idea of spreading or stretching in general: امتداد imtidaad.

The 2nd verb here is “t-mašša” which is the second person, imperative tense (in spoken Arabic) to mean “walk”, from walking مَشْيْ.

The proverb is obviously used all over the Arab world, in a slightly different way. For example, in Levantine Arabic, this is how it’s said:

(Have lunch and lie down, even for two minutes)

(Have lunch and lie down, even two steps)