What Should You Know about the Arab Spring? Posted by jesa on Oct 14, 2014 in Arabic Language, Culture

Marhaba! Millions of Arabs took to the streets and toppled what they viewed as authoritarian and unrepresentative regimes (أنظمة). With the plethora of news outlets reporting from Tunisia (تونس), Egypt (مصر), and Libya (ليبيا) during the high tide of the ongoing revolutions (ثورات), it is impossible not to have seen a glimpse of these protests (إحتجاجات) and uprisings (إنتفاضات). But many questioned the origins of these protests. Are they inspired from the West (الغرب)? Were Western intelligence agencies rallying the masses against their own leaders? Are all these protests part of a great conspiracy theory to keep the Middle East bogged down in turmoil (إضطرابات) and upheavals? Well, as most of you know, the list can go on forever. Today, I want to introduce you all to an important book that I think provides historical context to the Arab Spring (الربيع العربي), and in many ways really tells you what should be known about these waves of protests. The book is called The Arab Uprisings: What Everyone Needs to Know (الانتفاضات العربية: ما على الكل معرفته) and is written by one of the world’s leading historians of the Middle East, Professor James Gelvin who teaches at UCLA in Los Angeles, California. 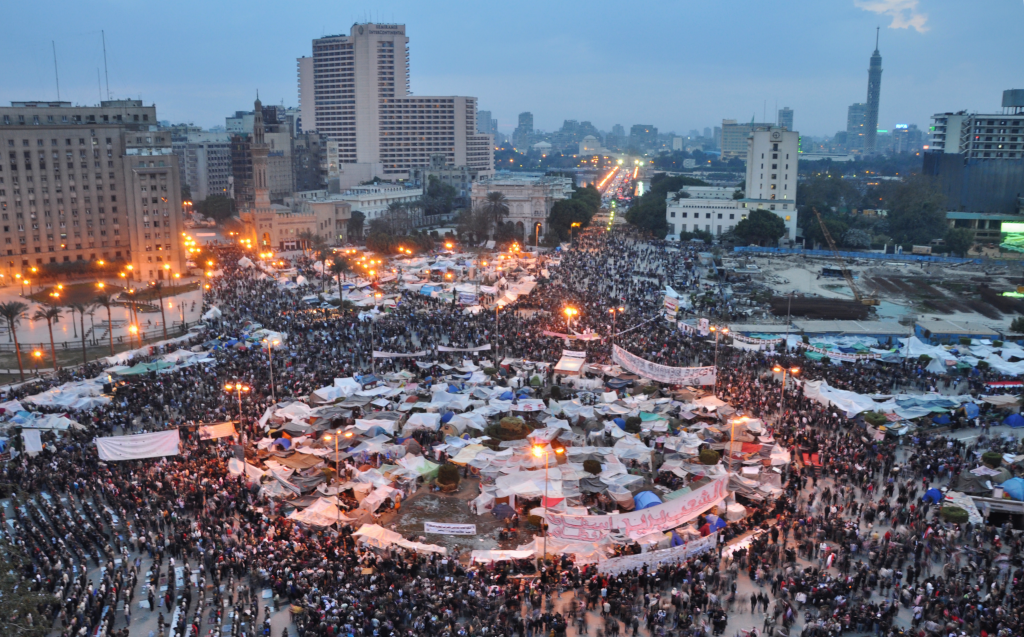 Tahrir Square in Egypt on February 9, 2011 | Image by Jonathan Rashad

The book is divided into 6 chapters (فصول). The first deals with the question of a ‘Revolutionary Wave’ (موجة ثورية) in the Arab world. The second focuses on the beginning of the protests in Tunisia and Egypt. The third concentrates on the mass protests and role of tribes (القبائل) in Yemen and Libya. The fourth centers on the unexpected developments in Algeria and Syria. In this chapter, Gelvin focuses on how the Syrian ruling regime dealt with the beginning of the uprisings. The chapter before last focuses on the question of monarchies (الملكيات) in the Arab world and the reasons behind their endurance. The last chapter provides the backdrop to the Arab Spring by considering American intervention in Iraq and how Iran perceived these protests. Gelvin’s book uses a Q&A format to explain and answer all these questions across the chapters. His attempt is framed as what everyone should know about the causes (الأسباب) and beginnings (البدايات) of the uprisings in the Arab world from Tunisia to neighboring states in the Arab world, and the reasons that compelled millions of Arab citizens to revolt against their rulers. One of the most important contributions that Gelvin makes is that these uprisings do not fit traditional theories on democratic transition, and that attempts to contextualize the Arab Spring as a beginning for democratic transitions that follow a Western paradigm is but “wishful thinking.” I have had the pleasure to meet Professor Gelvin in person and as an Arab I firmly believe that this book makes an important contribution and provides context to the Arab Spring. The book is available on Amazon.com and if you’re sometimes worried and as passionate as I am about what is happening in Tunisia, Egypt, Syria and other Arab states, you will certainly find this book useful.

Have a nice day!!