Today, I would like to share with you some insights about Arabs’ extreme love for a type of food that they don’t seem to be able to live without! That food item is nothing but bread Al-khubz الخبز . This is not just metaphorical image as in some parts of the Arab world, but bread is indeed called ʕe:š (eash) in spoken Arabic which is a modified pronunciation of the word “ʕaish/ʕaiš” عيش in Standard Arabic, which is derived from the verb ʕa:š/ ʕaash عاش, i.e. “lived”.

In this post, we’re going to know more about the significant importance of bread in the Arab region and the most famous type of bread Arabs make and eat.

As mentioned above, bread is so important for particular parts of the Arab world that for them having no bread means no life. There’s a popular Egyptian Arabic proverb that reflects this importance. The proverb goes like this: (أكل العيش مرّ   akl il- ʕe:š murr = eating bread is bitter/difficult) which mean “Earning a living is bitter”. Interestingly, earning a living here is referred to as being able to afford eating bread.

The word ʕe:š was even included in the main political slogan of the Jan 25th revolution ثورة ٢٥ يناير  in Egypt, 2011. Protestors in Tahrir Square chanted>>

These three words above summarised Egyptian people’s demands مطالب الشعب المصري and being able to afford bread (which symbolises having a decent life) was the first one – as was the case in old revolutions, such as the French revolution.

More about the word “ʕe:š”

The word was first used in Egypt to refer to the traditional bread people use there and then it was generalised to refer to all kinds of bread.

Interestingly, the word ʕe:š can mean a different thing in a different part of the Arab world but what the meaning of the word, regardless of what it specifically refers to, refers to a type of food that people eat on a daily basis in a specific country. So, while people in Egypt call bread ʕe:š, people in the Gulf region call rice ʕe:š as they consume lots of rice daily and rice, to them, is far more important than bread.

It’s also important to mention that not all Arabs call it ʕe:š as people in the levant call it “xibiz/khibiz” and it’s “xubza” in Libya.

A typical piece of Arabic bread is thin and round مدوّرة / دائرية, quite close to the one you have your falafel wrapped in. It looks a bit like a tortilla but not as thin and perhaps as thick as a pitta. Across the Arab region, traditional bread varies in how big the circle is and ow thick the bread is.

The typical Egyptian traditional ʕe:š is small and round as appears below in the photo. It’s usually associated with a poor man holding an open wooden box as he’s riding his bike along the narrow streets of an old neighbourhood – a typical scene you can see in many Egyptian soap operas! 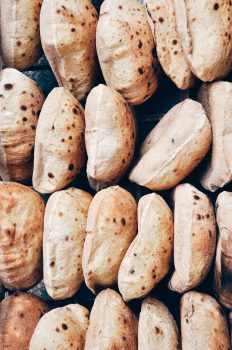 Image by Alex Block on Unsplash.com

Most of the Arabic countries make a specific type of bread that is considered traditional there, and that’s khubz at-tannour خبز التنّور . it’s a type of bread that is made in a special oven فرن خاص  called “tannour” and that’s how the bred got its name. It’s an oven that’s made of clay الطين, in the shape of a hole, underground. The bread used to be stuck around the sides of the oven and when you eat t, it has a distinctive smoky flavour to it. Grandmothers are mainly the ones who make it in an Arab household, probably because of only those with experience can make it.

Now, bakeries المخابز have modern version of this oven which is no longer placed under the ground. It’s said that not everybody can make it and it might take you years to master how to make it! The photo below shows an Iraqi man selling khubz tannour in his stall. 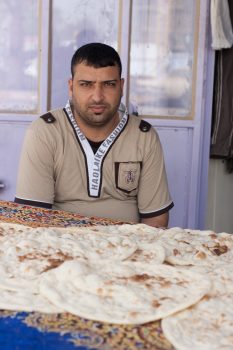