A Chinese Beach Vacation in Xiamen Posted by sasha on Jan 12, 2015 in Culture

It’s so cold in a lot of places right now, especially my hometown of Detroit. As many of us will spend the next few months bundled up in layers of winter clothes, I figured we’d at least take a vacation here on the blog. For a Chinese beach vaca, one of the most popular destinations is Xiamen (厦门 – xià mén), a coastal city in the southeastern province of Fujian (福建 – fú jiàn). As part of our Hong Kong to Kunming overland trip, we took a couple of very scenic train rides to get to Xiamen – first from Shenzhen to Longyan and then on to Xiamen. There are direct trains from Shenzhen, but they tend to sell out early. Making the connection didn’t bother us, though, as we got to enjoy some incredible scenery on the two rides that we probably wouldn’t have seen coming direct from Shenzhen. 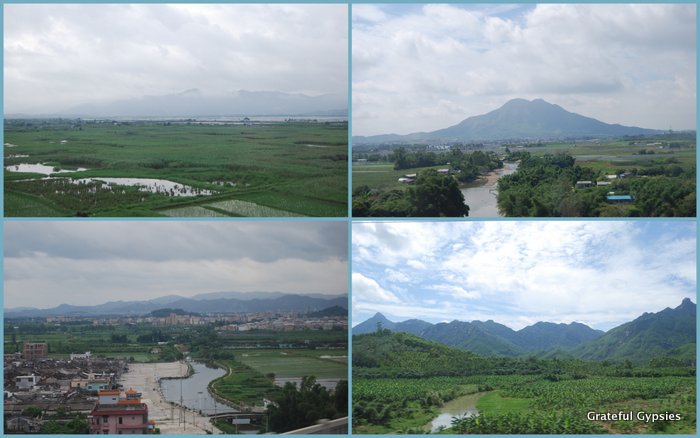 Enjoying the views from the train.

As one of the first Special Economic Zones and an important port city, the name makes sense – it means “the gate to the mansion” and refers to its role as a gateway to China. While much of Fujian remains isolated and less developed, Xiamen has thrived and is a bustling city for both business and tourism. Centered on Xiamen island, there are also four other districts on the mainland plus the small island of Gulangyu (鼓浪屿 – gǔ làng yǔ), our first stop of the trip. 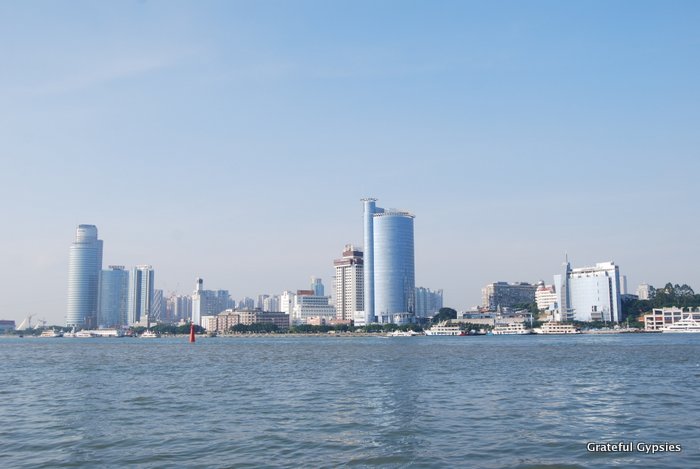 A view of the Xiamen skyline from Gulangyu.

A short ferry ride takes you over to the island, which is far and away the most popular tourist attraction in Xiamen. After the British victory in the First Opium War, Xiamen (which was then known as Amoy) became one of five treaty ports. The island of Gulangyu was designated as an international settlement, and Brits, French, Japanese, and rich overseas Chinese came here to build consulates, churches, and mansions. While you won’t find any Europeans living there these days, much of the architecture remains. 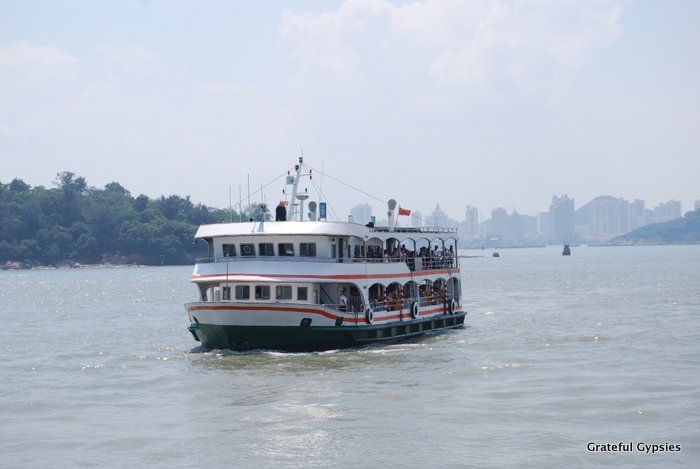 Take the ferry for a few kuai and a few minutes. 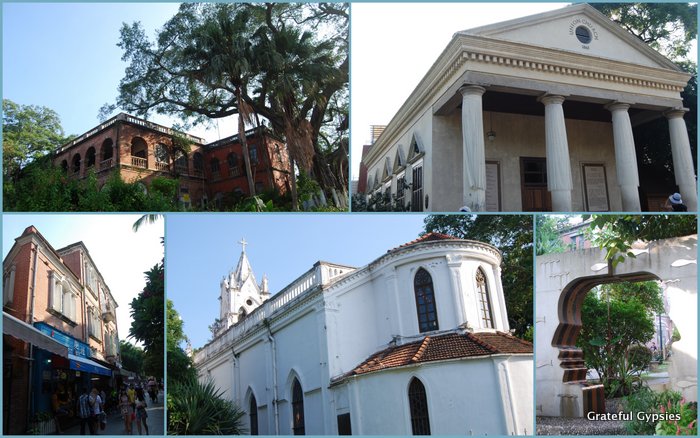 Some old architecture on Gulangyu.

There’s no motorized traffic on the island, making it a nice escape from the usual congested streets of Chinese cities. It’s walkable, but make sure you stock up on water if it’s a hot summer day. Head to the right when you get off the ferry and you’ll be able to enjoy a nice leisurely stroll through plenty of green space. You’ll also find a couple of funky statues scattered around this part of the island, along with great views of the sea and the city skyline. 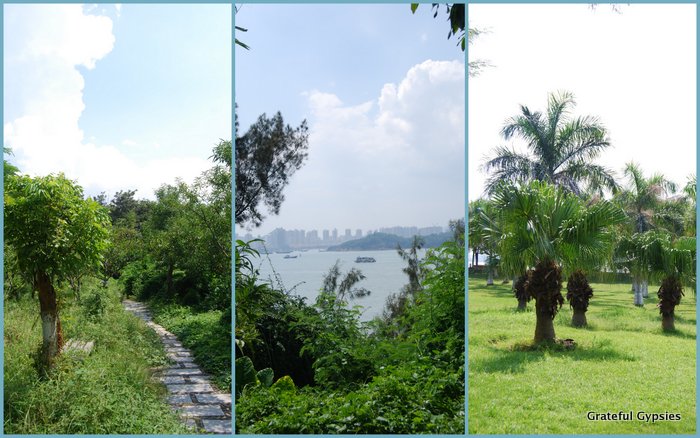 The nice, green part of the island. 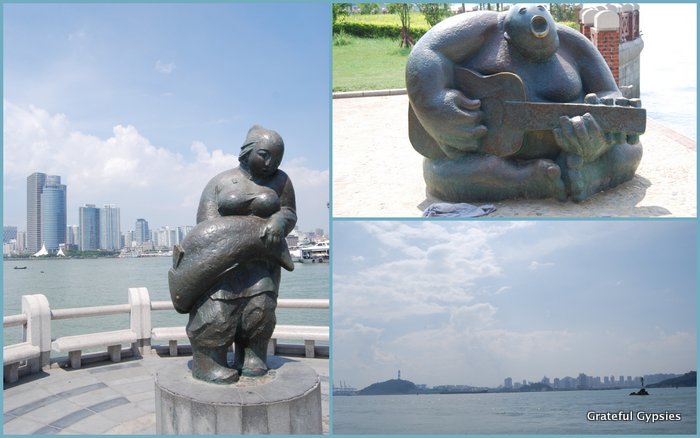 There are quite a few hotels on the island, so if you’re up for dragging your luggage along you can just stay here. We opted to just take a day trip, as prices are definitely higher on Gulangyu than over on Xiamen island. To cool off from the hot summer sun, you can take a dip at one of the island’s beaches. We enjoyed our swim until we noticed some nasty factories pumping out fumes across the sea; at that point we decided to head back to Xiamen to shower as soon as possible. Due to over-inflated prices, we skipped many of the island’s attractions, such as a viewpoint from atop a rock. 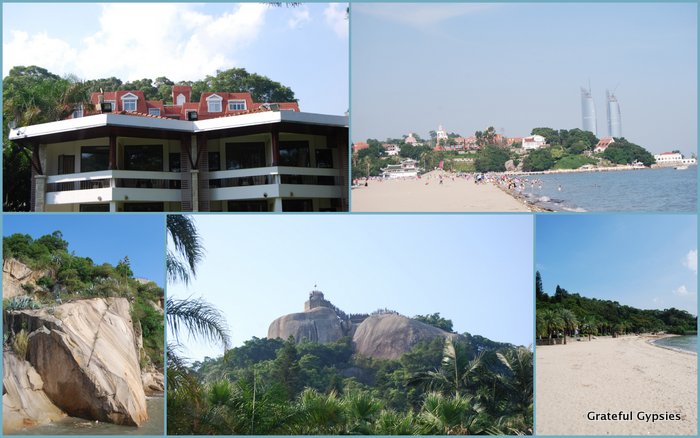 A good place to stay in Xiamen is the Cengcuoan (曾厝垵 – céng cuò ǎn) area. Here you’ll find a wide variety of accommodations, from budget hostels to high-end hotels. The winding streets are for pedestrians only, so the only traffic you have to worry about are the crowds of cowboy hat wearing, selfie snapping Chinese tourists. We crashed at the Youself Inn (that’s not a typo, by the way), which was a decent enough hostel for a few nights. 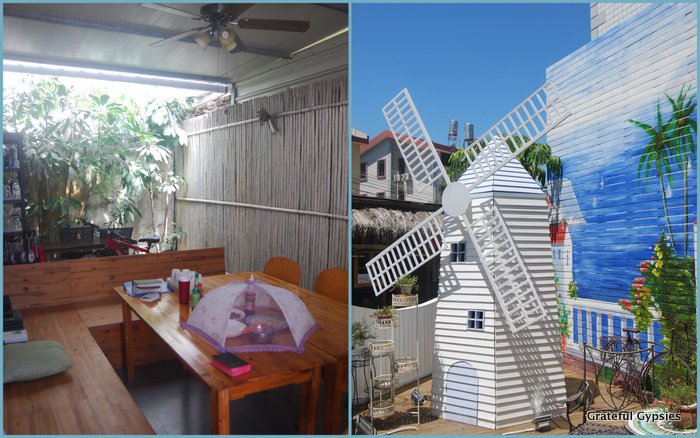 Our hostel in Xiamen.

There’s a bustling night market every day of the week, so you can easily spend your entire evening meandering through the maze of stalls. Your usual assortment of tacky, useless junk is everywhere, and there are also tons of delicious things on sticks. If street food isn’t your bag, you can easily find a restaurant and pig out on fresh seafood. 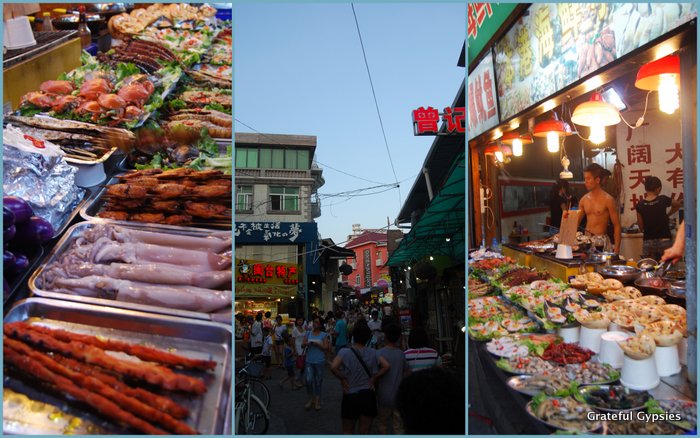 Wandering through the night market.

There’s more to do in Xiamen, including beaches, parks, and temples, so you could easily spend a few days here. Our trip had to move on, though, as the main reason for going to Fujian was to visit the famed tulou villages. Check back in the weeks to come for a few posts, plenty of photos, and a handful of videos about these amazing structures and how to plan a trip there.