Hong Kong to Kunming Overland Posted by sasha on Aug 30, 2014 in Culture

For many people traveling to China, going between Hong Kong and Kunming is a great way to get in and out of the country – especially if on an extended trip around Southeast Asia. As the financial center of Asia and a huge tourist destination, Hong Kong is ideal for beginning a China adventure. Flights from all over the world touch down in HK, you can get a Chinese visa in just a few days, and then you’re just a subway away from entering the mainland in Shenzhen. The provincial capital of Yunnan province, Kunming serves as a perfect spot to end a journey through southern China and head into SE Asia and begin the famed “Banana Pancake Trail.” You can obtain visas for Vietnam and Laos here, and there are also public buses that will take you into these countries (note that the one going to Laos takes a full 24 hours, while entering Vietnam only takes about six). Air Asia also recently added Kunming to their list of destinations, meaning you can get cheap flights to Kuala Lumpur or Bangkok as well. So now you’ve got a great place to both start and finish your travels in China, but what to do in between? There’s a decent WikiTravel article on this kind of trip, which you can read here. Having recently completed the trip myself, here’s a little rundown of the route we took with some pictures and useful tips: 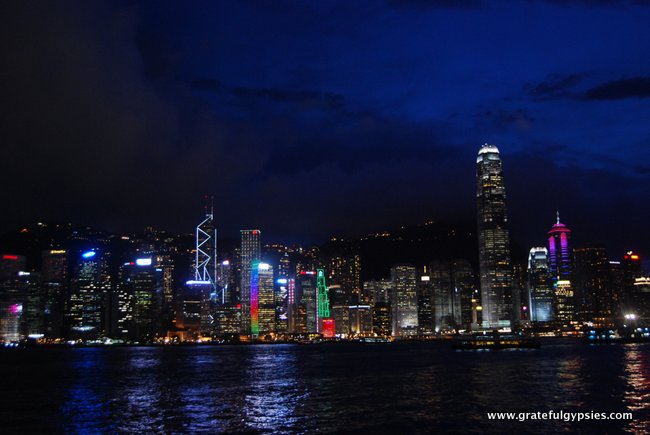 Hong Kong as viewed from Kowloon at night.

Start your trip off with a few days exploring the many different faces of Hong Kong. Whether you’re into history, culture, outdoor activities, shopping, or just wining and dining, you’ll find something in this former British colony and current SAR (Special Administrative Region) of China. Many who visit Hong Kong and the mainland find the two to be like night and day. For first time visitors to China, a few days in HK is a good buffer to get you ready for the madness ahead – the city is a mix of East and West and a bit more, shall we say “civilized” than the rest of China. Make sure you give yourself enough time to visit Hong Kong, Kowloon, and at least one of the surrounding islands. Lantau is an easy day trip and has plenty to keep you busy. 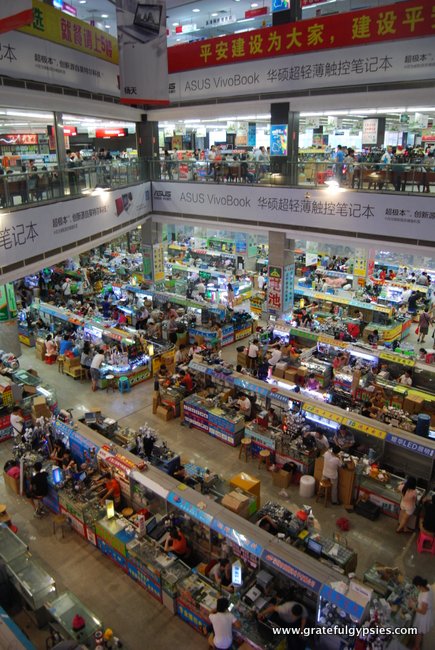 One of Shenzhen’s many bustling markets.

Once you’re ready to take the plunge and head over to the mainland, you can just hop on the subway, clear customs, and end up in Shenzhen in a couple of hours. When you arrive, you may find it hard to believe that this place was a mere fishing village some 30 years ago. Back in 1979, the Chinese government decided to make Shenzhen a “special economic zone” due to its proximity to Hong Kong. Fast forward a few decades, and it’s a bustling metropolis with a population of nearly 15 million. If you’ve got a few days to spend here, you can balance your time visiting some of the cool theme parks like “Splendid China,” shopping for cheap electronics, feasting on tons of delicious food, and hitting a bar or two in the evenings. From here, you have tons of options for continuing your journey by train or bus. 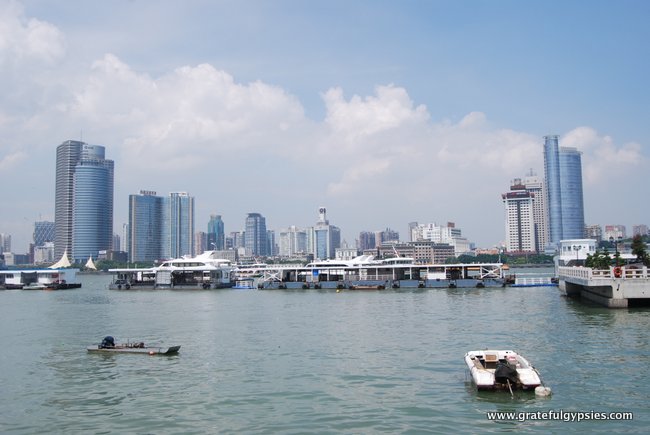 Skyline of Xiamen from Gulangyu island.

Although this might not seem like the most logical next stop, it works out nicely thanks to the new high speed trains that connect Shenzhen to this island city in Fujian province. Also an SEZ, this city has flourished thanks to its tourism industry and Taiwanese investments over the years. Kick back on the beach, munch on fresh seafood, wander around night markets, and take a day to explore the small island Gulangyu (鼓浪屿 – gǔ làng yǔ), which is free of motorized vehicles and just a short ferry ride away. For us and many other visitors to Xiamen, the main reason to come here is its accessibility to the next destination. 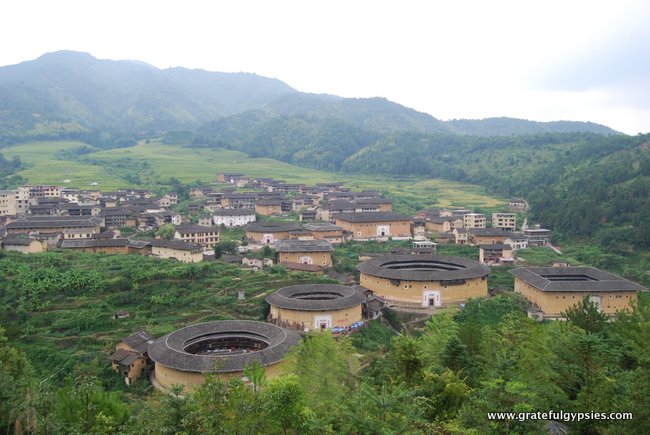 One of the many tulou villages.

The tulou, or “earthen buildings” are amazing structures built by the Hakka (客家 – kè jiā) people throughout southeastern China. These massive compounds are basically an entire village in one building. They are usually circular or rectangular and consist of multiple levels that house up to 80 families. Although you can find them all over Fujian province, 46 of them have specifically been designated as UNESCO World Heritage Sites as they are “exceptional examples of a building tradition and function exemplifying a particular type of communal living and defensive organization [in a] harmonious relationship with their environment.” You’ve got to see these places to believe it, and it’s much better to stay nearby a cluster of them for a few nights instead of just taking a day trip. From the small cities of Longyan or Yongding, you can catch an overnight train to your next stop. 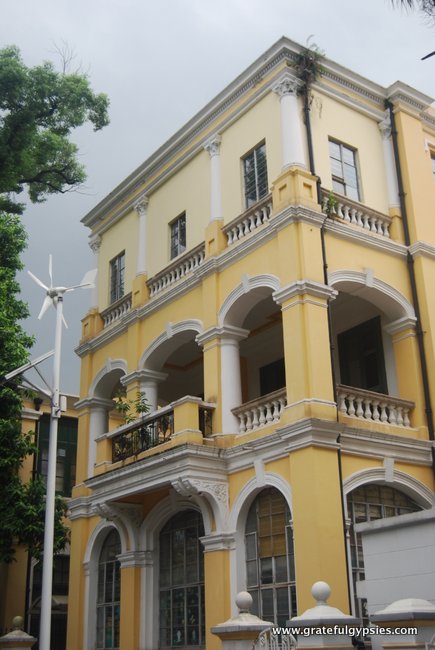 The third largest city and the capital of Guangdong province, Guangzhou is hard to avoid if you’re set on doing the trip overland. Although many travelers seem content to simply see the train or bus station here, there’s more than enough to do here to warrant sticking around for at least a day. Wake up to a dim sum brunch, then take a few hours to stroll along the peaceful streets of Shamian island (沙面岛 – Shā miàn dǎo), part of the former British and French concession. Hit a temple or museum in the afternoon for your culture fix, and then hop on the subway to go see the new city and the impressive Canton Tower. If you’re getting sick of terrible Chinese beer, you’re in luck in Guangzhou – head to the Strand Cafe for delicious imported brews and craft beer on tap that’s made locally. Buy your bus ticket a day in advance, as the next destination is quite popular. 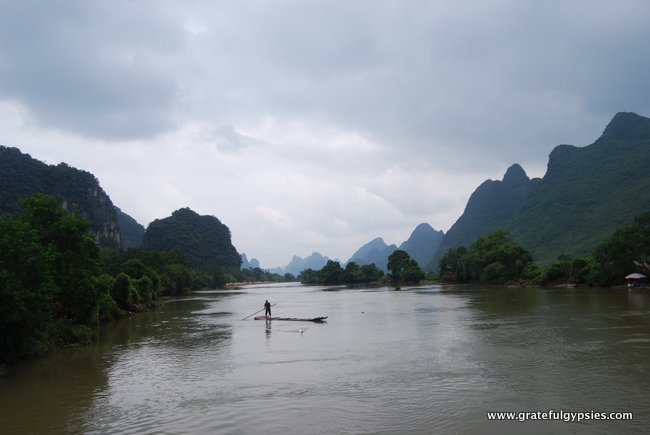 If people tell you not to come here, politely ignore them.

Forget the train to Guilin and take a direct bus (6 hours) to Yangshuo. When people say that Guilin has the “best scenery under Heaven,” they’re actually talking about the surrounding areas in Guangxi, especially Yangshuo. Made popular by rock climbing backpackers a few decades ago, this once sleepy town has grown into one of the most popular tourist destinations in China for both domestic and foreign travelers. Don’t let the tour buses and crowds scare you away, though – just hop on a bike and cruise for a few minutes and you’ll find yourself lost in a village amidst some of the most stunning scenery on Earth. The Li River and the karst mountains that surround it are so famous, in fact, that they were put on the back of the 20 RMB note. This is not the place to sit down and relax, as there’s just so much to do outside. You could easily blow a whole week here, but plan on at least four nights. 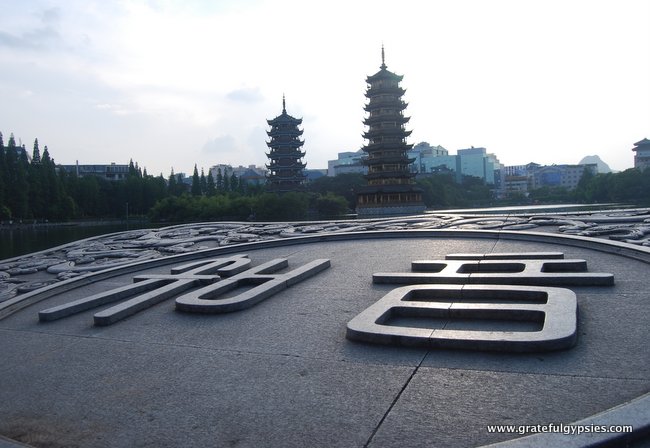 Guilin isn’t that bad, but don’t waste too much time here.

Many foreign tourists arrive in Guilin and are quite disappointed to find that it is just another massive, congested Chinese city. Avoiding it is tricky, however, as this is where you’ll find the closest train station and long distance buses. It’s worth it to spend at least a day here, as there are some nice parks, a cool pedestrian street with lots of great food, and plenty of hostels where you can unwind from your big trip in Yangshuo. 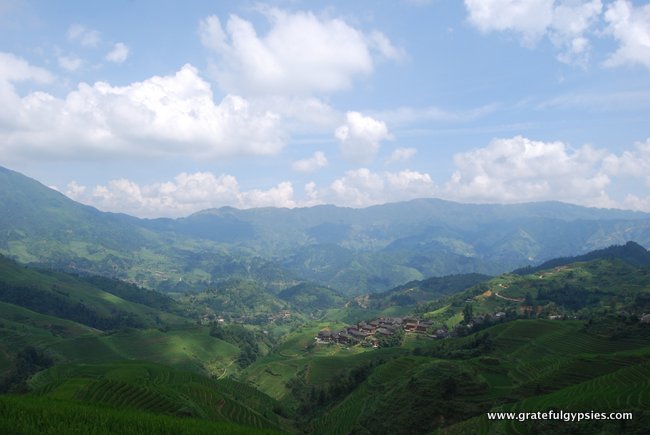 Rice fields as far as the eye can see.

Get out of Guilin to check out the incredible rice terraces that are scattered amongst Zhuang and Mao villages in north Guangxi. In the spring when the paddies are full of water, the landscape is said to resemble the scales on the back of a dragon, hence the name – “dragon’s back rice terraces.” The local people have realized the money-making potential of their homeland, so there’s a developing tourism infrastructure here. This has its pros and cons – it’s easy to find a guesthouse to stay in the village, but you’ll also have to crop the cable car out of your pictures. Thankfully you’re just a short walk away from total peace and quiet out in the stunning rice fields. Day trips are possible, but you’re cheating this place if you don’t at least stay one night. Get back to Guilin on the early bus so you can catch the 4:30 train that runs overnight to your next stop. 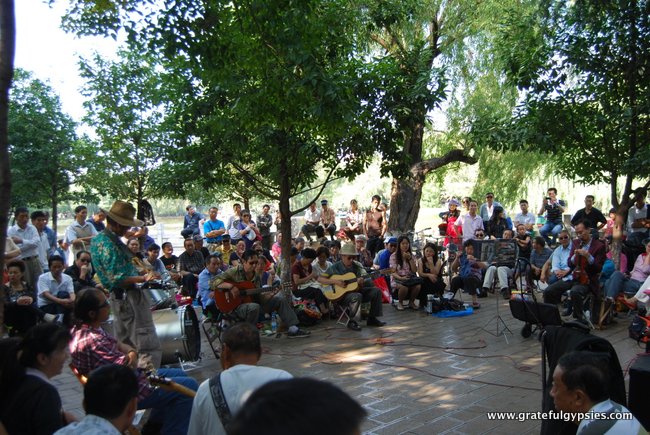 Jam session in the park – just another Saturday in Kunming.

The “Spring City” is famous throughout China for its mild weather and proximity to tons of amazing places in Yunnan province. It feels more like an over sized small town than a big city, and the chilled out pace of life here often messes with travel plans; we liked it so much on our first visit that we decided to move here! There’s plenty to do in the city to keep you busy for a few days and arrange your onward travels. As previously mentioned, it’s a great jumping off point for SE Asia. If you’ve got more time on your Chinese visa, though, you’ll probably want to stick around and spend at least a week exploring Yunnan.

This trip was done in just under three weeks, completely by train and bus. While jumping from Shenzhen up to Xiamen may not seem to make the most sense, we were meeting up with more people who were coming from Qingdao, so it was an easy and logical spot for us all to meet. Plus we really wanted to visit the tulou, and Xiamen is the best place to do that from. It should be noted that we had a hell of a time getting train tickets from SZ to Xiamen. Although there are 30-something trains per day, they were all completely sold out for the entire week, so we had to first take a train to Longyan and then transfer to another in order to get to Xiamen. Ditto for bus tickets from Guangzhou to Yangshuo – there are buses every 30 minutes but we had to wait six hours to get on one. Buy tickets in advance if possible for these popular routes. With more time, there are plenty of other options for places to visit in Guangdong, Fujian, Guangxi, and Yunnan. Having lived and traveled in China for nearly five years, I can say that these are some of the most interesting and beautiful parts of the country. Check out a map of the route below, and keep an eye on the blog in months to come for tons of pictures, stories, and videos from all of these places.