As the world’s second largest country (covering 9.6 million square kilometers) and the most populous (over 1.3 billion), China can be an intimidating place to travel in. It is a massive, crowded country, and there’s so much to see and do that one could spend an entire lifetime wandering the Middle Kingdom and still not take it all in. With 56 ethnic groups and hundreds of amazing landmarks – both natural and man made – China is a difficult place to explore to say the least. Thankfully, you can get a great taste of what the country has to offer by visiting just one park. In an effort to highlight all of the country’s ethnic groups and some of the most impressive sights, the Splendid China Folk Village (锦绣中华民俗村 – jǐn xiù zhōng huá mín sú cūn) was opened in Shenzhen (深圳 – shēn zhèn), a huge city in the far south of China in Guangdong province. 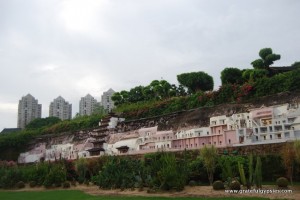 A little taste of Splendid China.

This impressive theme park consists of two zones – the China Folk Culture Village and the Miniature Park. It is a huge park and you’ll need to spend at least half of a day here, although it’s probably best to just devote an entire day so you can explore both sides at your leisure, catch a handful of the daily performances, and take a few breaks to have lunch or drink some tea. The major travel and tourist company in the country – China Travel Services – developed and manages the park. Here’s a description of each side of Splendid China along with a collection of photos to help give you a better idea of what you can see and do there: 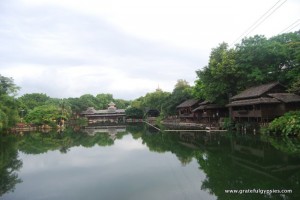 Just one small part of the massive Splendid China park. 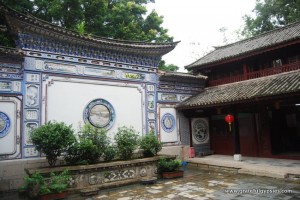 Inside one of the traditional houses.

The China Culture Village (中国民俗文化村 – zhōng guó mín sú wén huà cūn) takes you on a journey around the country where you can visit the 56 ethnic groups. Replica villages are set up throughout the park, where you can see the traditional architecture, clothing, artwork, and more for each group. Walking through the many displays, you’ll quickly realize just how diverse the Chinese population is – simply labeling all 1.3+ billion people as “Chinese” doesn’t really tell the true story. Wander through replica hill tribe villages, check out a Mongolian yurt, and much more. 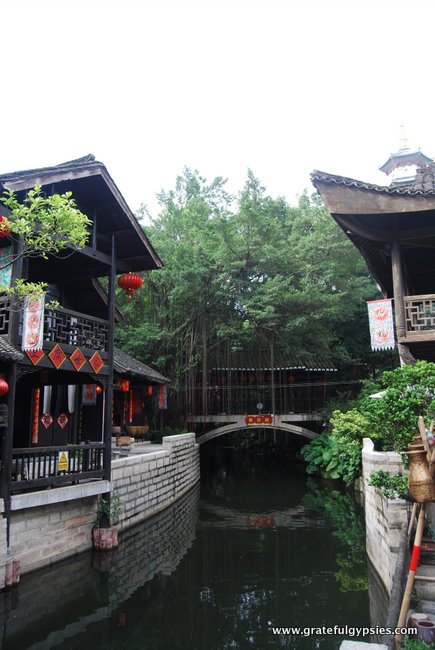 Many quality replicas of villages from around China can be found here. 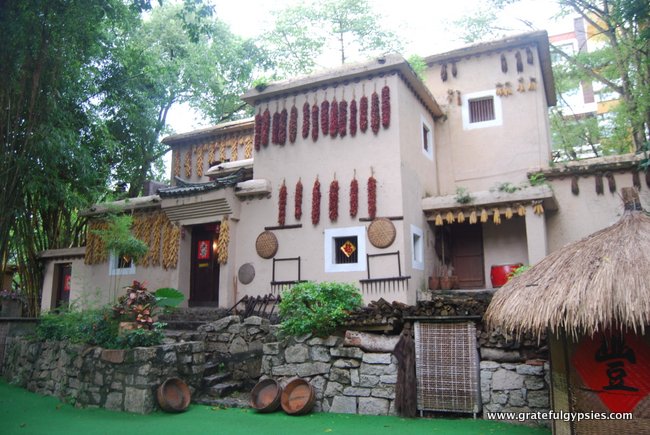 Exploring the vast culture of China. 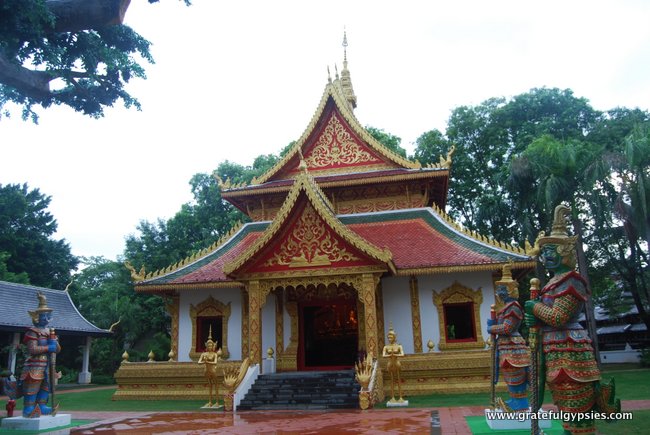 A Buddhist temple of the Dai people. 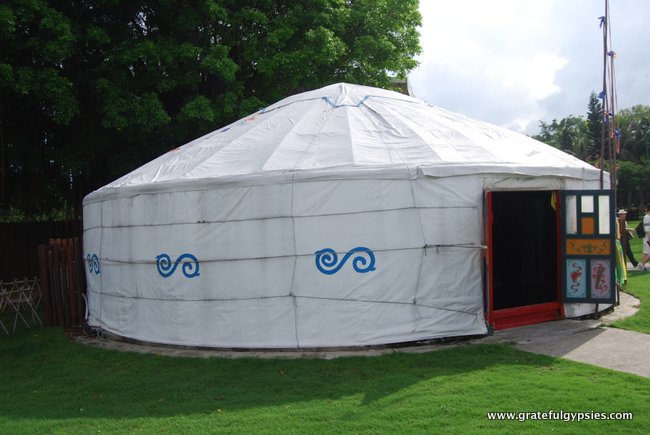 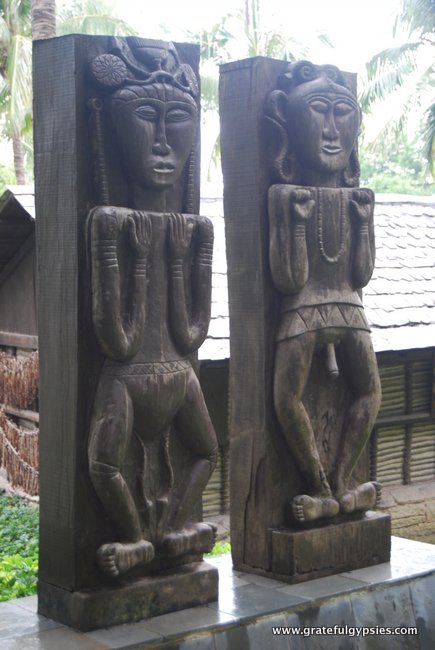 The best part about a visit to this side of the park is definitely the variety of performances you can catch throughout the day. These shows may introduce music, dance, games, or other aspects of daily life in the various ethnic groups. Note that most of these performances occur earlier in the day, so it’s best to visit this side in the morning if you’d like to see a few of them. On our recent visit, we arrived in the afternoon and were able to see a performance in the Li (黎 – Lí) village (an ethnic minority group from Hainan) where they demonstrated how to crack coconuts, make fire, and play traditional games. We also caught the Mongolian horse show, an impressive display of horseback riding, archery, and a mock battle. 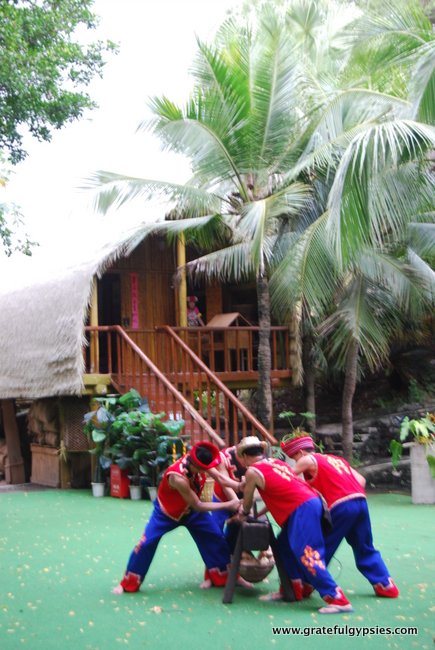 Watching a performance in the Li Village. 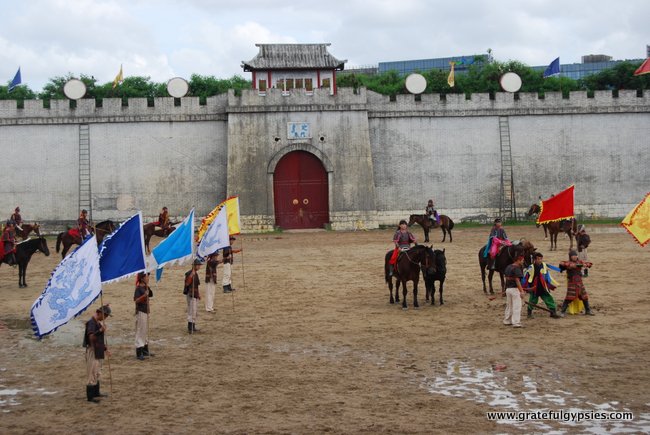 The start of the epic horse show that goes on twice a day.

While the cultural village is quite interesting, you’d better make sure you save plenty of time and energy to explore the other side of the park. 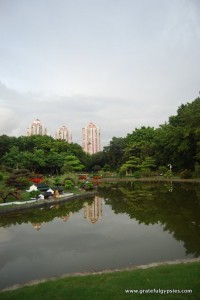 Tour all of the great landmarks of China in just a few hours by exploring the Miniature Park. As it’s set up according to the geography of China, you can go in a circle and take a trip all around the country. You’ll find nearly 100 miniature models of famous sights, built on a scale of 1:15. Check out natural marvels such as the Three Gorges (三峡 – sān xiá), Li River (漓江 – lí jiāng), or Stone Forest (石林 – shí lín), as well as some of the country’s most legendary places like the Forbidden City (紫禁城 – zǐ jìn chéng), Temple of Heaven (天坛 – tiān tán) or Great Wall (长城 – cháng chéng). There are also lesser known but amazing sights like the Buddhist Longmen Grottoes (龙门石窟 – lóng mén shí kū) or the Fujian Tulou villages (福建土楼 – fú jiàn tǔ lóu). 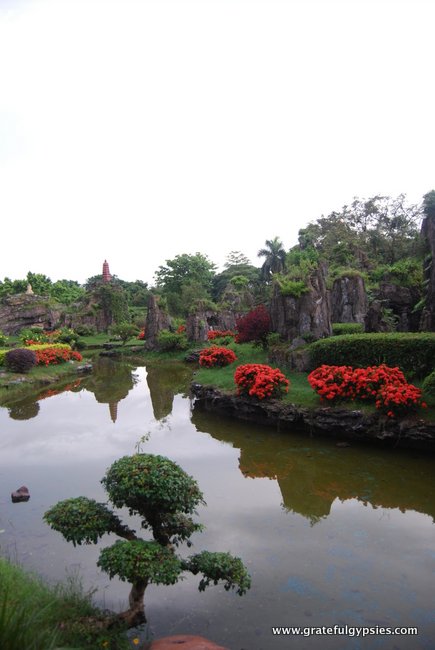 The Li River in miniature. 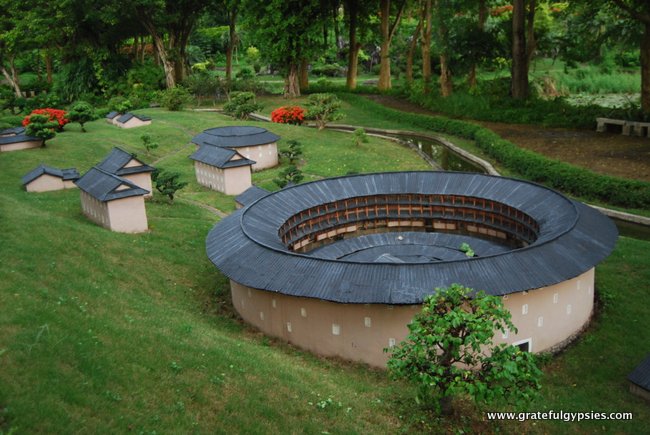 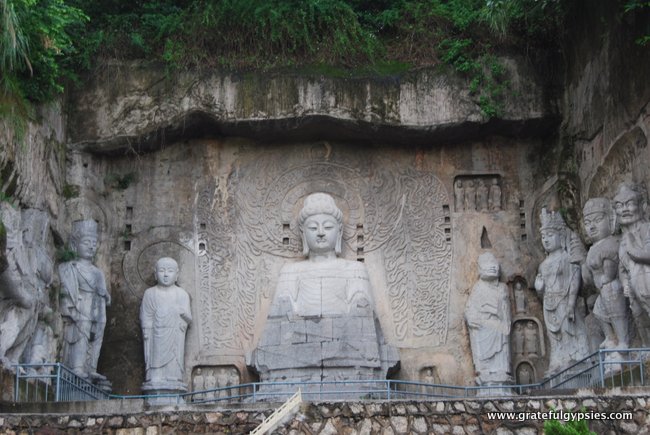 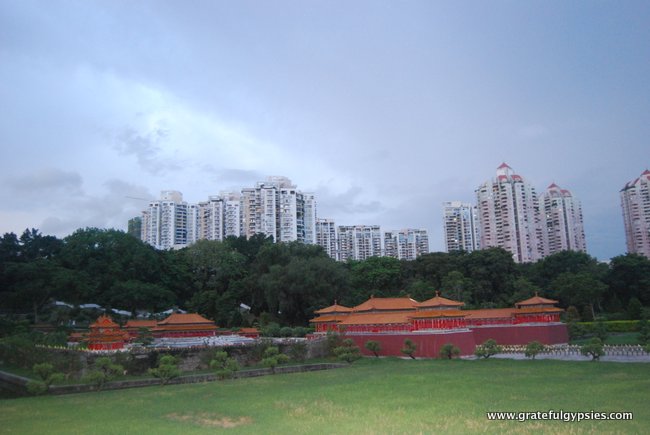 The park’s Forbidden City, set against the backdrop of modern Shenzhen. 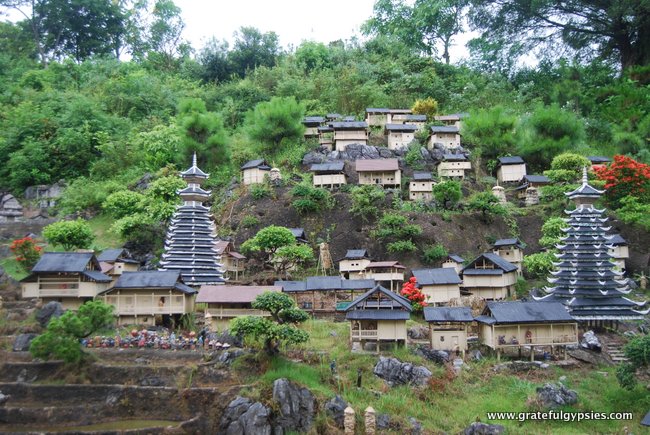 It really is an impressive sight to behold, even more so when you take a minute to remember that all of these places actually exist… in one country! Although you’ll probably be pretty tired by this point in the day, it’s worth it to drink a Red Bull or coffee and catch a third wind to see the grand evening performance.

In the area between the two sides of the park, you’ll find a large stadium as well as some small shops and a stage. Before the big show, you can sit down and enjoy a short performance of Peking opera and get a snack or something to drink. 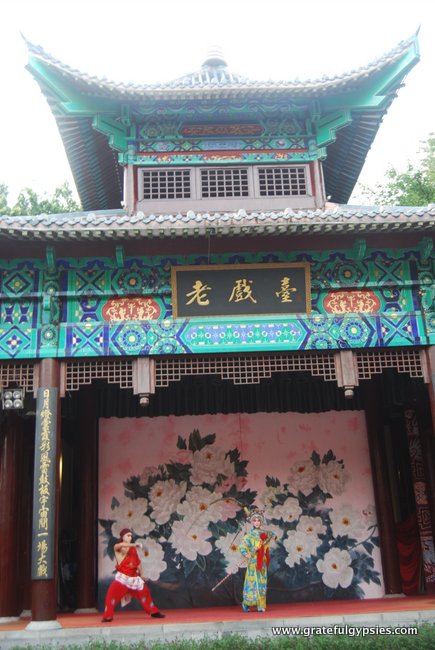 Every night at 7:30, you can watch the amazing “Dancing with the Dragon and Phoenix” (龙凤舞中华 – lóng fèng wǔ zhōng huá). No expenses have been spared for this grandiose performance, which takes the audience on an historical tour of China through music, dance, acrobatics, and lots of lazers, pyrotechnics, and more. The show alone is worth the price of admission, so a visit to this park really turns out to be a great deal. If you’re like me and you love taking photos and videos, make sure you have a spare battery for the show – I took so many pics and videos in the park that I was left with dead cameras for a majority of the performance. 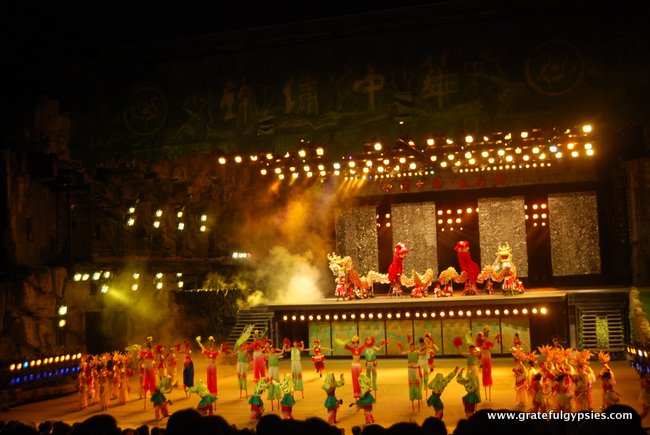 A shot from the evening performance. 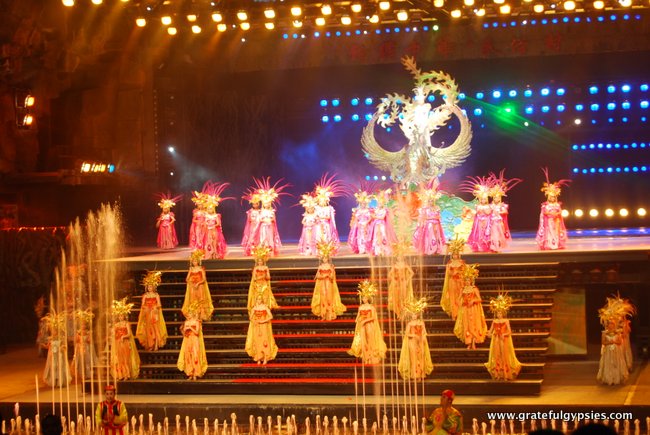 It really is an impressive show.

Even after living in China for nearly five years and traveling extensively, a visit to this park reminded me that there is still so much to see and learn about the Middle Kingdom. This park comes highly recommended for anyone visiting Shenzhen. Keep an eye on the blog in the upcoming months for a few videos to show you even more of this awesome theme park. 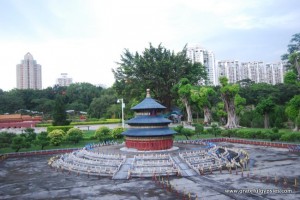 Opening Hours: The park is open every day – on weekends from 10AM-9:30 PM and on weekends from 9:30-9:30. The park opens at 9AM during National Holiday week and stays open until 10:30 during the summer months.

Cost: Admission fees are 180 RMB for adults and 90 RMB for children or elderly.

Directions: The park is located just besides the Overseas Chinese Town (华侨城 – huá qiáo chéng) subway stop. There are also public buses that stop nearby, and any taxi driver in the city should know it.