A Guide to the Internet in China – E-Commerce Posted by sasha on Jul 25, 2014 in Culture

We’ve talked a lot about the Internet in China recently, so here are the previous posts in case you’ve missed any of them:

We’ve just about covered it all, but there can’t be a discussion about the ‘net in China without talking about e-commerce. This is certainly a hot topic in the worldwide business community, and it’s crucial for anyone who wants to do business in China to learn more about the online market.

It’s a few years old, but this video gives you a rough idea to how big e-commerce is in China.

Just last year, China topped the United States as the world’s top e-commerce market, with a total value of online shopping just under $300 billion. That’s a lot of kuai, and it doesn’t look like things are going to let up any time soon. With the explosion of smart phones, tablets, and other mobile devices that are constantly connected, more and more Chinese people prefer to do their shopping online than in person.

A short discussion on e-commerce in China on CNN.

According to Forbes, by the end of the year e-commerce will account for 10% of all retail sales in China. That’s not all, though – this article from China Briefing states that, “e-commerce in China will be worth US$540 billion by 2015, and by 2020 worth more than e-commerce in the U.S., the UK, Japan, Germany and France combined.” Those are astounding figures, and of course these high numbers are attracting more and more attention to e-commerce in China. When this topic comes up, there’s always one name that comes to mind first…

The Alibaba Group (阿里巴巴集团 – Ā lǐ bā bā jí tuán) is a massive group of e-commerce businesses with a share of about 80% of the Chinese market. Founded by Jack Ma in 1999, this online giant did more in sales in 2012 than both eBay and Amazon – combined! The Economist even goes so far as to predict that Alibaba could be one of the world’s most valuable companies by next year, right up there with Apple. Last year on Singles’ Day (11/11), the company did 35 billion RMB in sales in just 24 hours. That’s about $5.75 billion, and that was just one day. After failed talks with Hong Kong, the company is gearing up for its IPO in the USA, which some investors believe could be valued at over $200 billion.

A great and insightful video on Alibaba and its IPO.

All of those staggering numbers and business jargon are interesting and all, but exactly how and what are Chinese people buying online? 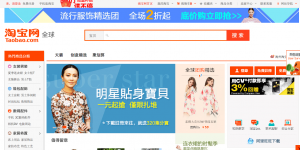 A look at Taobao’s home page.

Taobao (淘宝网 – táo bǎo wǎng) is the driving force behind Alibaba’s success. This online shopping giant (similar to eBay and Amazon) is not only the top place to shop online in China, it’s one of the ten most visited websites in the entire world. Back in 2003 when eBay purchased Eachnet (the online auction leader at that time in China), Alibaba launched Taobao to compete with the American e-commerce behemoth. Knowing the Chinese consumer much better, the folks working on Taobao introduced a variety of features that quickly won over the Chinese market and drove eBay out entirely within a few short years. It allows for free listings of services and products, and there is an instant messaging service on the site that allows buyers to communicate with sellers directly and in real time. Another big draw was its launch of Alipay (支付宝 – zhī fù bǎo), an escrow-based online payment system that ensures sellers do not receive payment until buyers have received their goods and are satisfied with the transaction. You can find just about anything on Taobao, and you’d be hard pressed to find someone in China who hasn’t used it. It’s not just city dwellers who are seriously into e-commerce in China, which brings us to our next topic…

A great short titled “The Life of Taobao Couriers.”

All across China, there are places that have come to be known as “Taobao Villages.” According to Alibaba, these are rural areas where at least 10% of households have online stores and the village rakes in more than 10 million RMB in total sales per year. While the rapid urbanization of China is a topic that has been covered ad nauseam, this growing trend in rural China hasn’t received quite as much air time. Farmers are leaving the fields in favor of setting up their own online Taobao shops, more jobs are coming to these villages, and even young people – who just a few years ago wanted nothing more than to escape to the city – are deciding to return home to help out in the e-commerce venture. People in the big cities enjoy buying locally made crafts from rural areas, and in recent years there has been a huge hike in demand for fresh, locally grown produce after many scares about food safety. Just check out this article from Business Week that tells the story of two elderly, illiterate villagers who joined a joint Taobao shop in their village to sell their vegetables.

Even former farmers are cashing in on the e-commerce explosion. Watch this interesting video from the Financial Times.

It’s obvious that e-commerce is here to stay in China, and it will be interesting to see how this changes the business landscape not only in the country, but around the world. Stay tuned to the blog as we finish up our “Guide to the Internet in China” series with one final post about looking for love on the ‘net.