Yesterday, I introduced a lot of vocabulary words and grammatical structures for how to tell the time. I focused mainly on the different parts of the day, asking for/giving the time, and talking about daily activities. At the end of the post, I gave you 10 examples to practice. Here are the answers:

In this post, I’ll introduce some more advanced vocabulary and structures for talking about time.

When we talk about work, class, or other obligations, we often have to use the phrase, “from… to…” (从… 到 – cóng… dào). Here are a few examples of how to use this phrase in Chinese related to time: 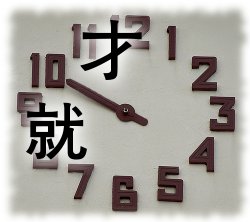 Use these two characters to talk about the time.

In English, you might hear someone say something like, “My dad gets up so early in the morning, but I like to sleep in.” So, how can we express these ideas of doing something early or late in Chinese? Well, there are two important characters that you can use: 才 (cái) and 就 (jiù). Let’s take a look at how to use these characters when talking about the time:

This character is used to express that something happened early or quickly. It can also mean that everything goes as one expects. Here are a few examples to help you understand how to use it:

As you can see, each example here expresses that something happened early or quickly. You may also have noticed that 就 is always followed eventually by 了. That’s an important part of this grammar, and you’ll see why in a minute…

Not surprisingly, this character is used with basically the opposite meaning of 就 – it means that something happens late or slowly. It can also mean that things have not gone your way (i.e. the bus broke down, so you were late for work). Here are some examples to contrast with the others:

As you can see, when contrasted with the previous examples, all of these actions seem slow and/or late. You probably also noticed that none of these sentences use the particle 了. That’s just the way the grammar goes with this one.

Look at the follow examples, and decide whether you should use 才 or 就 to fill in the blank:

Of course, there are other ways to use both of these characters. As you’ve probably realized by now, Chinese characters are quite versatile – they can be used in a variety of ways. For now, just try to familiarize yourself with this particular grammar function of these characters. If you’d like to learn a bit more about how to use them, check out this awesome video from YouTube Chinese teacher Lao Wang:

That’s a lot to handle for one lesson. To make sure you understand how to use these words and grammatical structures, here are some examples for you to try yourself, in Chinese:

Keep an eye on the blog next month for the answers and more posts to help you out with your grammar and vocabulary. In the meantime, be sure to keep up with us on Facebook, where you can learn a new word everyday, check out pictures, practice your Chinese, or ask questions.