An Intro to the Chinese Zodiac Posted by sasha on Feb 12, 2018 in Culture

One tradition associated with the Spring Festival that almost everyone knows about is the Chinese zodiac (生肖 – shēng xiào), a 12-year mathematical cycle that relates each year to an animal. Of course, there’s an interesting story in Chinese folklore that explains the order of the animals: 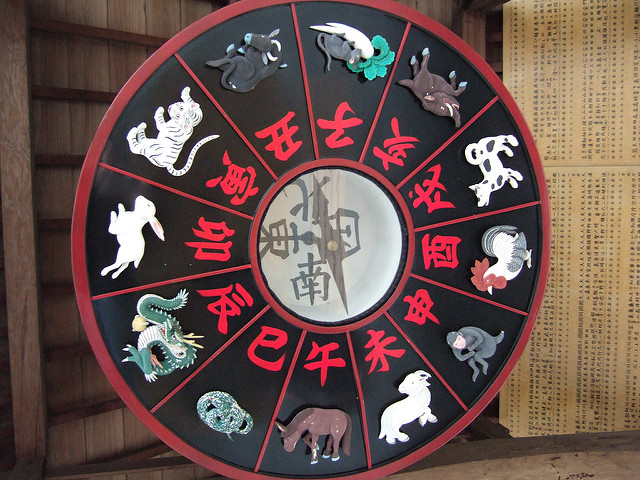 As the story goes, the gods decided to have a contest to see which animal could cross a river first. The winner would be first in the cycle, and then the next eleven would go in order. Seeing as how the rat was the smallest of the lot, the other animals figured he was a shoe-in for last place. When the race started, however, the clever rat hopped on the back of the ox. Just as the ox was about to jump onto the riverbank to claim victory, the rat leaped off of his back and stole the race. The tiger and the rabbit finished in third and fourth, respectively. Not surprisingly, the slow and lazy pig finished in dead last. Here’s the official listing of the animals in order:

A funny animation about the race between the 12 animals (in Chinese with Chinese subtitles).

So, which animal are you? Here’s a chart with the Chinese zodiac and the years for each animal:

Each animal has distinct characteristics, and you will adopt those based on which year you were born in. Here is a short description of some of the traits associated with the 12 symbols of the zodiac.

As China follows a lunar calendar (阴历 – yīn lì), you have to check more specifically to see exactly which animal you are. The zodiac isn’t as simple as a 12-year cycle with 12 different animals, though. You also have to take into account the five elements (五行 – wǔ xíng):

Each of the five elements represents a planet: wood is Jupiter, metal is Venus, water is Mercury, fire is Mars, and earth is Saturn. The five elements are naturally occurring phenomena, and they are thought to have both a generating (生 – shēng) and an overcoming (克 – kè) influence on each other. For example, wood generates fire, while water overcomes fire. 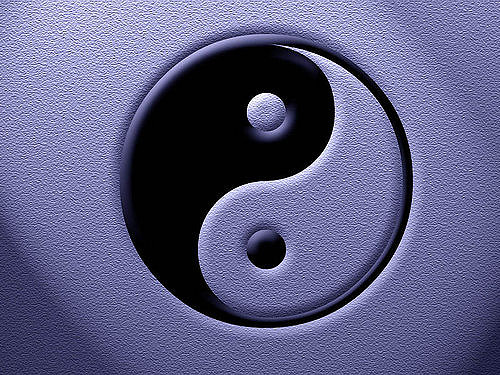 In addition, you also have to consider the yin and yang (阴阳 – yīn yáng) form of each element. Since the cycle is divisible by two, each animal can only be either a yin or a yang – the rat, tiger, dragon, horse, monkey, and the dog represent yang, while the ox, rabbit, snake, goat, rooster, and the pig represent yin. When you combine the five elements with the yin and yang, you get the ten Heavenly Stems (天干 – tiān gān). These have no English translations, so the Chinese pinyin is usually used:

As such, this creates a 60-year cycle – 5 elements times 12 animals. Confused yet? I know I am. Here’s an easy to follow guide that helps you understand the elements and their corresponding yin or yang:

Once again, you have to be careful when matching up dates on the Chinese calendar. This is basically only if you have a January or February birthday, as the actual Chinese New Year always falls during one of those months. As I was born on August 6, 1985, I’m an ox, and my birth year was Yin Wood. As 1985 was a year of Yin Wood Ox, that means the next year with such a description will happen in 2045 – 60 years later. Got it yet?

So what do you do with all of this information? Well, there is the Birth Chart (生辰八字 – shēng chén bā zì – lit. “the eight characters of birth time”), which are also commonly called the Four Pillars of Life (四柱命理学 – sì zhù mìng lǐ xué). The four pillars are the year, month, day, and hour of one’s birth. If you thought you only have a Chinese zodiac for the year you were born in, think again; there’s also one for the month, day, and hour of your birth.

Each of these pillars is represented by both a Heavenly Stem and an Earthly Branch (the zodiac signs). All together, these can tell a person’s destiny or fate. While that may seem overwhelming, thankfully there are an abundance of online calculators to help you figure out all of your signs, such as this one. If you want to know what this all means, well then you’re just going to have to find a Chinese fortune teller to assist you in your quest to learn your fortune with the ancient Chinese method of Zi Wei Dou Shu (紫微斗数 – zǐ wēi dòu shù). 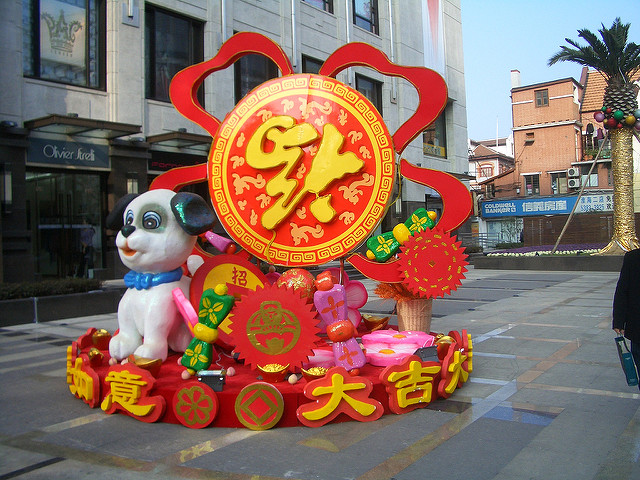 Image from Christopher on flickr.com. Attribution 2.0 Generic (CC BY 2.0)

This year, when you celebrate the beginning of another Year of the Dog, just remember that there’s a lot more to it than just one animal for one year…