Beijing Kao Ya: A Delectable Duck Posted by sasha on Mar 18, 2021 in Culture, Food, Travel & Geography

When one thinks of Beijing, a few things immediately come to mind – the Great Wall (长城 – cháng chéng), the Forbidden City (故宫 – gù gōng), and the city’s most famous dish – Beijing roast duck (北京烤鸭 – běi jīng kǎo yā). There are plenty of excellent Chinese dishes out there, but it’s hard to top this one! Today, we’ll take a closer look at this delectable duck. 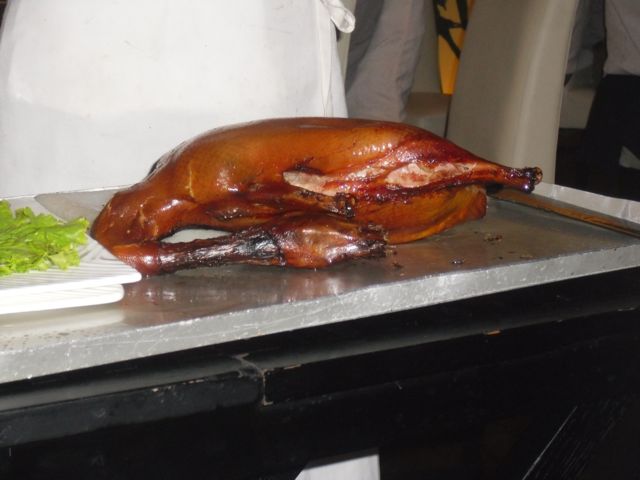 Cooked and ready to go!
Image by Sasha Savinov

Just like much of Beijing, there’s a long history behind this culinary masterpiece, as it’s believed that China has been roasting ducks since way back in the Southern and Northern Dynasties (南北朝 – nán běi cháo), circa 420-589. This custom – which originated in what is today Nanjing – eventually found its way north to Beijing, where it became a hit with the emperors of the Yuan Dynasty (元朝 – yuán cháo). Back then, it went by a different name – Shaoyazi (烧鸭子 – shāo yā zi – lit. “burning duck”). From then on, it was a constant fixture on Imperial menus. 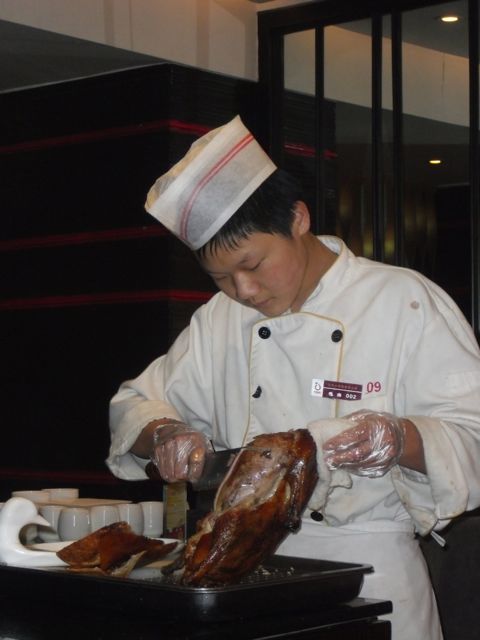 Slicing up the roast duck.
Image by Sasha Savinov

The first restaurant specializing in the Imperial bird opened in 1416 in the Qianmen (前门 – qián mén) area of Beijing, and it’s still churning out roast ducks to this very day. Named Bian Yi Fang (便宜坊-  bián yi fang), the original now has plenty of competition, as countless restaurants in the capital have the famed fowl on their menu.

Amongst Beijingers, you have those who are dedicated to the original, while others prefer either Quan Ju De (全聚德 – quán jù dé) or Da Dong (大董 – dà dǒng). Eating roast duck doesn’t have to be a grand occasion these days, though, as you can pick one up in your local market fresh out of the oven, or you can even grab a preserved one in a bag from your local grocery store.

I’ve had roast duck in several places around Beijing and I’ve got to say that Da Dong is my personal favorite. I’ll admit I’m a bit biased as I used to live a few blocks away and I also love the free boxed wine they let you enjoy while you wait for a table. Check out this video I put together about an evening there. It’s an oldie but goodie!

To make the perfect roast duck, a lot goes into raising the birds, preparing them for the oven, cooking them, and finally, serving them right to your table.  The newborn ducks live in a free-range environment for the first 45 days of their lives. For the next 2-3 weeks, the ducks are force fed four times a day, so they’re nice and plump by the time they’re ready. 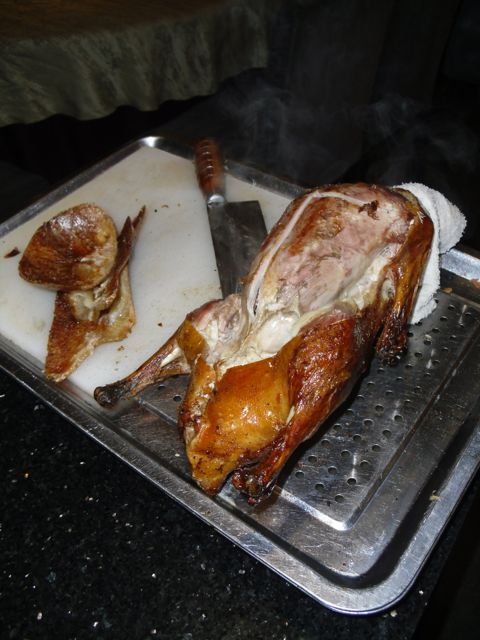 A dish fit for an emperor!
Image by Sasha Savinov

After the duck is cleaned and plucked, air is pumped under the skin to separate it from the fat. Then it’s rinsed and dried again, and finally the skin is glazed with a layer of sugary syrup. Now that it’s ready to go, the bird is left out for 24 hours.

At big name restaurants such as the aforementioned three in Beijing, half the fun of going out for kao ya is watching the expert chefs cook, prepare, and serve this world-famous dish.

A great, informative video showing you how a local Beijing restaurant prepares their ducks.

Originally, the birds were cooked in a convection oven, until a new method of hanging them over the flames of an open oven was adopted during the Qing Dynasty. Today, both methods are employed, so you can give each a try and choose which one you prefer. In the traditional style, wood is burned at the base of the oven to preheat it.

After the fire burns out, the duck is placed in the oven where it is slow cooked. As for the more modern approach, the ducks are hung in an open oven which is fueled by the wood from fruit trees. For the old-school style, head to Bian Yi Fang, while you can try the open oven birds at both Quan Ju De and Da Dong.

So, now that the delicious duck has arrived at your table, how do you go about eating it? 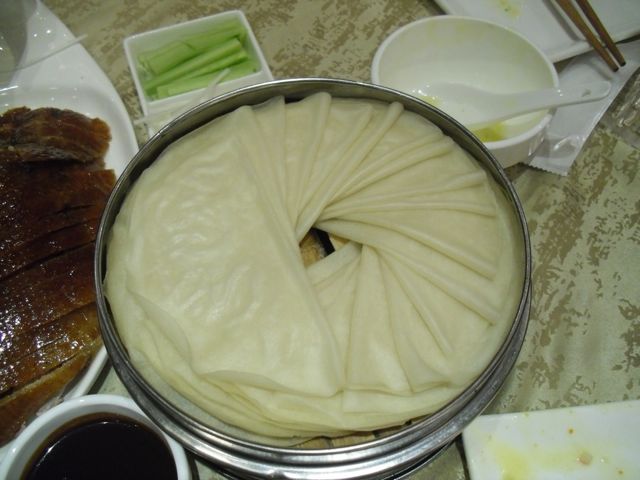 A bunch of bings.
Image by Sasha Savinov

In more upscale roast duck restaurants, the bird will be carved right besides your table. While it’s being sliced up, your waiter or waitress will bring out various items that are meant to be eaten with the duck. 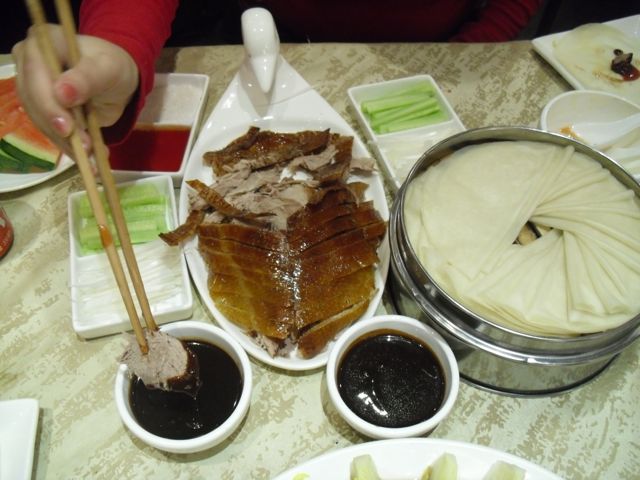 There you have it!
Image by Sasha Savinov

Here are the Chinese names for all of the tasty morsels that come along with your roast duck:

Now, the real fun starts. First, grab a steamed pancake with your chopsticks and open it up on your plate. Next, take a piece of the crispy skin, dip it into some sugar, and place it in the pancake. Add a few pieces of sliced spring onion and cucumber, and finally, choose a few juicy pieces of duck meat, dip them into the sweet bean sauce, and wrap it all up into a nice little roast duck taco. Repeat this process until all ingredients have been eaten and everyone is stuffed. 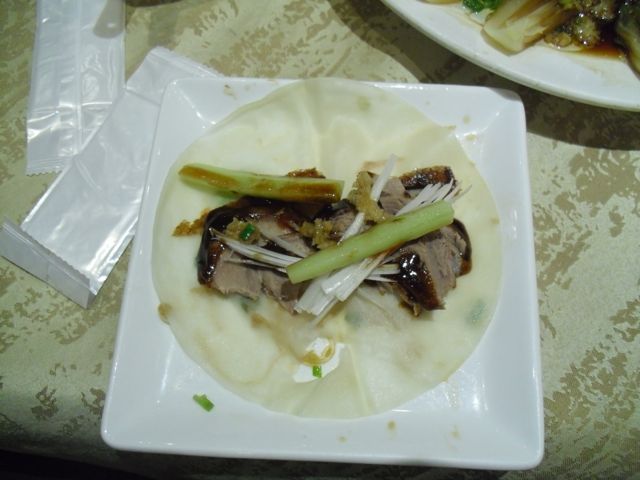