Our long, strange trip around the Middle Kingdom continues, as we visit all of the provinces, municipalities, SARs, and autonomous regions that make up this massive country. Last time, we reviewed all of our progress so far and explored the fascinating land of Inner Mongolia. Today, we’re heading back down south to check out Guangxi (广西 – guǎng xī). 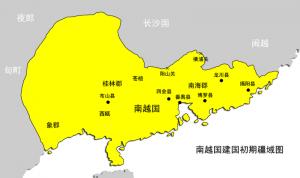 As far back as the first millennium BC, the area now considered Guangxi was inhabited by people known as the Hundred Yue (百越 – bǎi yuè). At the time, the area was known as Lingnan (岭南 – lǐng nán). After the unification of China under the first emperor Qin Shihuang, the region became part of China. That wouldn’t be the end of the Baiyue, though – with the collapse of the Qin Dynasty, a military commander named Zhao Tuo (赵佗 – zhào tuó) formed the kingdom of Nanyue (南越 – nán yuè), which spanned the modern day areas of Guangdong, Guangxi, and Yunnan. The kingdom was a mix of both Yue and Han people, and intermarriage was both encouraged and very common. Eventually, most Yue people were sinicized. In 111 BC, the kingdom was destroyed by Emperor Wu of the Han Dynasty (汉武帝 – hàn wǔ dì).

The current name of the area can be traced back to the Song Dynasty, as they called the area Guangnanxi (广南西 – guǎng nán xī) – “West Southern Expanse.” Later on, during the Mongolian led Yuan Dynasty, Guangxi province was officially established. In the Qing Dynasty, Guangxi seceded from the empire. A group known as the Old Guangxi Clique rose to power, and they grouped together with Sun Yat-sen to oppose Yuan Shikai’s attempts at a monarchy. After feuding with Sun, the group eventually crumbled and was replaced by a New Guangxi Clique.

Fast forward a few years, and the group found themselves aligned with Chiang Kai-shek and the KMT. In 1929, a Communist uprising led by Deng Xiaoping failed in the region. However, another falling out would happen inside the KMT and the two sides would battle during the Central Plains War (中原大战 – zhōng yuán dà zhàn). Everything changed with the invasion of Japan in World War II, and most areas of Guangxi came under Japanese control.

At the end of the Chinese Civil War, Guangxi joined the People’s Republic of China in 1949, just two months after its founding. In 1959, the Zhuang people (壮族 – zhuàng zú) were the biggest minority in China, and most of them lived in Guangxi. For that reason, the former province was established as an autonomous region.

Learn more about the Zhuang people with Travelogue. 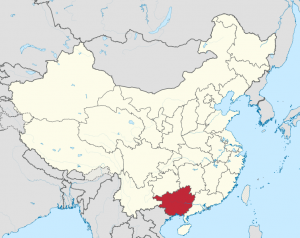 Guangxi on the map.

Guangxi is located in the far south region of China, and it shares a border with Yunnan, Guizhou, Hunan, and Guangdong. In addition, it borders Vietnam in the southwest and the Gulf of Tonkin in the south. The reason that it is a coastal area is because part of the coast of Guangdong was given to the area to provide sea access for trade. Guangxi’s capital city is Nanning (南宁 – nán níng), and it is divided into fourteen prefecture-level cities.

This is a very mountainous region, with the highest point in the Yuecheng Mountains, at 2,141 metres (7,024 ft). The area is famed for its karst mountains, which attract tons of visitors to the small town of Yangshuo. The beautiful scenery along the Li River (漓江 – lí jiāng) is one of the most iconic landscapes in all of China, and it’s even featured on the back of the 20 RMB note. Chinese even go so far as to call this the “#1 scenic spot under Heaven.” 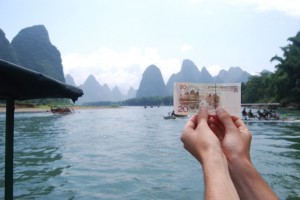 Beautiful scenery on the Li River.

This region of China is considered a subtropical climate. Average annual temperatures here range from 17 to 23 degrees Celcius, and the summers are long and hot. Winters here are mild, making it a good place to visit year-round. However, frequent rainstorms and even typhoons can hit in the summer and fall. Annual precipitation is 1,250-2,700 mm.

Although Guangxi is an autonomous region, it is still majority Han Chinese. In terms of minorities, the Zhuang are still most prevalent here, with over 14 million. In fact, over 90% of Zhuang people call Guangxi home. Other minorities here include the Miao, Dong, and Yao. The strong ethnic minority presence here makes Guangxi a very interesting and diverse area. As of 2010, the total population is just over 46 million.

With its long history and diverse population, Guangxi is a culturally rich area of China. This is especially true when it comes to language. In Nanning alone, three varieties of Chinese are spoken – Southwestern Mandarin, Cantonese, and Pinghua (平话 – píng huà). There are also the various languages spoken by the Zhuang people.

Speaking of the Zhuang, they are known for their singing and dancing, which are best experienced during traditional festivals. The Zhuang people and the other minority groups all have their own distinct clothing, food, language, and customs. A great example of Zhuang culture can be found the nightly Impression Liu San Jie show in Yangshuo.

Perhaps the most famous dish from the entire region is Guilin rice noodles (桂林米粉 – guì lín mǐ fěn). These are ubiquitous all around China and for good reason – they’re cheap, delicious, and they’ll warm you up on a cold day.

Without a doubt, the most popular places to visit in Guangxi are Guilin (桂林 – guì lín) and Yangshuo (阳朔 – yáng shuò). Although Guilin is pretty when it comes to the scenery, it’s just another big Chinese city. One day there is enough to explore the Seven Star Park and eat some famous rice noodles. It’s best viewed as a jumping off point for a trip up the Li River to Yangshuo. 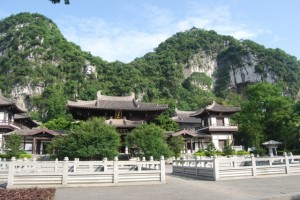 In Yangshuo, there are tons of outdoor activities to do. You can ride a bicycle around the countryside, go rock climbing, swim in the river, or hike to the top of the Moon Hill. Of course, you can also just kick back and hang out on the popular West Street, which is full of shops, restaurants, and bars.

View from the top of the Moon Hill in Yangshuo.

Join my brother and I on a one-day tour around Yangshuo.

A popular day trip when traveling to Guangxi is a trip out to the amazing rice terraces. Of course, there’s much more to see and do in this region of China. Outside of the above-mentioned spots, you’ll definitely find yourself off the beaten path and able to really dive in to experience the landscape, people, and culture of Guangxi.