Chairman Mao – Early Years of the PRC Posted by sasha on Sep 18, 2013 in Culture, Uncategorized

In our first post about Chairman Mao, we went from his birth to the birth of a new nation. Click here in case you missed it. After years of bloody civil war and occupation by Japan during World War II, Mao spoke in front of a massive crowd on October 1st, 1949 and established the People’s Republic of China.

From that day forward, he would be known across the world as Chairman Mao (毛主席 – máo zhǔ xí). He moved into the Zhongnanhai (中南海 – zhōng nán hǎi) compound nearby the Forbidden City, where he had a swimming pool built.

A few months later, the Chairman would make his first trip abroad, as he headed to Moscow to meet with Joseph Stalin. The trip turned out to be a disaster, as Mao was basically humiliated by his Russian counterpart. You can read up on this horrible trip here, and you can even read a translation of the first meeting between the two Communist leaders here. Realizing that he would receive little help from the Soviet Union, Mao headed back to China with the understanding that China’s problems were up to him to solve.

A humorous take on Mao and Stalin’s meeting from the Russian movie “The Red Monarch.” 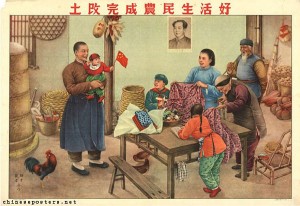 “The life of the peasants is good after land reform.”

Back in China, Mao set about building a new country. The CPC set up a network of branches from the capital of Beijing all the way down to the smallest villages. Party officials passed down the messages from Mao to the people – everyone would have clothes on their back, food on the table, and poverty would be a thing of the past.

Having had a bad experience with arranged marriage in his past, Mao set out to enact reforms to give women more rights and do away with such practices. In 1950, the New Marriage Law (新婚姻法 – xīn hūn yīn fǎ) was passed. According to this new law, both parties had to consent to a marriage.

Perhaps the biggest change, however, came with land reform. In the struggle against the KMT, Mao had won over the peasants by promising them a better life and control of their own land. The landlord class was wiped out, and their land was confiscated by the government and redistributed to peasants. Public humiliation of landlords was common in rural China, and many were even put to death.

Part One of “The Mao Years,” which details some early reforms.

In 1951 and ’52, Mao and the Communists launched the Three-anti and Five-anti Campaigns (三五反 – sān wǔ fǎn) aimed at ridding Chinese cities of corruption and enemies of the state. “What exactly were the three-antis and five-antis?”, you may be asking yourself. Here they are: 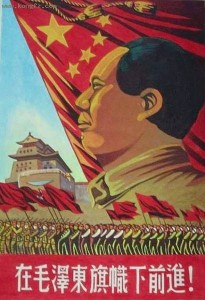 “Let’s march forward under the banner of Mao Zedong!”

The Three-anti Campaign targeted members of the CPC and former KMT who were thought to be a threat, while the Five-anti Campaign basically became an all-out war on capitalism. Those found guilty were either fined, humiliated, sent to labor camps, or in some cases even killed. These campaigns consolidated both the party’s and Mao’s power and strengthened the state’s grip on the economy. While its effect on modern China can be debated, there’s no doubt that these campaigns helped establish Mao as a leader of a new country at that time.

There’s still a lot to be said in the story of Chairman Mao, including the Great Leap Forward, the Cultural Revolution, and his meeting with US President Richard Nixon. In the meantime, make sure you’re learning a new Chinese word every day by clicking here!