Chairman Mao – The Cultural Revolution Posted by sasha on Dec 16, 2013 in Culture

After his disastrous Great Leap Forward failed, Chairman Mao sort of stepped to the side in Chinese politics. He officially resigned as State Chairman and was succeeded by Liu Shaoqi (刘少奇). A few years before this happened, China’s leaders got together at the Lushan Conference (庐山会议 – lú shān huì yì) to discuss the Great Leap Forward. Then Defense Minister Peng Dehuai (彭德怀) wrote a critical letter to Mao about his failed policies. Shortly thereafter, Mao had Peng dismissed from his position, arrested, and replaced by Lin Biao (林彪). Over the next few years, policy-making decisions would be handled mostly by Liu and other moderates Deng Xiaoping and Zhou Enlai. Although it seemed as if Mao had decided to fade away, in reality he was just sitting on the sidelines thinking up his next plan to reassert his authority. 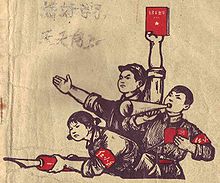 The Red Guards of China.

Fearing that China would go the way of the Soviet Union in a more revisionist direction, Mao decided to attack the current party leadership. In 1966, he launched the Cultural Revolution (文化大革命 – wén huà dà gé mìng), warning that bourgeois elements were infiltrating the government in attempts to restore capitalism in China. Along with the help of his Gang of Four (四人帮 – sì rén bāng) – composed of his last wife, Jiang Qing, along with Zhang Chunqiao, Yao Wenyuan, and Wang Hongwen – he began this campaign. Immediately, Mao began targeting officials whom he claimed to be “counter-revolutionary revisionists” in the government and had them purged. In a drastic move, he also had the nation’s schools shut down, calling on the youth of China to mobilize and support his cause. These groups of students grew bigger and bigger, spreading across the country. They came to be known as Red Guards (红卫兵 – hóng wèi bīng), and they had the full support of Mao.

With the support of millions of eager Chinese youths, Mao set out to destroy the “Four Olds” (四旧 – sì jiù) – old customs, old culture, old habits, and old ideas. Religion fell into this category, and during the Cultural Revolution many temples, churches, monasteries, and mosques were closed down or even destroyed. Propaganda posters were everywhere, encouraging more young people to take up the cause. The Red Guards also targeted the elderly, intellectuals, and foreign governments. At one point, the British Embassy was burned to the ground. Millions of people were apprehended and sent to labor camps, and thousands were executed. Even president Liu was a target, as he was removed from power, beaten, and imprisoned. He would eventually die in prison in 1969. 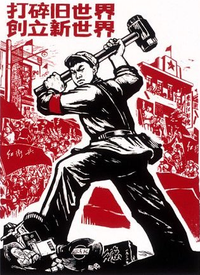 Things were not going smoothly with the Red Guards, however. There were different factions in the group, especially along social and political lines. They also became increasingly violent, and security all around the country quickly deteriorated. Basically, it was mass chaos. Despite this, Mao’s target had been achieved – he had restored his political power.

After Liu Shaoqi was expelled, Lin Biao was named as Mao’s successor. Realizing that the Red Guard movement now posed serious threats, Mao called in the army to quell the unrest. He also launched the “Down to the Countryside Movement” (上山下乡运动 – shàng shān xià xiāng yùn dòng). At this time, “young intellectuals” (students who graduated from middle school) were ordered to move from the cities to the countryside to learn from the farmers and peasants.

Learn about the Culture Revolution with this informative video.

In the end, the Cultural Revolution proved to be yet another disastrous policy by Mao. While there is no clear death toll, it is estimated to be anywhere from 500,000 to 3 million. The Chinese economy basically came to a standstill during these tumultuous years, and it took many years to recover. Countless buildings, artifacts, books, paintings, and more were destroyed. The country’s educational system took a huge hit as well, with the revolution leading to nearly an entire generation of under-educated Chinese. To this day, the after-effects of the Culture Revolution can still be felt in China.

In our next post about Chairman Mao, we’ll look at his famous little red book full of quotations that motivated the Red Guards.