The story of Chairman Mao continues here at the Chinese blog. In case you missed the first three posts, here are the links with a short recap:

After the Three and Five-Anti Campaigns and the Anti-Rightist Movement, Mao had big plans for the new China. After his disappointing meeting with Stalin in the USSR, he wanted China to move away from the Soviet style of Communism and become a modern, industrialized nation with an economy that could rival that of the USA. To do this, he planned to change the Chinese economy from an agrarian one to one fueled by industry and agriculture. For China to prosper, both of these areas had to thrive at the same time – workers needed to be well fed for industry to develop, and new tools were needed for the agricultural workers to succeed.

Originally, Mao had the idea for the state to have a monopoly over agriculture, thus being able to finance modernization of industry. However, it was clear that this policy would be extremely unpopular with the peasant class. As such, it was decided that people would be brought under control of the party by arranging them into collectives. This was gradually pushed through for a matter of years until 1958, when private land ownership was officially abolished and people were more or less forced to join. By the end of that year, 700 million people had been placed into 26,578 communes. 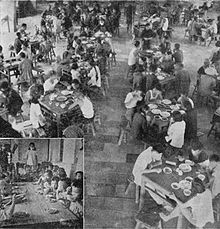 A canteen inside one of the many communes.

In the communes, everything was shared – nobody owned anything. Family life more or less disappeared, as schools, nurseries, and “houses of happiness” for the elderly were all provided so that able-bodied adults could spend the entire day working. Big social changes occurred as well – religious and mystic institutions were banned and replaced with political meetings and propaganda sessions. Workers even heard political speeches as they toiled away in the fields.

All of these changes were part of the Five Year Plan for China from 1958-1963. Eventually, this came to be known as the Great Leap Forward (大跃进 – dà yuè jìn). 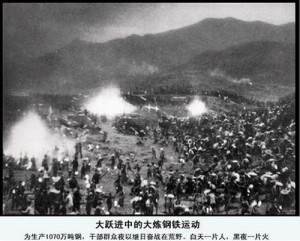 Communes were encouraged to set up “backyard furnaces” in order to produce steel. This was because Mao was determined for China to surpass the UK in steel production within 15 years. As a result of these outlandish targets, useful items such as pots, pans, and other tools were melted down and converted into what amounted to basically worthless junk. Although many commune leaders realized that this plan was doomed to fail, they wouldn’t dare speak up for fear of being called a “bourgeois reactionary” and being thrown in prison. As less people were working in the fields, a mass shortage of food occurred. In addition, much land was destroyed due to the backyard steel production and poor farming techniques. The Great Leap Forward wasn’t turning out so great, after all.

Even though harvests were very poor, local officials turned in exaggerated results as they were under tremendous pressure to hit targets. These inflated results were used as the basis for determining how much grain was delivered to cities and towns, so people in rural areas were basically left to starve. To make matters worse, people had killed off tons of sparrows (as ordered by Mao since they were “pests”) and the locusts that the birds once ate were free to destroy crops. Things got even worse in 1959 when the Yellow River flooded, and again the next year with massive droughts. In short, the Great Leap Forward was a complete disaster. Although there is no official figure, it’s estimated that anywhere from 18-42 million people died of famine in this time.

In the beginning, the Great Leap Forward was meant to serve as a Five Year Plan for China. However, after just three years, it was clear that the policy had been a complete failure. Disgraced, Mao resigned as Head of State, although he retained his Party Chairman position. The day-to-day running of the country was taken over by three moderates – Liu Shaoqi, Zhou Enlai, and Deng Xiaoping. Despite his disastrous policy, Mao was still very popular, and he would use this to his advantage in the next chapter of our tale…