It’s been a while since we’ve talked about Chinese idioms here on the blog, so here are some links for you to check out from past posts:

In each of those posts, we talked about three Chinese idioms. While there are thousands of four-character idioms in the Chinese language, today we’re going to discuss just one:

“Falling leaves return to their roots.”

Let’s break this idiom down character by character to understand it better: 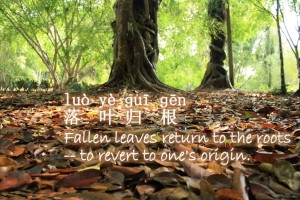 Basically, this idiom is used to describe returning to one’s hometown and/or family. If you’re like me and you’ve spent years living abroad, sometimes you get a little homesick and you just want to go back to where you came from. If and when I ever decide to leave the Middle Kingdom and head home, I can use this idiom to explain my decision, and every Chinese person I talk to will understand completely. We can even see this idiom at work with a recent news story from China…

Recently, a 28-year old man named Luo Gang was reunited with his birth parents. In 1990, at the age of five, he had been kidnapped from his village in Sichuan province and sold to a family 900 miles away in Fujian. Thanks to the one-child policy of China, many families with only a daughter were willing to resort to child trafficking to have a son. Over the years, Luo never gave up the hope of finding his way back home. Just last year, he turned to a website for help – Baby Come Home (宝贝回家 – bǎo bèi huí jiā), which helps lost children reunite with their families. Thanks to a hand-drawn map he had made based on his childhood memories, and help from eager netizens, Luo was able to connect the dots and find his hometown. When he was finally reunited with his birth parents, Luo told reporters, “落叶归根.” He always had faith in this ancient Chinese idiom that he would eventually return home, and he did. Click here to see a fantastic article from the BBC about this story.

There’s even a movie named after this idiom, but it’s called “Getting Home” in English. A more serious version of the classic American flick “Weekend at Bernie’s,” this movie follows a construction worker who tries to fulfill a dying colleague’s wish by returning his body to his hometown.

A book uses this idiom as its title as well, titled “Falling Leaves: Memoirs of an Unwanted Chinese Daughter” in English. Written by Adeline Yen Mah, this is an autobiography about the author’s traumatic childhood. “Falling leaves return to their roots” is a great example of a Chinese idiom that relates to the popular culture and can be used in a very powerful way. Next time you go home to see your loved ones, teach them some Chinese and tell them about this idiom!

More examples of this idiom in use can be found on FluentU – click here to check them out.