In our last post about Chairman Mao, we talked about reforms during the early years of the PRC. From the get-go, Mao had big plans for the new China, as he announced major marriage and land reforms. He had launched China’s first Five Year Plan (1953-1958), which aimed to eliminate China’s dependence on the USSR for agriculture. Of course, not everyone agreed with him and his plans. As he is not known historically as a man who accepted much criticism, it may come as a shock to some to learn that Mao actually encouraged critics of himself and his policies for a brief time. Beginning in 1956, he started the Hundred Flowers Campaign (百花运动 – bǎi huā yùn dòng), which encouraged citizens to openly criticize the government. This name comes from a famous Chinese poem, which reads: 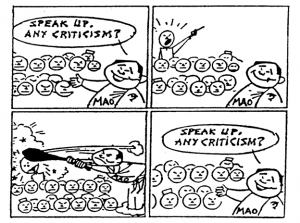 According to Mao, this movement was meant to “promote the flourishing of the arts and the progress of science.” Mao did not want to go the way of Stalin, who had recently been declared “treacherous and murderous” by the new Soviet leader Khrushchev. To advance China and retain his power, Mao needed the intellectual community. For the first few months, the government did not receive many letters of criticism, and the issues discussed were minor and not of great importance. In the spring of 1957, Mao expressed that criticism was, in fact, preferred. All of a sudden, millions of letters began rolling in. Students at Peking University even dedicated a “Democracy Wall” in protest of Mao and the current government. As you can see, things were not exactly going Mao’s way.

In an abrupt change, the Hundred Flowers Movement ended in July 1957. Shortly thereafter, Mao launched the Anti-Rightist Movement (反右派运动 – fǎn yòu pài yùn dòng). People who had been critical of his regime and ideology were labeled “rightists” and were persecuted. Many believe that the whole purpose of the Hundred Flowers Movement was to flush out dissidents. Mao himself even said that he had, “enticed the snakes out of their caves.” About half a million intellectuals, students, officials, artists, and dissidents were persecuted by being imprisoned or sent to labor camps. 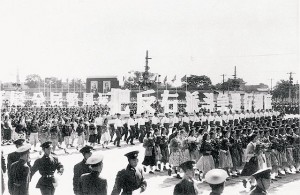 Obviously, this was a big blow to free speech in China, and it is one from which the country has never quite recovered. To this day, the media in the country is very much censored. In fact, the Anti-Rightist Movement itself is a topic that is restricted in the media. With the huge rise in popularity of social media sites such as Weibo, it’ll be interesting to see what happens with regards to free speech and expression in China. In the next post about Mao, we’ll discuss the Great Leap Forward, and later on we’ll dive into the Cultural Revolution.